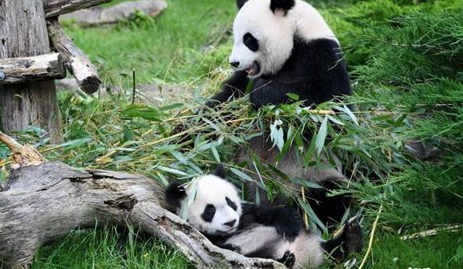 Whether or not a French zoo south of Paris can keep its pandas depends largely on its ability to accommodate the endangered animal and benign cooperation with China, Chinese panda experts said Tuesday as French President Emmanuel Macron was visiting Shanghai.

The 10-year loan of Yuan Zi and Huan Huan, expires in 2022, raising the question of an extension during Macron's visit, French news agency AFP reported on Monday.

After the two black-eyed plantigrades arrived at Beauval zoo in 2012, attendances jumped from 600,000 to 1.6 million visitors a year, its director was quoted as saying by AFP.

The French must talk to China Wildlife Conservation Association, a bureau of China's State Forestry and Grassland Administration (SFGA), an SFGA official told the Global Times on condition of anonymity on Tuesday.

As to whether the pandas could stay, the association failed to reply to the Global Times as of press time.

Apart from filling out all the paperwork, the zoo must offer a qualified home and living conditions for the bears, Diao Kunpeng, a panda expert at the Beijing-based NGO Shan Shui Conservation Center, told the Global Times.

For example in 2017, Netherlands' Ouwehands Zoo built a 9,000-square-meter "Pandasia" for two Chinese bears in a traditional Chinese style at a reported cost of 7 million euros ($7.79 million).

Pandas are like ambassadors or peace envoys, he said, and "help link people from China and the recipient countries together."

"A panda is very picky about what he puts into his mouth and the zoos have to import bamboo or other food from China as pandas are prone to intestinal and stomach digestion problems."

"It is like letting your dear baby live in another person's house," posted one typical user on China's Quora-like platform Zhihu.

"Of course we have to make sure it gets the best."

Benign cooperation with Beijing is also vital, as keeping pandas requires frequent exchanges between breeders, veterinarians and other professionals from the two sides, the experts noted.