CULTURE Fresh and sumptuous seafood goes on the menu

Fresh and sumptuous seafood goes on the menu

As the major seafood producing regions start to lift the summer fishing ban, bumper harvests of seafood await to take home menus to the next level.

Across China, regional marine and fisheries bureaus execute commercial fishing bans that are generally scheduled between the months of May and September to suit their local conditions.

Strictly enforced, this period of time allows the fish, crustaceans and shellfish to recuperate, and fishermen are subsidized for their temporary loss of income.

From September, you can find better seafood and more varieties at lower prices. When crab and fish fresh and sumptuous, they can become centerpieces of your next dinner with little effort.

This week, we are rounding up some of the most popular seafood of the season.

Crabs: Now’s the time to dig in

Now is the right time to dig into suozixie, the gazami crab or Japanese blue crab.

In some parts of China, the gazami crab is also known as baixie, or white crab.

As the most widely and heavily fished crab species, the gazami crab is an everyday delicacy in China’s coastal regions. It is meaty, flavorful and highly nutritious.

Freshly caught gazami crabs are sold alive. They have a grayish green shell, white abdomen and dotted claws. The crabs feed on fish, shrimp, shellfish and seaweed, and are distributed along the majority of China’s coastline.

In aquatic farming, there are bumper and off-year cycles. Last year, the price of gazami crab in Shanghai reached 80 to 100 yuan (US$11.5-14.6) per kilo, due to the fact that it was the off-year cycle. In addition, the Ministry of Agriculture extended the fishing ban period and expanded the category of aquatic products banned.

In 2018, the yield of gazami crab increased significantly, so the price dropped to 40 to 80 yuan per kilo, or roughly five regular sized crabs weighing 200 grams each.

The easiest way to enjoy fresh gazami crabs is simply steaming them. 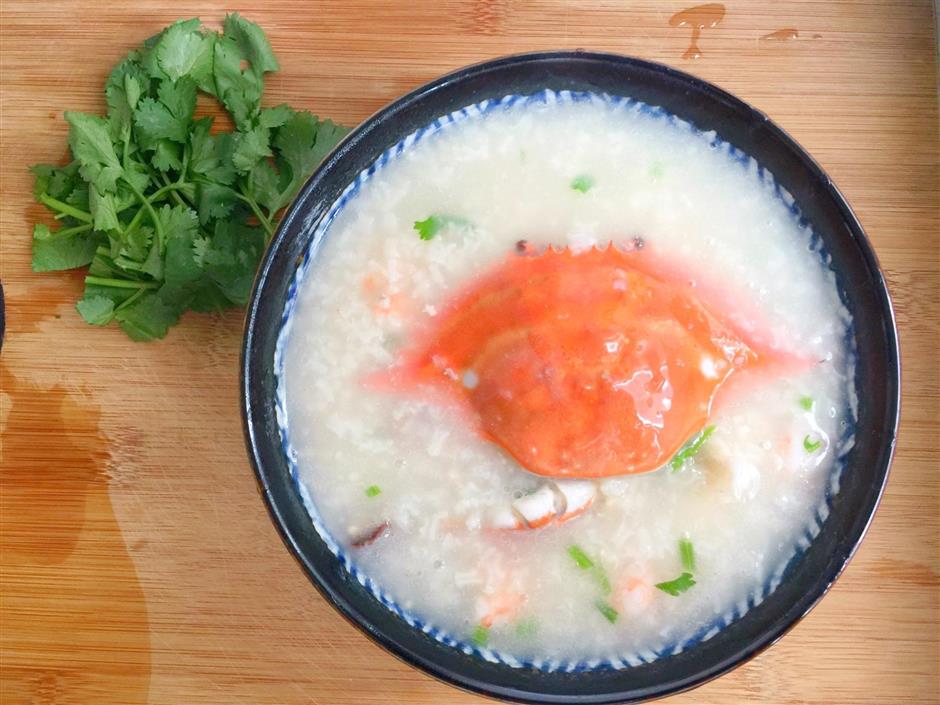 The fishiness of the crabs can be removed by adding slices of ginger and a few strands of green onion in the water that’ll be used in the steamer below the crabs. It takes 15 minutes to fully cook four to five crabs.

When steaming live crabs directly, the claws and feet will fall off. Dead crabs not only are of bad quality, but also can be dangerous. The solution is do not kill the live crabs until right before cooking.

The steamed gazami crabs are served with a dressing of vinegar, ginger and salt. Because crab is a cool-natured ingredient in the view of traditional Chinese medicine, the warm-natured ginger helps to balance it out.

Crab and rice cake stir-fry is a classic dish in Jiangnan, the area south of the lower reaches of the Yangtze River. The highlight of this dish is the rich flavor of the crab infused into the soft rice cakes.

The fresh crabs must be butchered, with internal organs removed and cut into large chunks. The crabs need to be lightly fried in a little bit more oil than one would normally add in stir-fries. When the color turns red, add the rice cakes and season with soy sauce, cooking wine, sugar and salt.

Chaoshan-style seafood congee often stews whole gazami crabs with shrimps and scallops. Using a combination of rice and glutinous rice, make a plain congee and keep it bubbling. The crabs with organs already removed along with shitake mushrooms, ginger and scallops are boiled in the congee till the crabs are cooked, then boil some shrimps briefly and season the congee with salt and ground white peppercorn.

To make the congee even more aromatic, sprinkle finely chopped celery and drizzle a little bit of sesame oil. 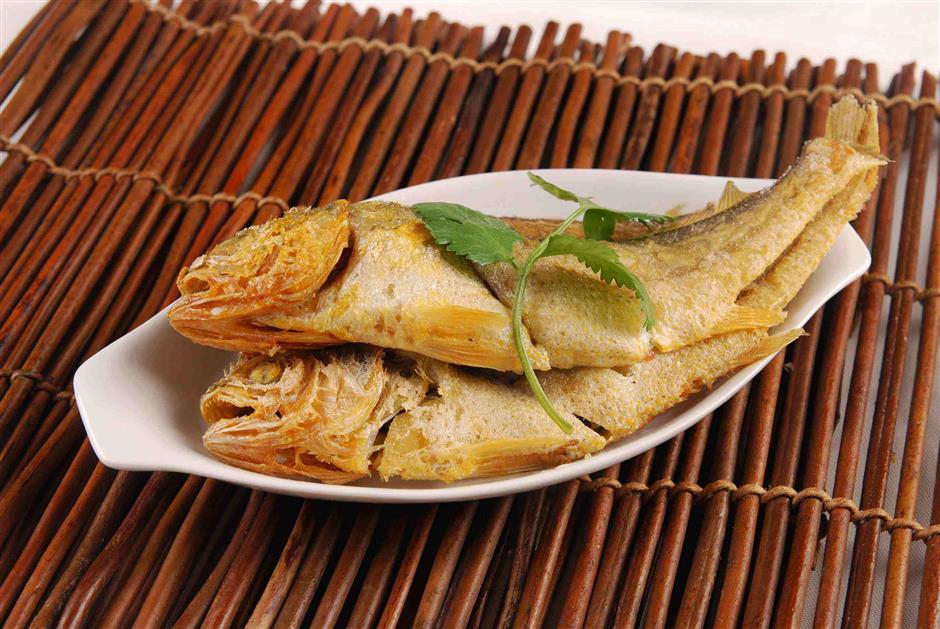 Yellow croaker is a very popular marine fish in China, which has a grey and gold body, gold belly and yellow fins.

The large variety was once an abundant commercial fish in East Asia, but the wild population collapsed several decades ago as the result of overfishing. Now the species is farmed and production is stable. 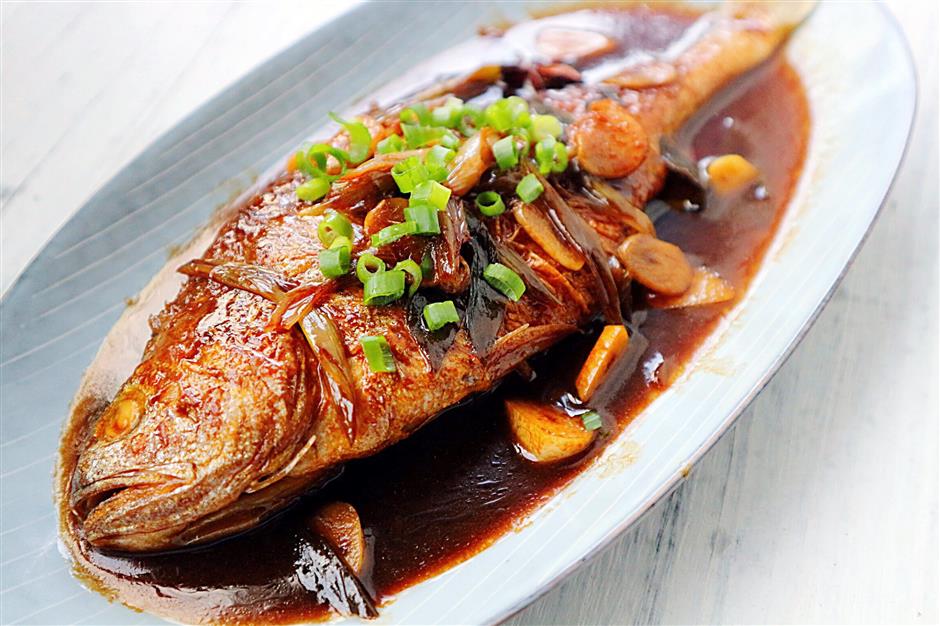 However, some people still seek the wild yellow croaker. The highly scarce fish can cost several thousand yuan each depending on size and weight, while farmed large yellow croaker cost less than 100 yuan each.

The small yellow croaker is also called huanghuayu, or yellow flower fish. It looks similar to the large species, but has larger scales and is very common in Chinese cooking.

Yellow croaker have flaky and tender meat without small fishbones. They are mostly steamed, braised, or fried.

Yellow croaker noodle is a classic Shanghai staple normally made with small yellow croaker. The first step is removing the flesh off the fish’s bone, then briefly marinating in cooking wine, ginger, salt and green onion.

The fish’s head and bones are seared in the pan till gold in color, then made into a soup stock as the base of the noodle dish. The meat of the fish is boiled in the soup.

Another key ingredient that brings rich flavors to the dish is pickled mustard. It is stir-fried to remove moisture, then added into the fish soup. The last step is to assemble the soup, the cooked noodle and fish meat, season with ground white peppercorn.

Small yellow croaker braised with tofu is also found on menus of traditional Shanghainese restaurants. The similar texture of the fish and tofu is harmonious together, and the seasoning is slightly on the sweeter side.

In Zhoushan, dried salted large yellow croaker is also a delicacy called huangyuxiang. After having its internal organs removed and washed, the whole fish is cut in half from the center of the back, then salt is used to preserve the fish and it’s dried in the air.

Huangyuxiang has a different flavor to the fresh yellow fish. It can be steamed with ginger, pan seared in oil, braised with pork belly meat or stewed with vegetables in soups.

The large yellow croaker’s swim bladder can be made into fish maw, an expensive and highly regarded texture ingredient. 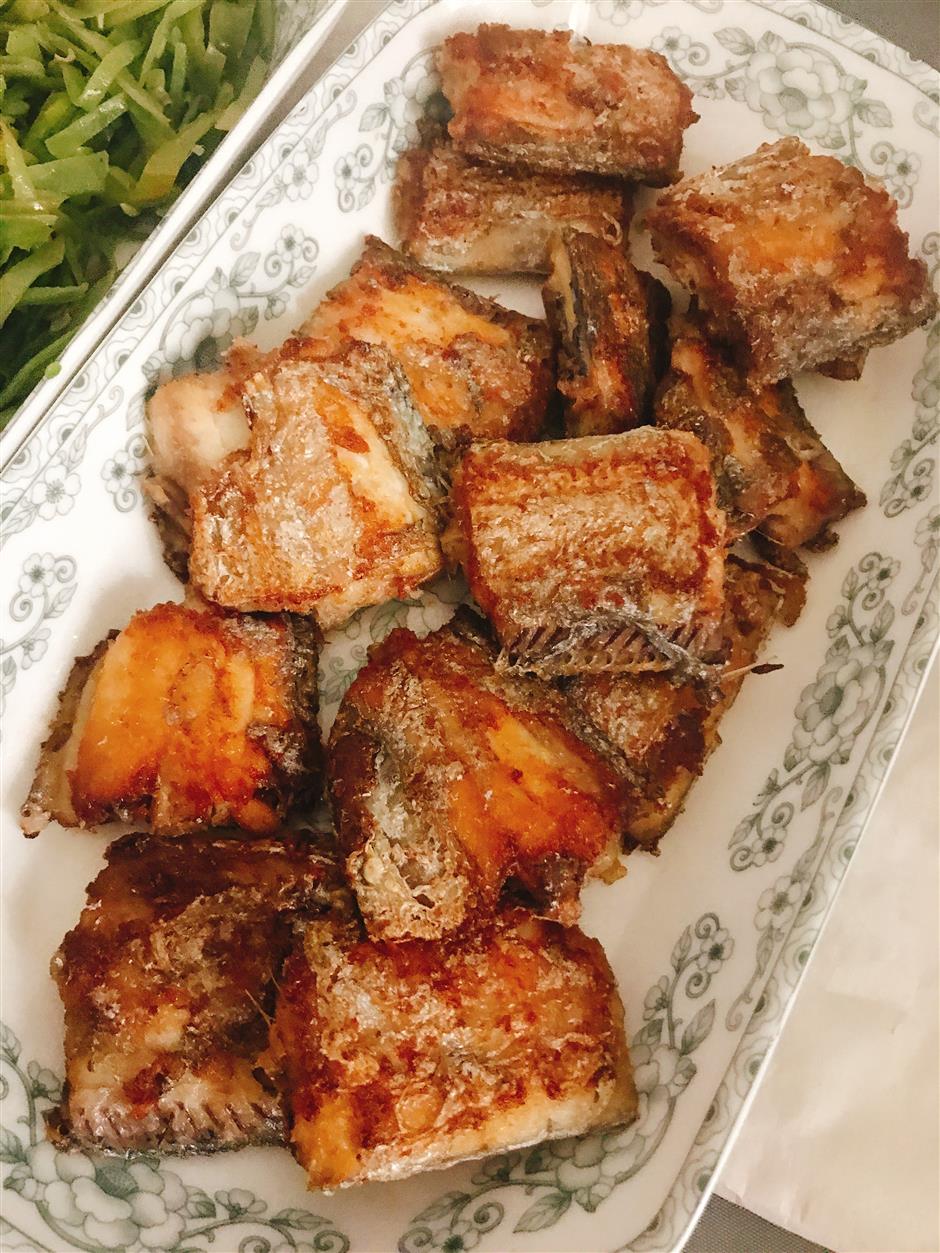 Beltfish, also called large-head hairtail, is another widely consumed marine fish in China. The silver steel colored, elongated fish with pointed tail is packed with the flavor of the sea.

Beltfish can be coated in flour and fried to make a starter dish. Some people remove the scalp of the fish to eliminate the fishy taste, while there are also those who keep the scalp for nutritional benefits.

The beltfish should be marinated in cooking wine, ginger, green onion, garlic and spices, then coated evenly with a thin layer of flour and fried in a nonstick pan with some oil. The key is not to turn the fish frequently to avoid breaking the meat apart.

Beltfish is also steamed with ginger and green onion or braised in soy sauce.

The beltfish fished using bait has better quality than the mass harvest.

Clams and sea snails are among the most easily accessible seafood available in the market. Although shellfish are very cheap, it is easy to make delicious dishes out of fresh catches. In the fall, the various shellfish are also at their best.

The rich umami flavors from saltwater shellfish and molluscs correspond to the amount of organic acids, like succinic acid, in the animals. Common shellfish farmed in China include huage (asari clam) and razor clams.

The shellfish can be stir-fried with lots of dried pepper, garlic and chili sauce on high heat to make flavorful dishes that best accompany beer and wine.

Asari clams are also used in soups with complementary ingredients like tofu. Before cooking clams bought in the farmers’ market or supermarket, it’s important to rinse them and put them in clean water with a little bit of salt to wash out the grit.