CULTURE From bondage to flowers, a fashion bonanza at Coachella

From bondage to flowers, a fashion bonanza at Coachella 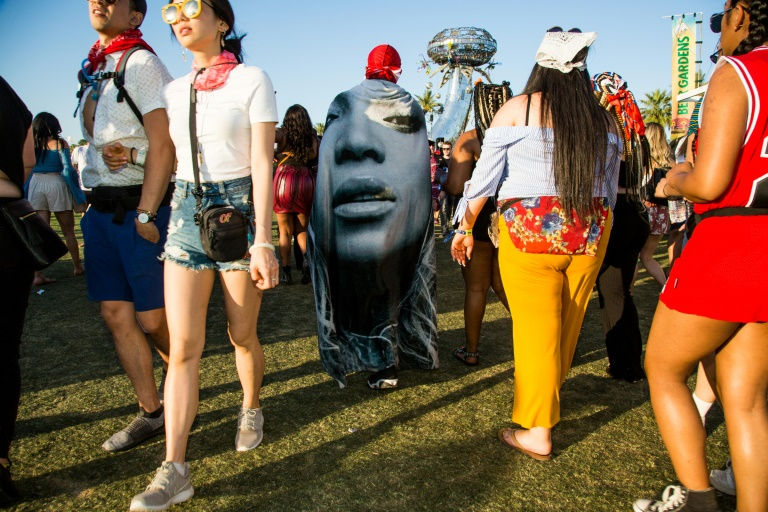 A fan walks through the Coachella festival grounds draped in a Beyonce blanket -- fashion statements are part of the fun at Coachella (Photo: AFP)

Coachella became one of the world's premier music festivals not only for the A-list performers. The two-weekend party in the California desert has become a major event in its own right for the fashion.

While designers have heavily marketed their brands to Coachella, the fans who draw the most notice often do so by embracing their own sartorial flair, driven by a sense of innovation and, among revelers in the searing heat, of inhibition.

They dress in green from head to toe, or at least when they dress at all.

Tiana Tuttle and T.J. Sonnier covered their bodies with green nets over matching swimsuits, with caps to top it off.

The pair from Los Angeles have been coordinating their festival outfits for several years. Tuttle, 23, said that this year, they wanted to explore the fashion possibilities of bondage.

Hillary Osgood, 31, has been heading to festivals, especially Coachella, for 12 years. One thing she never forgets and has never lost -- her light purple umbrella that both shields her from the sun and highlights her signature style.

This year, she decked herself out in matching flowers draped like a turban on her head.

While the flowers are artificial, Osgood said she found inspiration as she lives in the flower district of Los Angeles and works at a tiki bar.

"It's a way to exemplify the Coachella lifestyle. It's not every day that you find a safe place to project some of your style," she said.

Aquiel Hayden has been on the festival circuit for the past two weeks and threw her clothes into a suitcase, choosing the day's wardrobe at the last minute.

The purple-haired 21-year-old sported a floor-length, sparkling red dress that she found in a vintage store in her home of Santa Barbara, California, paired with thick maroon sunglasses and a golden belt.

Hayden however said she was disappointed in the changing musical direction of ever-expanding Coachella and may not come back.

"I thought I should go all out for my last one. It's sort of like my graduation," she said.

Chanel Twyman and Auzunay Watkins were looking for something different for Coachella and found it -- short, and largely revealing, dresses made entirely from the tops of soft drink cans.

The pair from Philadelphia bought the unique outfits from the New York designer Gypsy Sport and matched them with equally shiny half-masks with rabbit ears.

Twyman, 23, said that she and Watkins, 25, considered themselves "very fashion-forward" -- and found the cans to be comfortable.

For Genevieve Paish of Christchurch, New Zealand, who is attending Coachella for the first time, the initial accessory was a pair of orange-red, heart-shaped sunglasses.

Paish, 21, said she picked the rest of her outfit to match, including her impromptu dress of drooping red strings.

She dyed her hair a similar color and used a key chain to make puffy red scrunchies with which to hold up her hair.