CULTURE From Russia with love

From Russia with love 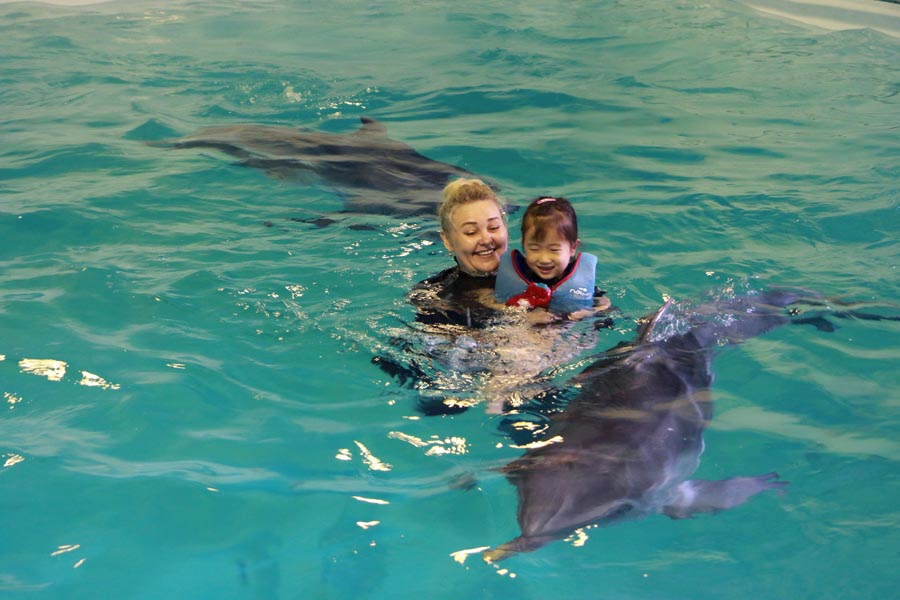 Xiao Yu is already quite the traveler, having been to Russia a couple of times, remarkable given that she is just 4 years old. However, Yu is no normal tourist, her visits to the Black Sea coastal resort of Sochi being about much more than rest and recreation.

Those visits are seen as vital to how her next few years unfold, for Yu is autistic, and in Sochi she has had encounters with a very special kind of specialist that is hoped will help her eventually lead something that more closely resembles a normal life.

That specialist - more exactly two of them - is a dolphin, contact with which is said to be beneficial to children like Yu.

Autism is a developmental disorder characterized by difficulties with social interaction and communication, and by restricted and repetitive behavior. In some severe cases autistic children may have trouble learning to speak or make eye contact. However, many children with autism and other autism spectrum disorders are able to live normal lives with the help of therapy.

Dealing with autistic children is of course challenging for anyone unfamiliar with the condition, not the least parents who in most cases only over many months or even several years become aware that something is not quite right with their child.

When it became clear that Yu was autistic her parents sought various treatments for their daughter, although autism is incurable. Treatments that are available aim to help those with the condition make the most of their lives, and it was in a joint therapy program for autistic children set up by China and Russia last year that Yu's mother felt she had finally found what she was looking for.

That program, in which Chinese children with autism visit Sochi to undergo dolphin-assisted therapy, is supported by the government of Sochi and the China Foundation for Disabled Persons. It was first held last October and again in mid-June to July.

During her latest stay at the Red Star Dolphinarium, Yu and nine other children underwent dolphin therapy once a day. In the treatment each child was accompanied by a dolphin trainer, a Russian therapist, a Chinese trainer, an interpreter and the two dolphins.

With the help of professional therapists, the children played games with the dolphins and underwent treatment such as acupoint pressure therapy and ultrasonic sound wave stimulation.

It is recommended that autistic children receive such therapy no more than twice every year, the trainer said.

"We don't want the children to have therapy too often because their bodies need time to take in what they have experienced."

Dolphin-assisted therapy is not without controversy, there being no scientific evidence of its benefits, even if it is argued that the communicative experience for the children can be of no harm, and animal welfare activists object to the way animals are forced into their role as therapists, first of all by being in captivity.

However, even if Yu's mother is aware of such objections, she talks enthusiastically of the progress she thinks Yu has made since first traveling to Sochi.

From Yu's first encounter with the dolphins she was surprised to see how her daughter enjoyed playing with them and was not only willing but keen to jump into the swimming pool to play with the dolphins.

This year Yu's performance during the therapy was much better, her mother said, and she even engaged reporters in dialogue.

Reporter: "How old are you?"

Reporter: "Is this the first time you've seen dolphins?"

Yu's mother says her daughter also made much progress after her first round of dolphin assisted therapy in Sochi last year.

Then Yu and seven other autistic children spent two weeks in Sochi with the support of the China Foundation for Disabled Persons and First Automobile Works Group Corp.

"She is now much more emotional," Yu's mother said. "She used to have no contact with anyone, and didn't care if you were happy or angry. She is performing better in kindergarten, too."

More than 10 children from China have now visited Sochi to undergo dolphin-assisted therapy and have had very positive results, says Anatoly Pakhomov, the mayor of Sochi.

"The dolphin therapy is a unique method that Russia has created for treating autism. I'm glad our Chinese partner chose our therapy and chose to come to Sochi."

During the period of the treatment this year, the Sochi government and the China Foundation for Disabled Persons met to discuss long-term collaboration with mutual training, about dolphin therapy techniques, academic exchanges by autism experts from China and Russia, and collaboration between the two on treatment and recovery of autistic children from both countries.

"We hope the Sochi government and China Foundation for Disabled Persons can establish a more stable long-term partnership, and we will continue to provide the necessary assistance and support," Pakhomov said.

Jia Meixiang, head physician of pediatrics at Peking University Sixth Hospital and an expert on autism who followed the team to Russia both last year and this year, said that going by observations and reports over the past six months, the children who took part in the dolphin-assisted therapy last year have had improvement in their condition.

"From what I have heard from all eight families who went to Russia last year, their children made progress in social communication. For example, previously some children not only did not like animals, but would not even look at animals in front of them. But after taking the dolphin therapy that has changed, and they are even interacting with pets. In addition, some children have transferred their attention from animals to people, starting to talk with their parents.

"Nevertheless, as a new treatment for autism dolphin-assisted therapy is not 100 percent sure to be affective for all autistic children. As experts continue to investigate the pathological causes of autism, what we can do is to use the therapy to create intervention training."

The China Foundation for Disabled Persons Autism Child Rehabilitation Center was opened in May last year in Haikou, Hainan province.

Jia said the new rehabilitation center will service more Chinese autistic children, and may signal the start of more collaboration between China and Russia in the field.

"Sochi's and Hainan's climates are similar. If we start doing dolphin assisted therapy in China, the new rehabilitation base will be able to service more families. After all, it's not cheap for families to travel to Russia for the treatment."

China and Russia have collaborated in psychological treatment before, notably 11 years ago.

Under an agreement in 2008 by Russia's President Dmitry Medvedev and the Chinese President Hu Jintao, 1,570 primary and high school students affected by the Wenchuan earthquake of May 8 that year were evacuated to the Russian Far Eastern port city of Vladivostok to recuperate.

Nearly 70,000 people died and about 18,000 were missing after the magnitude 8.0 earthquake devastated the county in Sichuan province.

One of those evacuated to Vladivostok was a severely traumatized He Yujiao, whose father died in the quake. Ten years later she would recall how when she arrived at the Ocean All-Russia Children's Care Center she was tired and devastated and that Russian teachers and students welcomed her and other survivors in Chinese and made them feel at home.

The staff prepared spicy noodles, food the children ate at home, to help them feel at ease. The location also helped. They awoke to the sound of ocean waves that had a soothing effect, and the children were encouraged to swim and to skate.

"Our plan was to help them leave behind the memories of the tragedy through psychological therapy," a teacher at the center said.

When it was time for the children to return to China, almost everyone had gained weight, and they hugged their teachers and friends and promised to return one day.

During a state visit to Russia in March 2013, President Xi Jinping recounted at the Moscow State Institute of International Relations the story of Russia's prompt assistance.

Last year Xi and his Russian counterpart, Vladimir Putin, visited the Ocean All-Russia Children's Care Center and met some of the children from Wenchuan who had been taken care of 10 years earlier.

In his address at the event, Xi said the two countries are good neighbors and partners and have helped each other in difficult times.

Collaboration between the two countries in child psychology therapy is just in its initial stages, Jia said.

"We expect to establish long-term collaboration and that more Chinese children will benefit from the exchanges between China and Russia."