CULTURE From Zen to zany, backyards with style and personality

From Zen to zany, backyards with style and personality 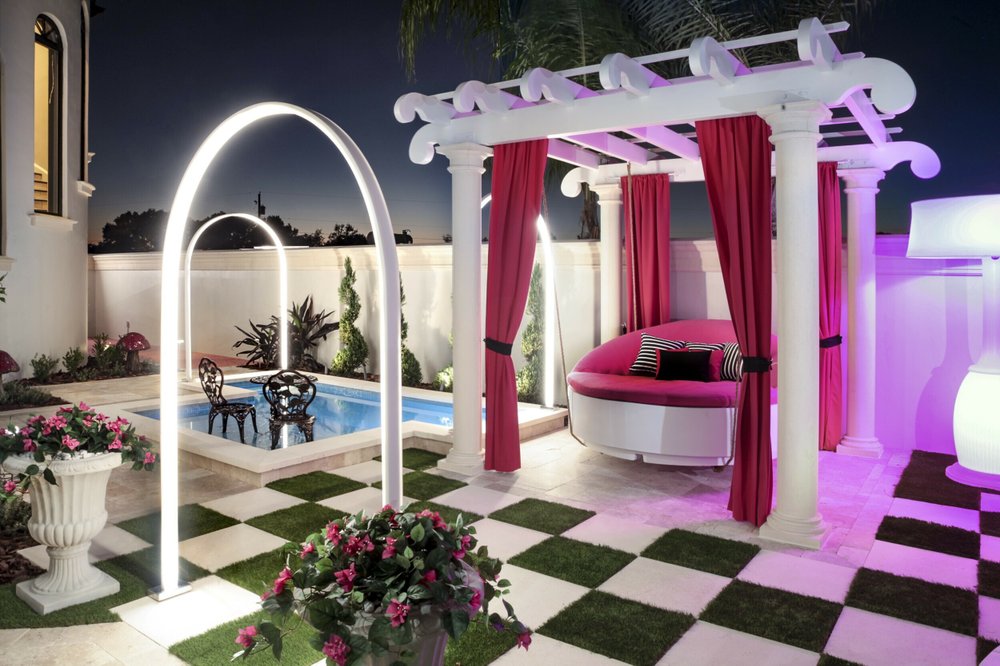 This 2019 photo provided by Ryan Hughes of Ryan Hughes Design Build shows an outdoor space at a home in Florida. (Photo: AP)

More and more, she says, homeowners are putting the same kind of personal stamp on their outdoor areas as they do to the inside of the house, where one trend has been to turn ordinary rooms into gyms, theaters, studios, wine cellars, libraries and more.

While there are many do-it-yourselfers happy to dig, hammer and build on their own out in the yard, a lucky few have the resources to turn to interior designers for a customized look.

One family in Tampa, Florida, commissioned local designer Ryan Hughes, known for creative outdoor designs, to come up with something playful to fill around 2,000 square feet of backyard.

First, he created a kids’ section: One of the little girl’s favorite books was “Alice in Wonderland,” so Hughes created a reflecting pool like the one Alice looks into, built with the safety features of a standard wading pool. A pergola holds a swinging bed with red curtains. The imaginative garden vibe also includes an oversize checkerboard for games, a curvy bench encircling a crape myrtle tree, and colorful, oversize mushroom sculptures and spiral topiaries. Hughes added LED-lit arches and life-size Lucite lamps, as well as accessory lighting shaped like lily pads and hearts.

For the rest of the backyard, where the adults congregate, Hughes took a different tack: “The homeowners envisioned an exciting outdoor space similar to what they’d experienced during visits to a famous resort,” he said. There’s a 200-foot-long, 6-foot-wide lazy river lined with pebble-finish glass tile and travertine edging. It winds around a sunken fire pit and multiple lounge areas, and under a wooden walking bridge. There are water curtains to splash in along the way.

Other outdoor options these days include the women’s version of the man cave: the “she shed.” The architectural style of a newly built shed might mimic that of the main house. But as with the man cave, the space is meant as a refuge from the household.

“It’s the space where the woman who nurtures everyone goes to nurture herself,” says New York designer Elaine Griffin, an early proponent of these specialized hideaways.

Erika Kotite, in her book “She Sheds: A Room of Your Own” (Cool Springs Press, 2017), included a Seattle modernist artist’s studio, a Balinese teahouse, and a writer’s cabin created from an old tool shed.

“One of the neatest things is that women tell me they finally had a home for ‘X’ — their photographs, a collection,” etc., Kotite says. Some like to create a space quite different in style from the main home, and more playful.

No matter whether your shed is 8 square feet or 20, pay attention to the foundation, she says, and having adequate light. While big-box DIY centers offer some great build-your-own shed kits, “some of (them) may not have the largest windows, so you have to customize,” Kotite says. And while building your own shed might seem daunting, stores like Lowe’s offer how-to videos online.

Griffin notes a trend toward refurbishing existing storage sheds or garages, instead of building new.

“Electrified, customized and dressed to the nines, they’re easier on the budget and clock than building from scratch,” she says.

If you’re close enough to a power source, a bar fridge and lighting is a nice addition. Otherwise, consider coolers, solar lamps and perhaps a fire pit or small camp stove.

Meditation lovers can create a Zen zone in even a small outdoor space. Wind chimes, a small tabletop fountain and some pots of fragrant blooms can make even an apartment balcony a mini retreat.

If you’ve got a bit more room, a wooden platform with pergola, sliding screens or tenting creates a cool, relaxing spot for yoga or contemplation. Set up a comfy bench, hammock or chair far from the noise of the household.