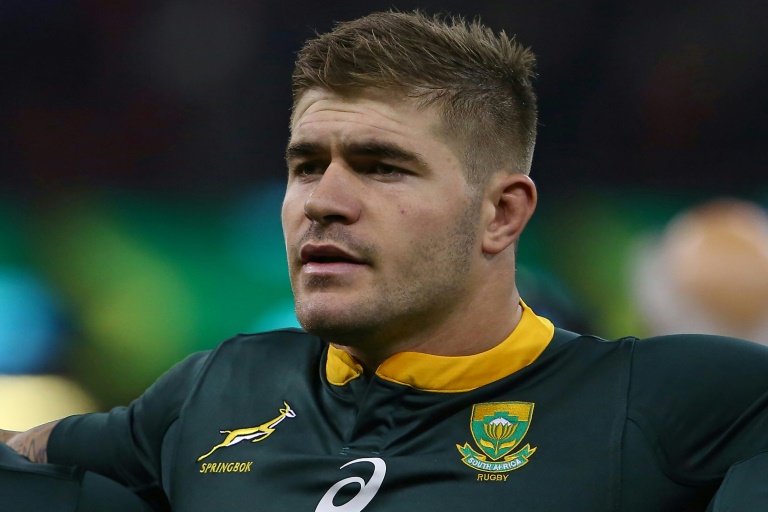 In or out? Golden Lions and South Africa hooker Malcolm Marx. (Photo: AFP)

Five talking points ahead of this week's games in Super Rugby:

After getting beaten up at scrum time for the past two weeks, the injury-hit Waikato Chiefs are rethinking the decision to have three-Test All Black Angus Ta'avao switch from tighthead to loosehead prop.

The Auckland Blues and Golden Lions were both able to bully the Chiefs front row, forcing Ta'avao to give his own take on how hard it is switching from the right side to the left.

"I've given away a few penalties, which is quite tough to deal with, but I'm just trying to do the best I can and whatever's asked of me," he said ahead of Saturday's derby with the Wellington Hurricanes.

"I think a lot of people don't really understand (the difference). Imagine going to the toilet and being right-handed, then you've got to use your left hand, so it's like little things like that."

Top Marx to no Marx

The Golden Lions' impressive win last week came after they duped the Waikato Chiefs into thinking Malcolm Marx was on the bench then thrusting the star hooker into the run on side.

"With Malcolm on the bench, the Chiefs opted to rest some of their heavy forwards. With him in the starting team we could take them on at scrum time and it worked well. The foundation for our victory was laid up front," club boss Rudolf Straeuli admitted afterwards.

But they can't pull the same trick on Friday when they face the table-topping Canterbury Crusaders in a repeat of last year's final.

Marx has been sidelined in line with South Africa's rest policy for Springboks. To even things up, the Crusaders are forced to rest two All Blacks in Scott Barrett and Matt Todd.

Wallabies flanker David Pocock's injury woes continue with the Brumbies star out of their clash against the Jaguares in Buenos Aires.

Pocock has played just three games this season and none since March 8 as he struggles to overcome a calf problem picked up at a January pre-season Wallabies camp.

He travelled to South Africa for the Brumbies' nail-biting 19-17 win against the Stormers last weekend, but has been sent home from the tour, according to rugby.com.au

Brumbies coach Dan McKellar acknowledged last week it had been a frustrating time for both the player and the club.

"It all started back in January at the Wallabies camp and hasn't stopped really," he said of Pocock.

"If I had have been told, when I was originally told it was a calf strain in January, that it would be still dragging on in the back end of April, you'd certainly be frustrated."

Veteran Josh Mann-Rea's rugby career could be over with the 38-year-old reportedly suffering an anterior cruciate ligament tear, which can need months of recovery.

The ACT Brumbies hooker left the field during their win against the Stormers last weekend and club chief executive Phil Thomson confirmed the seriousness of the injury to the Canberra Times.

Mann-Rea, the oldest player in Super Rugby, has been with the Brumbies since 2013 and made two late-career appearances for the Wallabies, earning his debut from the bench against South Africa in Perth in 2014.

Connal McInerney will link up with the squad in Argentina to face the Jaguares as Mann-Rea's replacement.

De Bruin left New Zealand before a surprise win over Waikato Chiefs without giving a reason, fuelling speculation of a rift between him and Lions officials over poor results this season.

Lions chief executive and former Springbok Rudolf Straeuli dismissed the rumours, saying "Swys is getting medical assistance and there is no rush to make a decision regarding his future".

Defence coach Joey Mongalo also returned home when a Sydney court found him guilty of indecent assault against a hotel employee after a match against the NSW Waratahs last season.

He will appeal the undisclosed sentence -- reportedly a fine and suspended community service -- and also faces a Lions disciplinary hearing.