Froome cracks in the Pyrenees as Thomas solidifies Tour lead 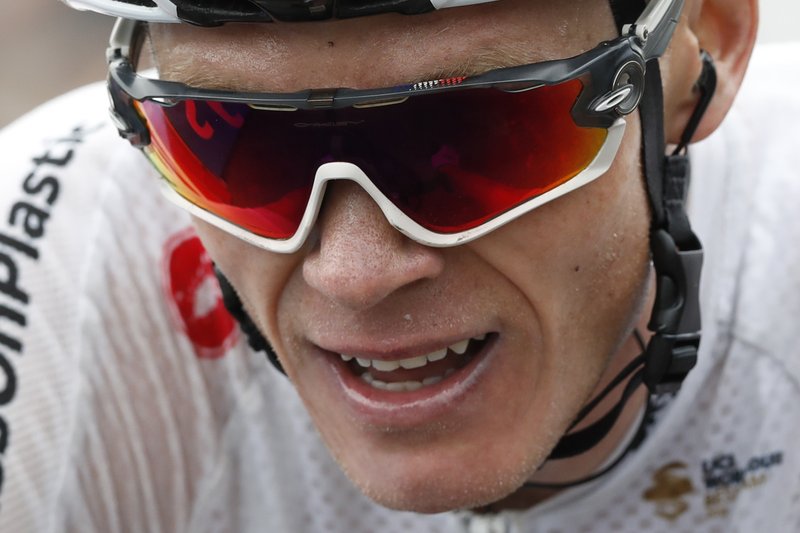 Four-time champion Chris Froome cracked in the feared 17th stage of the Tour de France through the Pyrenees on Wednesday, solidifying Sky teammate Geraint Thomas’ hold on the yellow jersey.

Quintana, a three-time podium finisher in the Tour, finished 28 seconds ahead of Irish rider Dan Martin, while Thomas crossed third, 47 seconds back.

Froome finished eighth, 1:35 behind, and dropped from second to third overall, a distant 2 minutes, 31 seconds behind Thomas.

“Froomey said on the radio @ maybe 5K or 4K to go that he wasn’t feeling super,” Thomas said. “That gave me confidence because I knew if Froomey suffered, everyone suffered.

“I didn’t want him to have a bad day like he did but it just gave me confidence knowing someone of Froomey’s stature was struggling, and I just knew I would be able to respond to the attacks.”

Tom Dumoulin moved up to second, 1:59 behind Thomas, the Welsh rider who is seeking his first Grand Tour victory.

“Thomas has been the strongest, and that’s the situation now,” Dumoulin said. “For me, so far it has not been possible to gain time on him.”

Froome is attempting to match the Tour record of five victories shared by Jacques Anquetil, Eddy Merckx, Bernard Hinault and Miguel Indurain. But he appeared to be close to conceding this title attempt.

“We just got to look after (Thomas) now,” Froome said. “I’ve won the last three Grand Tours and G’s ridden an absolutely faultless race this year, so he fully deserves to be in the yellow jersey, and fingers crossed he finishes it off and gets the job done in Paris.”

Froome was first put in difficulty when fourth-placed Primoz Roglic attacked with 2.5 kilometers to go, and then was dropped for good when Dumoulin accelerated at the 2K banner.

While Thomas followed Dumoulin, Froome quickly lost ground and had to be escorted up the rest of the way by Colombian teammate Egan Bernal, who kept turning around to check on his team leader.

Sticking his tongue out in apparent exhaustion, it was a strong signal that Froome has reached his limit after winning the last three Grand Tours — the Tour and Spanish Vuelta last year and the Giro d’Italia in May.

Froome also had to deal with the pressure of an asthma drug case over the last nine months. He was cleared of doping five days before the Tour.

It was Quintana’s second career stage victory in the Tour, having also won a leg in 2013. He moved up from eighth to fifth overall, 3:30 behind.

“I went through some difficult moments in the first part of this Tour and lost some time,” said Quintana, who is fifth overall. “But I still felt strong and had the energy to finish the race on a high. I usually improve in the third week of the Tour and it’s going that way.”

A Formula One-like grid start introduced to the Tour for the first time had little impact on the race as Thomas and Froome waited for their Sky teammates to join them.

The unprecedented finish on the Col du Portet above Saint-Lary-Soulan at an altitude of 2,215 meters (7,267 feet) marked the highest point of this year’s race.

With so much climbing to do right from the start, riders warmed up for up to an hour both on the road and on stationary rollers before the stage started.

Thomas started in “pole position” as the top 20 riders in the standings began ahead of lower-ranked riders in four more groups further behind.

The top riders had their numbers pasted on the road to indicate their grid positions.

Estonian rider Tanel Kangert launched an early solo breakaway and was first over the Montee de Peyragudes, the opening climb.

Peter Sagan, the three-time defending world champion and three-time stage winner in this year’s race, crashed on the descent from the Col de Val Louron, the second mountain of the day. Sagan made it to the finish with his jersey torn.

Tangert was alone in the lead until halfway up the Col du Portet, when Quintana caught him and surged ahead.

Quintana had followed along when Martin attacked from the yellow jersey group at the start of the climb.

There were no reported security issues a day after police used tear gas to disperse a farmers’ protest that had blocked the road with bales of hay.

After a less arduous Stage 18 on Thursday, there is another mountainous leg in the Pyrenees on Friday. Then there’s an individual time trial on Saturday before the three-week race ends Sunday in Paris.