Walt Disney Animation Studios' Frozen 2, the sequel to its 2013 animated blockbuster, has cast a spell on product categories like toys, apparels and makeup items, and has recreated the magic of Arendelle for Chinese retailers due to resurgent demand for movie merchandise products from young consumers. 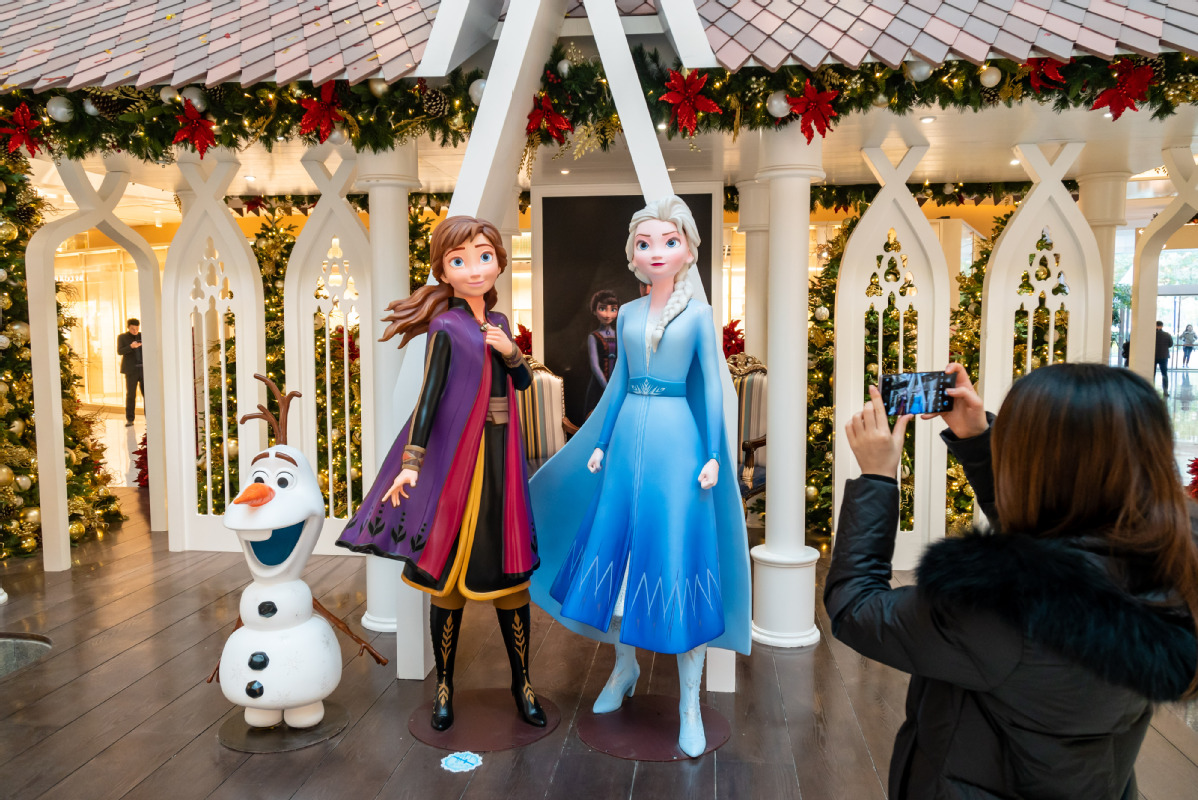 A visitor takes a snapshot at a Frozen 2-themed exhibition in a shop in downtown Shanghai. (Photo: China Daily)

Frozen 2, which hit Chinese theaters on Nov 22, has so far grossed more than 662 million yuan ($93.9 million) in box-office receipts in the country, with the number climbing steadily.

Disney's 2013 hit Frozen grossed $1.3 billion at the box office and more probably through its consumer product and licensing businesses.

According to Disney China, Frozen 2 merchandise was extremely popular at the Disney Store China in November. The dress worn by Elsa, the protagonist of the movie, was already among the top five selling items on the store weeks ahead of the movie's opening on Nov 22. Besides kids wear, fashion accessories such as the Frozen 2 brooch and the woolen scarf created by the China team were well received by young adult female consumers.

The excitement for Frozen 2 consumer products has also been intense in online platforms. During the 24-hour period on Nov 11, a shopping occasion created by Alibaba's Tmall platform, every second 59 Disney products were sold online including Disney's self-owned retailing platforms or franchised products. Many of them were Frozen-themed products.

Consumer products are part of the Walt Disney Company's businesses that bring stories and characters to life through physical products and digital experiences.

In October, McDonald's China said it has joined hands with Disney to launch themed Happy Meals based on Disney movies, with the first batch of free toys featuring Frozen 2. The toys include five beloved characters－Elsa, Anna, Kristoff, Olaf and Svan. Meanwhile it has also rolled out Frozen-themed parties for restaurant goers.

According to McDonald's, the collaboration with Disney is very successful given the popularity of the Frozen-themed toys among children since its release.

Miniso, a Guangzhou-based low-cost retailer that has 3,500 chain stores worldwide (2,500 in the country), has developed more than 70 kinds of products including skin care, make up, accessories and digital products in its Frozen 2 collection.

Most of these products are targeted at the generation Z consumers, particularly female consumers, with affordable prices.

Wang Guangyong, director of branding at Miniso, told China Daily that many of the products featuring the Frozen theme have sold out or are extremely popular items on social media.

Disney's well-known IP has played a big role in improving in-store traffic as well as in boosting sales, he said. They will continue to work with Disney on its other world famous IPs including Mickey Mouse, especially in the upcoming Lunar New Year.

Commenting on the number of new dresses Princess Elsa has changed in the new film, a top influencer Gogoboi wrote, jokingly, in an article, "Parents, prepare to tremble." But retailers are definitely not rushing into the unknown.