China's gaming industry resumed strong growth in the first half of 2019, despite headwinds, and is set to continue its steady run in the rest of the year, said industry experts. 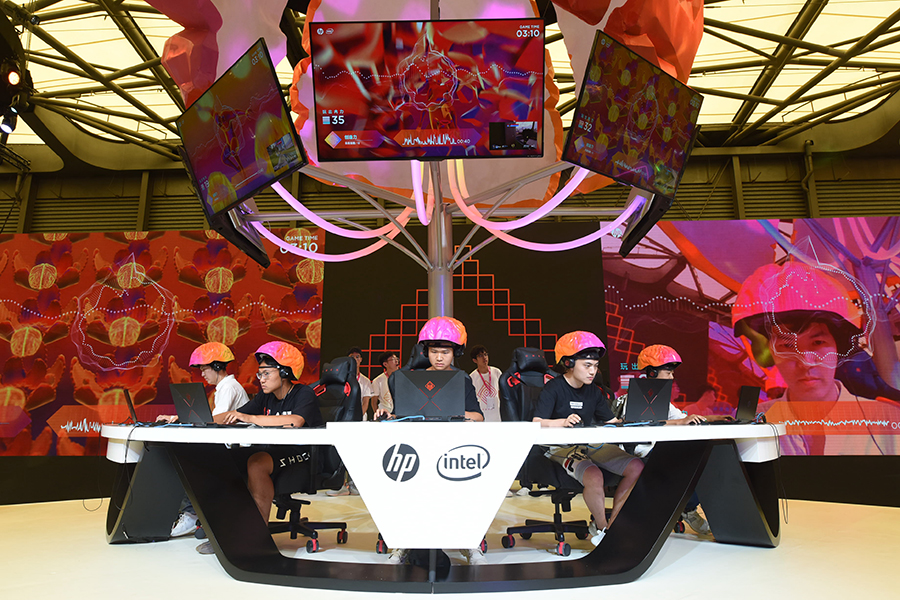 Visitors play a new game at an electronic games exhibition in Shanghai in August. (Photo: for China Daily by Long Wei)

The highly lucrative market generated revenue of 116.31 billion yuan ($16.9 billion) in the first half of this year, with a 10.8 percent year-on-year increase, according to a new report from Chinese gaming database Gamma Data Corp.

Mobile gaming remained the largest segment in the first half of this year, producing revenue of more than 70 billion yuan, which comprised over 60 percent of the Chinese game market.

Notably, growth in mobile game revenue surged 18.8 percent year-on-year in the first half, compared to the 12.9 percent increase in the same period last year.

"The growth in the total number of players has mainly been boosted by the continuous increase of netizens and the growing need to convert short videos and other internet businesses into cash," Teng added.

Last year, China's game market suffered its slowest revenue growth in a decade, as local gaming regulators tightened their grip on a market that experts think is reaching saturation point.

According to the report, the overseas market has become a key source of income for Chinese gaming companies. In the first six months, Chinese developers earned $5.73 billion from their self-designed online games in overseas markets, up 23.8 percent year-on-year.

"The strict regulation of the games industry will drive change, forcing gaming companies to find new ways to offer high-quality products. With the gradual lifting of the restrictions on the number of game titles and further expansion overseas, the game market will see a bright future in the rest of this year," Teng added.

"During the past year, local game firms have found ways to survive in the rough time," Liu said. "The main solution is to expand overseas. After the nine-month licensing freeze, they will continue to spread across the globe, and more companies will target overseas markets. And that will be a driving force for the growth of the entire industry."

According to Liu, after experiencing the long-term licensing freeze, local game companies will pay more attention to their products and cherish each game title they have, which will have positive effects on the industry.

"Currently, gaming companies are adapting to the new policies. We estimate the gaming industry will continue to grow steadily over the rest of the year, and is set to see a significant jump in the next two years," Liu added.

"As the purchasing power of tech-savvy younger generations grows, especially those born in the 2000s, they will gradually become the main force of game consumption," said Xiao Hong, CEO of Perfect World Co Ltd, a Chinese movie and gaming company. "The younger generation are not like their parents, and demand a different kind of entertainment content or form."

"The key is to better cater to the younger generation, offer high-quality products and continue to go global," Xiao added.

For instance, the company's French team Magic Design Studio has developed a 2-D action-adventure game called Unruly Heroes. Based on the story of China's classic fantasy novel Journey to the West, the game was nominated for Best PC Game and Best Visual Art at the Ping Awards 2018.

The Beijing-based company reported in April its revenues for 2018 rose 1.31 percent to more than 8 billion yuan, of which 5.42 billion yuan was from the gaming sector. And the company's overseas revenues reached 1.48 billion yuan in 2018, up by 20.09 percent year-on-year.

"Gaming is developing diversity, maturity and innovation. And the blossoming new technologies will also boost the gaming industry's development," Xiao said. "With a raft of popular entertainment apps dominating netizen's smartphone screens, there is less time for gaming apps."

"As people have limited time for entertainment, new formats will inevitably have an effect on the existing ones," Zhang said. "The booming pan-entertainment sector may affect the gaming sector. Thus gaming firms need to gear up to invest more resources and offer innovative high-quality products that meet gamers' changing demand."