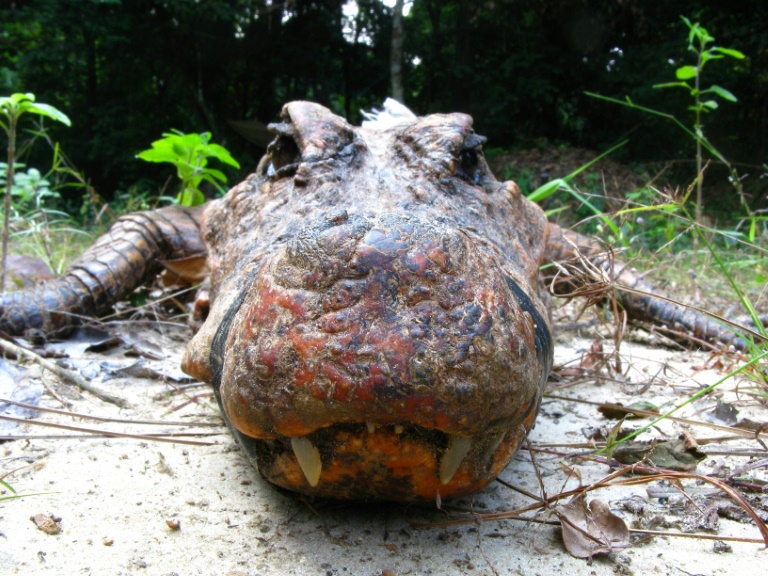 The West African state of Gabon is famous for its biodiversity but in a galaxy of spectacular finds, one stands out: orange crocodiles.

Scientists looking for traces of ancient human life stumbled upon the unusual reptiles decade ago as they searched in the gloom of isolated caves in Gabon's southern Omboue region.

"When I approached with the torch in the cave, I saw red eyes... crocodiles!", said geo-archaeologist Richard Oslisly. It was only two years later when they hauled one out into the light that they realised it was orange.

"At first we thought the colour came from their food, because we saw that these reptiles ate orange bats," said Oslisly.

The scientists discarded other theories before speculating that lack of light in the Abanda caves may have caused depigmentation and urea in bat droppings may then have induced an orange hue.

Under this theory, "the bat guano began to attack their skin and transformed their colour," said speleologist Olivier Testa, a member of the research team.

Dwarf crocodiles (Osteolaemus tetraspis) are a well-studied species, but the ones in the cave complex stand out in the way they have adapted to their habitat.

Oslisly, Testa and an American researcher, Matthew Shirley, have carried out multiple expeditions to study the unusual animals, which can grow to 1.7 metres (five and a half feet).

"We think these... crocodiles have been in the Abanda caves for around 3,000 years, which correlates fairly well with a time when the sea level fell and this coastal zone became terrestrial once again," Shirley said.

Mapping the cave complex, the scientists found four orange specimens in a community of 40.

The crocodiles of "normal" colour, they discovered, live in grottos which are connected to the surface.

But the orange-coloured ones live in caverns that are accessible today only from vertical shafts.

However, the cave system also has smaller horizontal connections, which are filled with water or dry according to the level the ground water.

One possibility is that the orange crocodiles entered their present habitat through narrow openings which they then outgrew and could not return, and their skin eventually changed colour in response to the bat guano.

In the total darkness, the animals survive on a diet of bats and crickets, unlike above-ground crocodiles of the same species which feed on fish and crustaceans.

A comparison of cave-dwelling and above-ground crocodiles confirms that they have not become separate species.

However, the subterranean creatures -- whether orange or normal colour -- have developed a specific "genetic signature," apparently from adapting to life underground, and this is transmitted from generation to generation, said Shirley.

The crocodile is already a protected species in Gabon, known for its geological and biological diversity, but Oslisly wants the Abanda site to become a "wholly protected sanctuary".

"There's much more to learn in the Abanda caves," he said, pledging to develop the site for "scientific tourism".