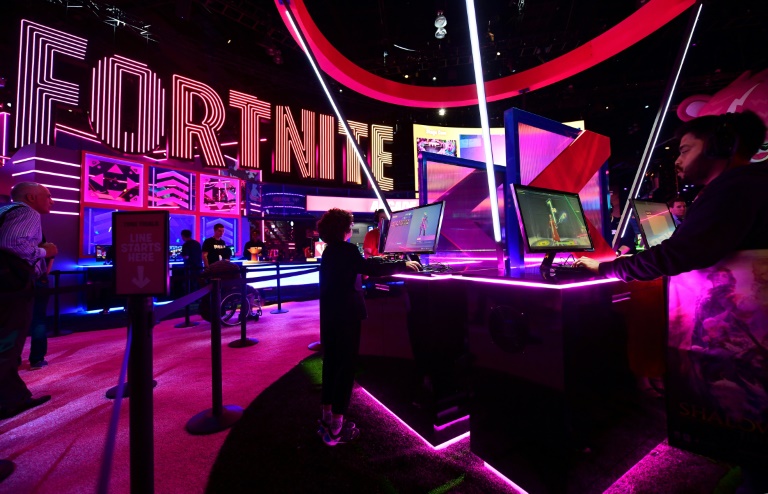 Fortnite, which is free to play, has 250 million users worldwide. (Photo: AFP)

Two hundred gamers will battle it out for a top prize of $3 million this weekend in New York at the first Fortnite World Cup, the richest tournament yet in the burgeoning eSports market.

The best players from around the globe, mostly teenage boys, are gathering in the Big Apple to determine who is top dog at the shoot-'em-up survival game, which has become an international phenomenon since launching in 2017.

Every competitor is guaranteed to leave Arthur Ashe Stadium -- more used to hosting US Open tennis -- with $50,000, making them the envy of the school classroom when they return home. Saturday and Sunday's finals have a total prize fund of $30 million.

"There's a lot of money to be made (compared to other games) and it's open to everyone," 15-year-old Evan Depauw from Belgium told AFP.

"Often, in games, there are really very few players who can make a lot of money and be really well known," added Depauw, who plays the video game for up to four hours a day.

Epic Games -- Fortnite's creators -- have spent a whopping $100 million on the inaugural event, including staging 10 weeks of qualifying culminating in this weekend's tournament.

The winner will bank almost as much as the $3.85 million that the singles champions of this year's US Open will pick up, highlighting the growth of professional gaming. They will also get a shiny trophy.

Competitors will play the "Battle Royale" format of Fortnite, where they will fight each other in different worlds until there is just one survivor left standing.

Users are dropped onto an island where they must search for weapons and other resources while eliminating other players -- all while trying to stay alive. There is two divisions -- solo and duo.

Fortnite, which is free to play, has 250 million users worldwide and thousands of keen gamers are expected to pack into the stands to watch the participants tap away frantically on their controllers and keyboards.

The showpiece is an attempt by Fortnite to grab a greater share of the global gaming market, which is expected to be a $300 billion industry by 2025, according to a recent report by analytics firm GlobalData.

"These high-value tournaments are trying to drive engagement and interest in the game," said Michael Pachter, a gaming and media analyst at Wedbush Securities.

"They'll return a big chunk of their profit to gamers and keep people watching and caring about the outcome," he told AFP.

Fortnite generated revenues up to $300 million in some months of last year, dropping off to around $200 million a month currently, according to Pachter.

"There's half a billion people playing mobile games and another billion that play PC or console games that haven't tried Fortnite yet," he said.

"So there's plenty of room for them to replace the players that quit and keep their revenue at a steady level," Pachter added.

Fortnite has been instrumental in transforming the video gaming industry as users move from consoles and desktops to playing on smartphones.

The game has also pioneered the "freemium" model, meaning it costs nothing to play -- but users can purchase cosmetic upgrades that don't improve their ability to defeat opponents.

The finals are set to be wide open after Fortnite superstar Ninja, who has 22 million followers on YouTube, failed to qualify.

American Turner Tenney, known as "Tfue", is seen as one of the favorites to lift the solo trophy on Sunday.

Austrians Klaus Konstanzer, aka "Stompy", and Thomas Horak, nicknamed "Tschinken", are tipped to go far in the duo competition on Saturday.

Whether Depauw, the 15-year-old from Belgium who is also known as "DRG," picks up a check or not, he has no plans to ditch school for a life as a professional gamer.

"If I do not have the level (of ability) anymore or I just get tired of it, at least I'll have my studies," he told AFP.