CULTURE Gauff, 15, to take on defending champ Osaka next at US Open

Gauff, 15, to take on defending champ Osaka next at US Open 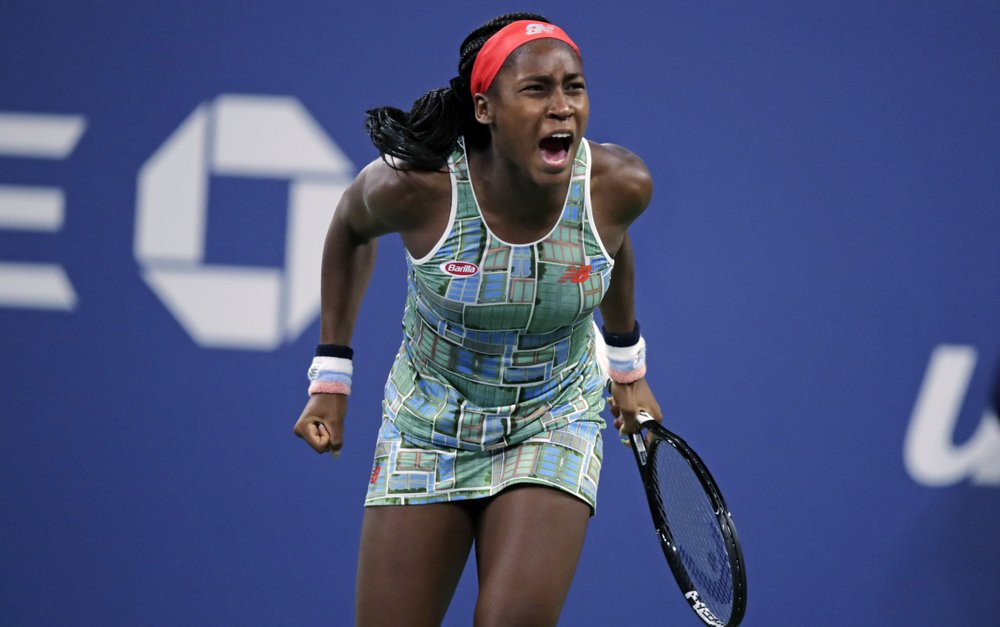 Coco Gauff. of the United States, celebrates after defeating Timea Babos, of Hungary, during the second round of the US Open tennis tournament in New York, Thursday, Aug. 29, 2019. (Photo: AP)

Coco Gauff is still not quite used to hearing her name shouted by thousands of US Open spectators reveling in each booming serve, each “How did she do that?” shot and each victory by a 15-year-old American who is the youngest woman in the US Open’s third round since 1996.

Imagine what things might be like for what comes next: a showdown against No. 1 seed and defending champion Naomi Osaka on Saturday.

Proving her captivating run to Week 2 at Wimbledon was no fluke, Gauff improved to 5-1 in her nascent, two-tournament Grand Slam career by edging Timea Babos of Hungary 6-2, 4-6, 6-4 at a rollicking Louis Armstrong Stadium on Thursday night.

“This is just the beginning, I promise,” Gauff told the appreciative crowd that serenaded her with “Let’s go, Coco!” at the final changeover.

“I was thinking, like, maybe they feel like I’m Golden State in Game 7 or something. It’s different, because you’re an individual player, so it’s weird, I guess. Most of the time you hear the chants, it’s for a whole team, not just for, like, me,” she said. “So it was pretty cool.”

Not since Anna Kournikova did it 23 years ago had someone who was 15 made it this far at Flushing Meadows.

Gauff covered the court so well, tracking down shot after shot from Babos, running so fast and so fearlessly that she ended up face-down on court after falling.

She pounded serves at up to 118 mph, recording nine aces, and mixed in drop shots, passing winners and all manner of other magic to great effect.

“A 15-year-old girl with power on the serve like this — I wish I had that when I was younger,” said Babos, a 26-year-old ranked 112th in singles and seeded No. 1 in doubles in New York. “If she continues like this, it’s definitely a very bright future.”

Another young American woman made some noise, too: Taylor Townsend, 23, whose pure, raw emotion came through after she delivered one last crisp forehand volley to complete her 2-6, 6-3, 7-6 (4) upset of two-time major champion Simona Halep.

Townsend, a qualifier ranked 116th, clenched her fists, raised her arms and yelled, “Yes! Yes!” before patting her heart. Moments later, Townsend’s voice cracked and tears began to flow as she told fans in Arthur Ashe Stadium, “It’s been a long journey. Just haven’t been able to get over the hump.”

Townsend pulled off the biggest victory of her up-and-down career with an entertaining, net-rushing, serve-and-volleying brand of lefty tennis against former No. 1 Halep.

“It’s been a long road. A lot of haters. A lot of people who weren’t sure. I mean, I’ve heard it for a really long time that I was never going to make it, that I wasn’t going to be able to break through or do this or do that,” Townsend said. “This was a huge, monumental moment. It was a very defining moment for me to realize that I belong here.”

She was marked for greatness long ago.

Townsend won singles and doubles junior titles at the 2012 Australian Open, turned pro that year at age 16, then cracked the top 100 in the rankings while still a teen. But a drop out of the WTA’s top 300 followed and she came into Thursday 9-16 at Grand Slam tournaments and 0-10 against top-10 women.

Against Wimbledon champion Halep, she wasted a pair of match points, one via double-fault, while serving for the win at 5-4 in the third, but never wavered. Townsend then saved a match point for Halep at 6-5.

“When I’ve played her before, I was just trying to make balls (in). I think I played not to lose,” said Townsend, who’d been 0-3 against Halep and sought her advice after a loss to her at the Miami Open earlier this season. “And today I played to win.”

How did she do it?

By moving forward at every opportunity, something rarely seen these days on tour. She won the point on 64 of her 106 trips to the net; Halep went 6 for 10. Townsend serve-and-volleyed 61 times, Halep once.

“Never played with someone coming so often to the net,” Halep said. “Didn’t miss much. It’s unbelievable.”

Gauff and Townsend provided the most attention-grabbing results on a busy Day 4 at the year’s last major tournament. Osaka, who has practiced with Gauff but never faced her, moved on with a 6-2, 6-4 win over Magda Linette.

Three-time US Open champion Rafael Nadal reached the third round when his opponent, Thanasi Kokkinakis, withdrew with an injured right shoulder.

Townsend now will try to get to the fourth round at a Slam for the first time. For all of the discussions about how US women’s tennis will do once the Williams sisters move on, the group looks to be in pretty good shape at the moment.

“Honestly, that conversation doesn’t really matter to me. ... Any time that someone has one good result or two good results, they’re ‘The Next.’ You know what I mean?” Townsend said. “It was, like, maybe I was, maybe I wasn’t. I don’t know. But it doesn’t matter, because I’m here now.”

Gauff’s doubles partner, 17-year-old Caty McNally, pushed Serena Williams to three sets Wednesday. Sofia Kenin, 20, beat Williams at the French Open and is into the third round in New York. At Roland Garros, Amanda Anisimova, 17, became the first player born in the 2000s to reach a Grand Slam semifinal. And then there are 2017 US Open champion Sloane Stephens, 26, and runner-up Madison Keys, 24.

“I give all the credit to the players, because it’s a healthy competition,” said US Fed Cup captain and head of women’s tennis Kathy Rinaldi. “They’re all pushing each other on and off the court. And so it’s really fun to watch. But in the meantime, I think they’re very supportive of one another as well.”