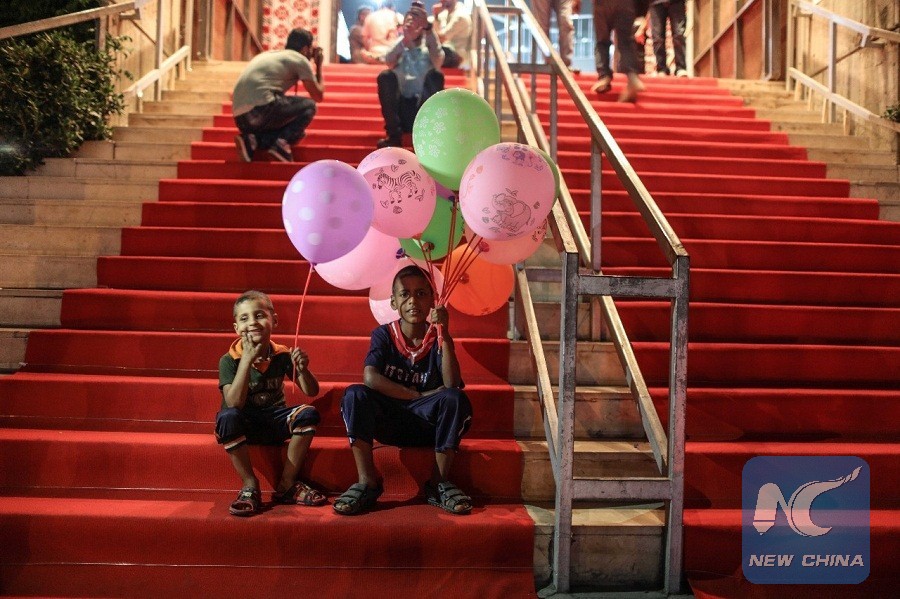 GAZA, Nov. 26 (Xinhua) -- Human rights films, produced by Palestinian, Arab and international cinema directors, will be screened for three days during the Red Carpet Festival for Human Rights Films which kicked off in Gaza City on Monday.

A huge red banner was placed on the top of the entrance gate of the theater in the building of the Red Crescent Society.

Montaser al-Sabe'a, executive director of the festival, said that dozens of films from Palestine, Arab countries and the rest of the world applied to join the festival, adding that 50 films have been chosen to be screened during the festival.

"The title of this year's festival is 'Bekaffi' which means enough, enough for the continuation of the status of internal division that violated the Palestinian's dignity and the future of his children," said al-Sabe'a, adding that "through the cinema, we want to tell the world that we want to live a normal life like others."

The audience, who walked on the red carpet and took their seats in the theater at the Red Crescent Society, expressed happiness for having the festival in the Gaza Strip.

"Between Two Crossing Points", the first film screened on Monday, expressed the suffering of people in the Gaza Strip at the crossing points on the border either with Israel or with Egypt, said Abdul Rahman Husein, director of the film festival.

The director of the film, Yasser Murtaja, who is also a cameraman and a filmmaker, had been shot dead by the Israeli army gunfire in eastern Gaza, as he was covering the anti-Israel marches that started in the eastern Gaza Strip close to the border with Israel on March 30.

Husein said that "last year's message of the festival was to tell the world that Gaza Strip populations don't like to die. They love life in spite of the mass destruction caused by the Israeli wars. They can find a space to enjoy watching films."

The festival films also include documentaries and animations. The films will be screened in dozens of schools and cultural centers all over the Gaza Strip.

Samah Ibrahim, a 37-year-old Palestinian mother of four children from Gaza, said she came to the festival with her children because she has never been to a cinema before and wanted to join this annual event.

"This event is different for me. It helps people get out of the horrible and miserable situation that the people here in Gaza are passing through," she said, adding "I like this festival and the movies to be on large screens are great ones."

Thirty years ago, there were 10 theaters in the Gaza Strip, but since the beginning of the first Palestinian Intifada or uprising against Israel, which broke out in 1987, the theaters were closed. However, some movie directors are now trying to revive the notion of cinema in Gaza.

"I believe it is the right of the Gaza Strip people to breath, to feel free and to see an end to the current internal Palestinian division that damaged all aspects of life," said Sa'ed Sweirki, one of the festival's organizers, adding "our message is so clear that Gaza has the ability to live in peace far from wars and misery."