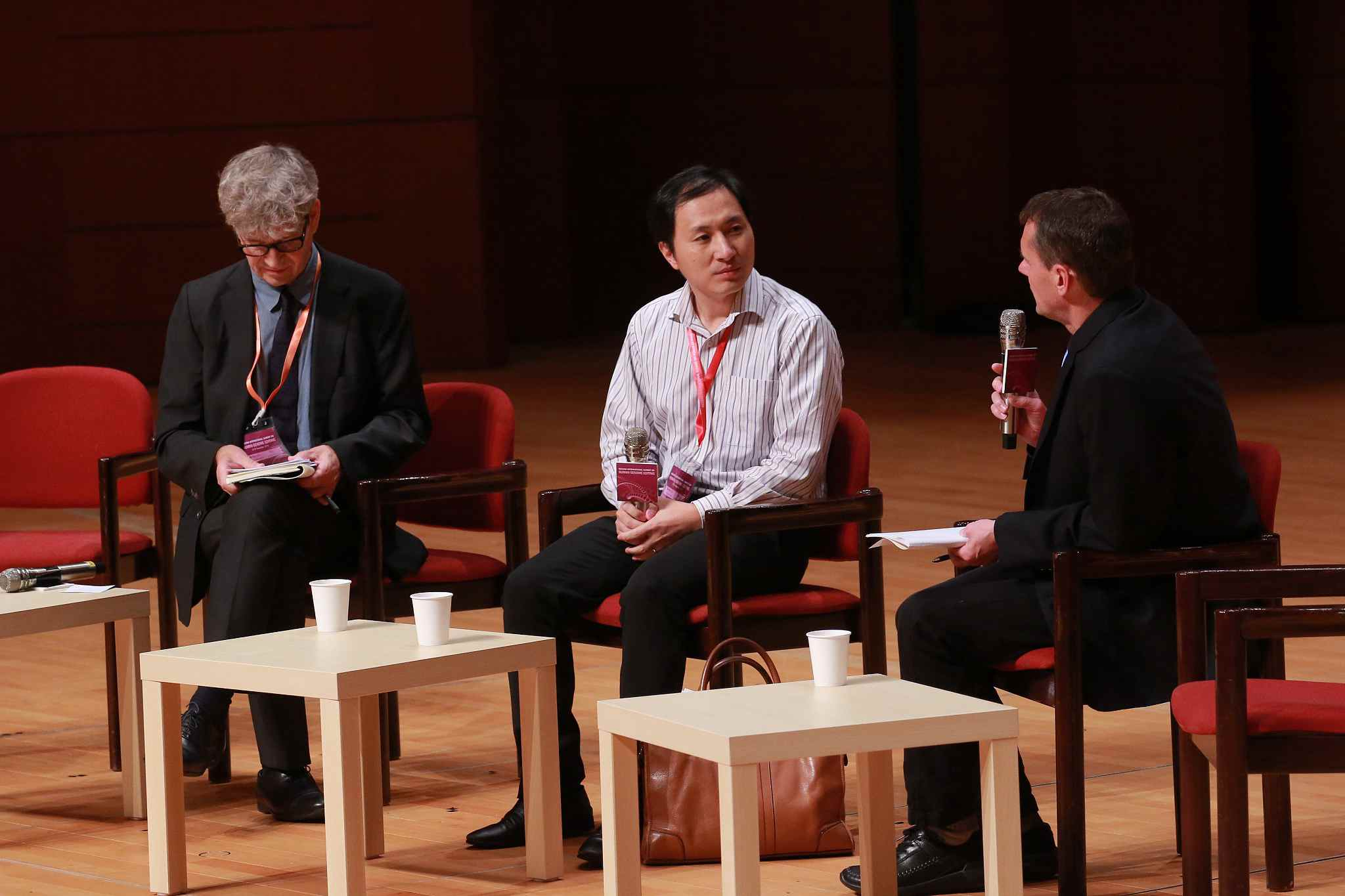 He Jiankui (C) receiving questions from the hosts and audience at the Second International Summit on Human Genome Editing at the University of Hong Kong. (Photo: VCG)

Geneticist He Jiankui, who says he has altered the genes of twin girls born this month, has spoken out about the details of his controversial medical procedure at the Second International Summit on Human Genome Editing at the University of Hong Kong on Wednesday.

He started his speech by apologizing for the "leak" of his work before the conference, and said the Southern University of Science and Technology in Shenzhen, where he works, was unaware of the trial he conducted.

In gene editing, any off-target effects would pose very serious consequences, and extend through the whole body, the researcher admitted, adding that his team carried out embryo off-target detection assessment prior to the trial taking into consideration potential off-target sites mentioned in previous studies.

"We identified one potential off-target in the intragenic region, although we could not identify if it is hereditary or related to editing," noted He.

The volunteering couple was briefed about the potential off-target site and chose to start a two-embryo pregnancy.

He said the husband is HIV positive, while the spouse is HIV negative. The twin baby girls, born a few weeks ago, are said to be resistant to HIV infection thanks to their edited genes.

No off-target site was observed genome-wide after birth testing, the researcher assured.

"We plan to monitor the twin babies for the next 18 years until they are adult and give their consent for further monitoring," said He.

The researcher also said another potential pregnancy with gene-edited embryos is currently underway.

"If we have the technology, we can make it available earlier," He said. "That will help much more people."

He said he deemed his research "transparent, open" and "shared what knowledge I accumulate to the world and society."

"It's the society that decides what to do in the future, " He said when asked about his responsibilities towards the future.

Talking about the dilemma of protecting the privacy of the patients and addressing the public's concern towards the babies, He said it's against the Chinese law to disclose the identity of HIV-positive people to the public, but for this specific couple who are under careful monitoring of health, "I think I will propose that the data or information should be open (to experts)."

He also described the process of convincing the parents, a question that draws much attention.

As these volunteers all have a good educational background -- they know about HIV, the drug, alternative approaches, and even the latest published research, said the researcher. When the volunteers came to the informed consent, they already understood "quite well" the genetic technology, the side effects or potential benefit.

"I think it's a mutual exchange of information that let the volunteer make the decision."

The informed consent is already on the website and can be found by searching his name, according to He.

For achieving it, he said that he had a conversation that "lasted one hour and 10 minutes."

"It happened in a conference room with couples and two observers besides himself. The printed copies were given to the couple before the informed consent."

"They are well educated," said He, adding that he explained from page one to page 20 line by line to the volunteers and they have the right to ask any questions, and make the decision on-site or later.

Two rounds were carried out for the informed consent, separately by his team member, an informal talk lasting two hours, and a formal one by himself.

When asked about the source of the funding, he stated that the pre-research was supported by the university where he worked as a professor, and when the experiment moved to clinical trials, He covered all the expenses.

It is said He has several companies, but he claimed that neither of his companies was involved in this study.

The families who participated in the experiment are not required to pay medical expenses, or receive much extra money from it, He stated.

He also denied that he performed the research in secret. "I have been involved in the scientific community," and consulted institutes and experts to get feedback from them. "When I moved on to clinical trials, I also consulted with several experts in the United States about ethics and also science."

The discussion ended with the final question that whether he would try it if it's his own baby.

"If I have the same situation, I would try it first."