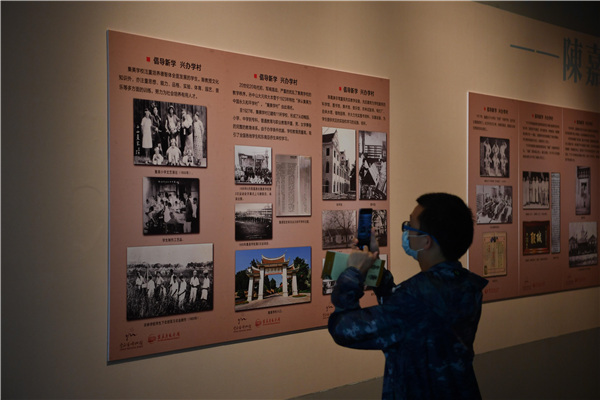 A visitor takes photos at an exhibition about the life of Tan in Yunnan Provincial Museum in July. (Photo: China News Service)

After Japan launched its invasion of China in 1937, business pioneer and philanthropist Tan Kah-kee delivered passionate speeches to rally overseas Chinese scattered across Southeast Asian countries for funds and manpower to "help the motherland in her hour of need".

"Deep down, he was a patriot. He felt very strongly about supporting not just the motherland, but the entire Chinese race with its 5,000-year-old history ... His appeal was emotional, straight from the heart," recounts Tan's granddaughter, Peggy Tan, from her home in eastern Singapore.

For Tan, it was very important that the Chinese civilization was not endangered by foreign invaders. "It was a do-or-die situation," his granddaughter says.

Although Tan's descendants are now living in different parts of the world, Peggy Tan believes that her grandfather had always hoped to go back to China in his old age, after a lifetime of toil.

Tan settled down in China after the founding of the People's Republic of China and was buried in his southeastern hometown of Xiamen, Fujian province, following his death in 1961.

From as early as 1917, Tan led fundraising efforts for the Tianjin Flood Relief Fund, set up by the Singapore Chinese Chamber of Commerce and Industry, an extensive campaign involving various sectors of the Chinese community in the city state.

He was well-known for heading the Singapore China Relief Fund and raising money to support the Chinese against the Japanese invasion. He mobilize over 3,000 local drivers and technicians in Singapore to help transport war supplies to China.

He also led an overseas Chinese group to China to convey their condolences to war-ravaged China, during which time he met with then Chinese Communist Party leader Mao Zedong, who later appraised him as the Banner of Overseas Chinese and the Glory of the Nation.

After Singapore fell into Japan's hands on Feb 15, 1942, Tan became a prime target during the Japanese occupation because of his social status and involvement in opposing the Japanese.

Peggy Tan says her grandfather likely penned the memoir in a bid to document both the thinking of Chinese politicians at that time and his personal observations, as he felt that these records would prove useful to future generations.

Apart from his political activities, Tan was also a savvy businessman, expanding his commercial empire to include rice mills, rubber production, shipping and brickworks, among other ventures.

Despite the wealth he accumulated, Tan was a frugal person, recalls Peggy Tan. He preferred simple meals, used simple appliances and seldom entertained friends with lavish meals at home.

Peggy Tan also recounts how her grandmother was not given any money to buy food during a period of financial difficulty for her grandfather. "As children, we heard stories of how she had to go to Tan Kah-kee's warehouse to beg for rice from the foreman!" says Peggy.

However, Tan was always generous to others, even during hard times. 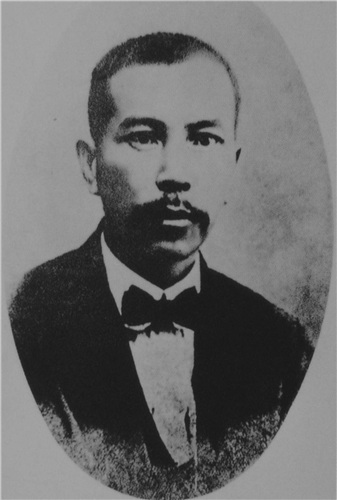 "To Tan Kah-kee, money should be treated like fertilizer, spread around as much as possible for best effect," Peggy Tan says. "In short, that wealth should not be hoarded, but used extensively for the betterment of society," she adds.

Peggy Tan recalls, "A few years ago, some students of Pioneer Junior College in Singapore were sent on a trip to Ji Mei where they learnt about Tan Kah-kee's history. When they came back, they said they were so shocked that he didn't leave a single cent to his grandchildren!"

A humanitarian at heart, Tan channelled his wealth into philanthropic pursuits such as education. He wanted to lift large numbers of people out of poverty and offer them hope for a brighter future.

Back in the 20th century in Ji Mei, education was seen as a pastime of the elite, and was thought to be useless by the working class, who wanted their children to help with farming and fishing.

Determined to help poor children realize their potential, Tan set up schools in China, such as the Ji Mei School in his hometown, which officially opened in 1913.

In 1919, he founded The Chinese High School (now known as Hwa Chong Institution) in Singapore, the first Chinese institution of higher learning at that time in Southeast Asia, catering to Chinese dialect groups among the overseas Chinese.

These schools put emphasis on teaching deep-seated morals, such as the concept of frugality, patriotism, respect for teachers and elders, honesty and integrity.

Tan's descendants are proud of how he mobilized 3,200 volunteer drivers and mechanics from Singapore, Malaysia and Myanmar to transport military supplies to China during war.

Today, descendants of those mechanics continue to meet with Tan's descendants in Ji Mei for important anniversaries.

Peggy Tan also brought 60 descendants of Tan on a two-week tour in October 2018 to retrace the routes the mechanics had traveled between 1939 and 1942. During the trip, she told stories about Tan to the younger generation.

After the outbreak of COVID-19, they received boxes of masks from the Chinese to help Tan's family members through the crisis, she adds.

On what Tan would have thought of the COVID-19 situation if he were alive today, Peggy Tan says he would have "certainly organized mercy missions to help".

"He would be even more surprised to find out that after two to three months, the whole situation has reversed (in China) and it was China that is rushing to help much of the world, with medical supplies and various aids," she says.

Despite many of Tan's descendants living in different countries all over the world, she says they continue to carry a deep connection with Singapore and China.

"They continue to feel this powerful call to return to discover their roots," Peggy Tan says.