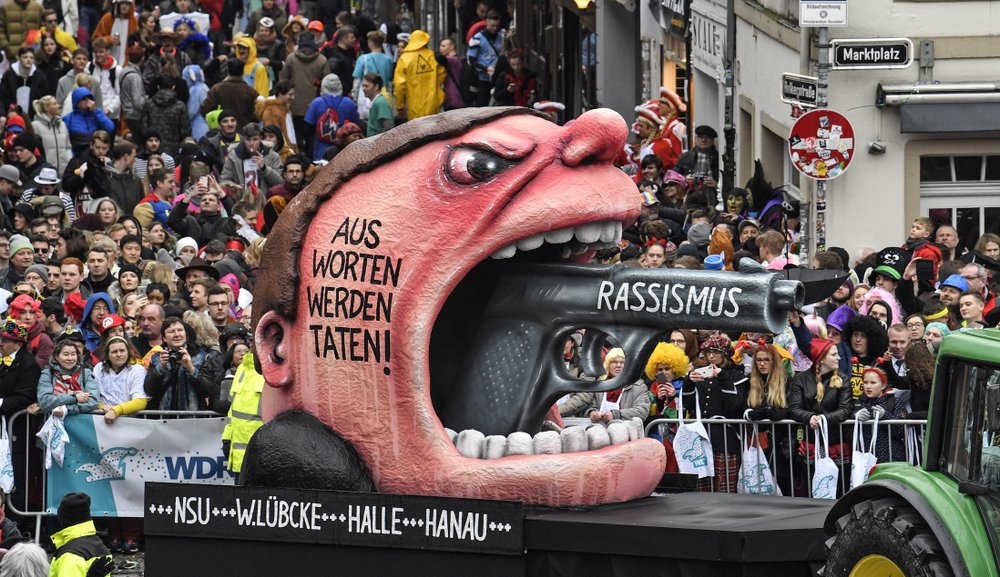 A carnival float depicts a racist with a gun in his mouth, reading "from words to action" during the traditional carnival parade in Duesseldorf, Germany, on Monday, Feb. 24, 2020. (Photo: AP)

Biting commentary on racism in Germany featured prominently Monday among Carnival floats in western cities, hastily put together in the aftermath of a deadly far-right attack last week near Frankfurt.

The floats for parades in Cologne, Duesseldorf, Mainz and elsewhere are notorious for their no-holds-barred satire, and also took aim at Brexit, the potential candidates to take over leadership of Chancellor Angela Merkel’s CDU party, and US President Donald Trump. One even featured a clown-like figure labeled “Carnival-Virus” thumbing its nose at an evil looking “Corona-Virus” creature.

Last Wednesday, a 43-year-old German man who had posted a racist screed online advocating genocide gunned down nine people of a foreign background in the Frankfurt suburb of Hanau, before apparently killing himself and his mother.

It was the latest in a string of far-right attacks in Germany and many have pointed the finger at the Alternative for Germany party, suggesting its nationalist anti-migrant rhetoric has helped create the climate for violence.

One Duesseldorf float depicted a red-faced man yelling in rage, a pistol protruding from his mouth with the word “racism” on the barrel. On the side was the slogan “from words come deeds” and a list of the attacks, including Hanau.

In Cologne, a somber float depicted a weeping Carnival jester holding a heart with the slogan “our heart beats for Hanau.”

Another Duesseldorf float featured Alternative for Germany regional leader Bjoern Hoecke, who called Berlin’s memorial to the victims of the Nazi Holocaust a “monument of shame,” giving a Nazi salute, with his outstretched arm being held up by figures from Merkel’s CDU party and the pro-business FDP.