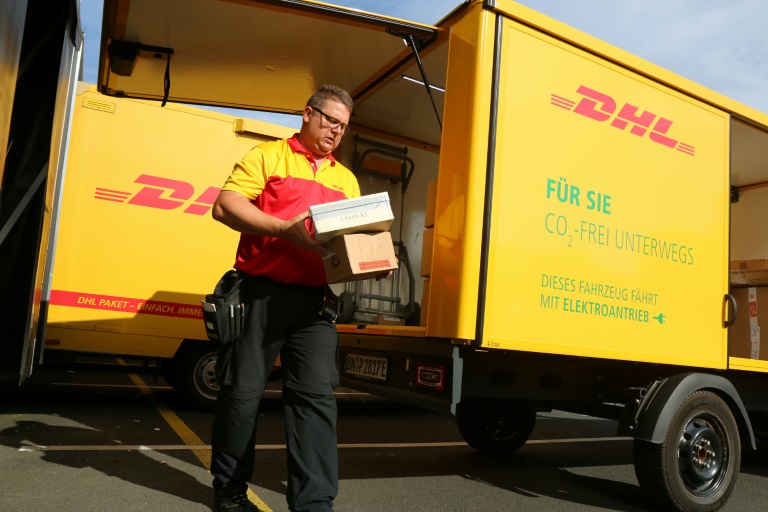 On German streets plied by hulking SUVs and roaring combustion engines, the small, toy-like electric vehicles driven by postmen stand out by their silence and their bright yellow livery.

But even more surprising to many in the car-loving nation is the Deutsche Post horn logo on the prows of the so-called "Streetscooters" -- vans that are not much bigger than the iconic Volkswagen Golf.

To some analysts, the former state-owned logistics firm is showing up auto industry giants like Volkswagen, BMW or Daimler by shifting gears towards vehicle electrification even faster.

More than 6,000 Streetscooters number among the 49,300 vehicles Deutsche Post uses for local deliveries, and the company recently opened a second factory to up production to 40 per day.

When the traditional carmakers were slow to respond to its search for a low-carbon, low-cost van, bosses snapped up a small start-up firm to build its own.

Industry expert Ferdinand Dudenhoeffer of the Center for Automotive Research calls the move "a starting gun" for electric mobility in Germany, where headlines are more often dominated by a seemingly endless diesel emissions scandal.

For 20-year veteran of the Frankfurt post office Miroslav Arapovic, the new vehicle just means he is "less noisy and better integrated into the environment" as he makes his rounds.

"I've already had compliments from passers-by, like for the fact there aren't any oil marks" on the street, he says.

Deutsche Post designed its Streetscooter from scratch as a delivery vehicle for inner cities.

Its battery offers a range of just 80 kilometres (50 miles), massively slashing the costs of production.

Given such "very specific" requirements it was unsurprising that the major manufacturers focused on mass-market models were unable to rise to the challenge, explains Stefan Reindl, director of the Institute for the Automobile Economy (IFA).

Firms like Volkswagen have inflexible production chains, discouraging them from producing at small scale, and they "tend to overengineer" vehicles rather than pursuing minimalism.

For its part, Deutsche Post "does not want to become a carmaker", seeking only to optimise the "last kilometre" of its deliveries, Streetscooter chief Achim Kampker says.

The "last mile", a term adopted from the telecoms industry, is a top question for delivery firms, city authorities and environmentalists, especially in crowded, polluted German city centres.

It refers to the question of how to efficiently move goods from central hubs on to their final destination in densely populated urban areas.

Numbers of delivery vehicles making the rounds have ballooned, as booming e-commerce sets ever-more packages on their way to households' front doors.

A British study found in 2017 that light van traffic in London had increased 30 percent over 1993 levels, unlike car and taxi traffic which has been sinking since the early 2000s

Meanwhile, German cities are scrambling to clean up their air after a court decision ruled that diesel vehicles could be banned as a measure of last resort.

Hamburg and Stuttgart are among the first local authorities to shut off parts of their territory to older cars powered by the fuel.

Despite Kampker's claims of limited ambitions, Streetscooter has gradually become a key player in this growing market, offering its product to outside customers for the past year at a cost of around 40,000 euros ($46,400) each.

In late May, it announced a sale of 200 vans to a British milk delivery firm, while a subsidiary of energy firm Innogy ordered 300 in early July.

Streetscooter is also working on a larger, more powerful model with US-based Ford, which will supply the new van's chassis.

Such early wins are no guarantee of lasting success in an ultra-competitive industry, where traditional carmakers are increasingly switching their focus to electric mobility.

In 2017, Daimler announced a partnership with delivery firm Hermes to develop and produce some 1,500 vans by 2020.

One analyst asks whether Deutsche Post can "remain competitive over the long term" in a market where the likes of BMW and Volkswagen are beginning to throw their massive weight around.

Industry expert Reindl is "certain" that there will be a broad range of offers from the household names in the near future.

"Perhaps it's the moment for them to adapt and to think about whether their products need to be so complex every time," he suggests.

Deutsche Post CEO Frank Appel said in June that he aims to keep Streetscooter within the group "at least for the next two years", although in the long term it may get a separate stock market listing or be bought out by a major carmaker.