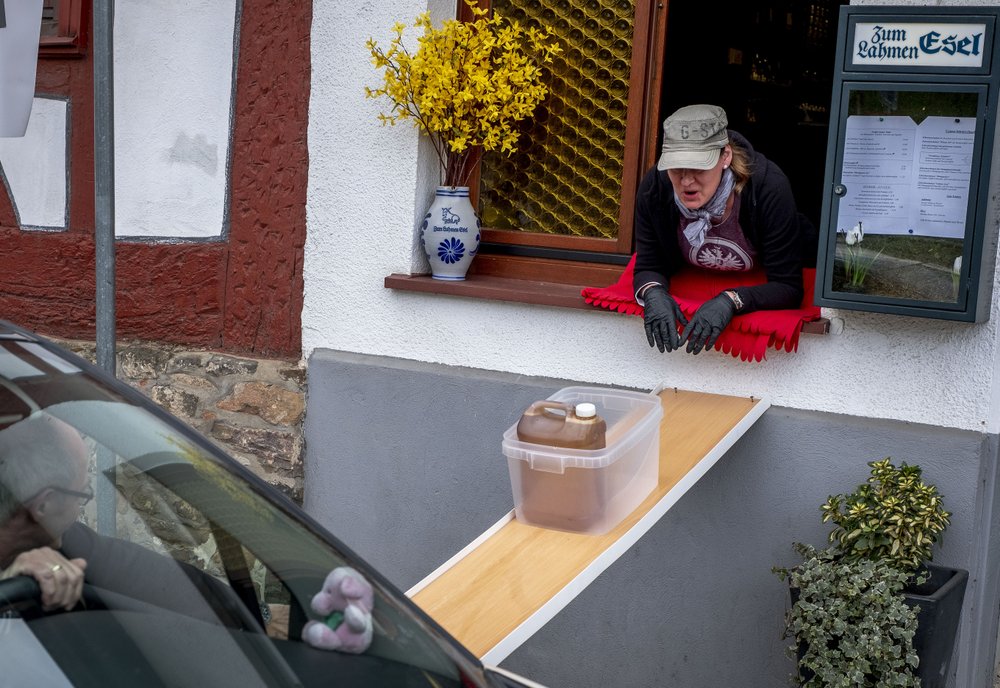 A can with apple cider slides down to car from a window of the apple cider restaurant 'Zum Lahmen Esel' in Frankfurt, Germany, Friday, April 3, 2020. (Photo: AP)

How does a traditional German restaurant comply with the untraditional demands of the coronavirus era?

Thomas Metzmacher was faced with the prospect of having to shut down his Frankfurt restaurant specializing in a traditional tart hard cider due to German regulations prohibiting groups of people from gathering amid the coronavirus pandemic. So he came up with a novel solution.

After toying with the idea of a delivery service, he instead turned his half-timbered restaurant into a makeshift drive-thru. Now he is serving up schnitzel, fried potatoes and other German favorites — of course, the tasty Aeppelwoi cider — to customers waiting in a long line of cars.

“The restaurant had to close, nobody was allowed to sit inside anymore, so it was either give up or fight,” he said. “And I decided to fight.”

Metzmacher’s Zum Lahmen Esel restaurant, which has been in operation since 1807, normally seats 200 people inside and another 200 in an outdoor garden.

Now, cars drive up to a small booth in front of the restaurant, where one of Metzmacher’s 36 employees takes their order, and then pushes a plastic tub down a makeshift slide to the car’s window to take payment at a safe distance. Driving ahead, the customer gets their order in another tub pushed to their window.

Without people sticking around for a few more of the signature ciders, profit margins are low but Metzmacher says it’s better than nothing.

“At least we’re carrying on and we’re continuing to work,” he says.