German readers have recently embraced a series of translated Chinese sci-fi novels, leading to their appearance on several bestseller lists and becoming a hit in Germany. 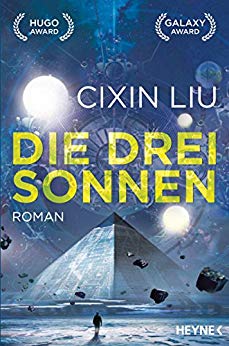 The cover of "The Three-Tody Problem I" German Edition (Photo: Amazon)

Chinese sci-fi bestseller "The Three-Body Problem I" by author Liu Cixin won the 2015 Hugo Award for Best Novel, while two years later its sequel, Death’s End, was also chosen as one of the Best Novel finalists, provoking a keen interest in Chinese science fiction on the international market.

German sinologist Martina Hasse translated the first novel of the trilogy. In Feb. 2017, it ranked fourth in the paperback fiction bestseller list on Der Spiegel, a German weekly news magazine.

Last March, the German version of the second novel, Dark Forest, was published and soon also appeared on the bestseller list.

German translator Marc Hermann showed no surprise that the Three-Body Problem series had become so popular in Germany, saying that any Hugo Award winner would easily open up the global market.

Hermann explained that the Three-Body Problem started a craze of Chinese science fiction translation in Germany. However, he added that only about 10 translated Chinese novels enter Germany annually, most of which are from renowned writers such as Liu Cixin.

Before the recent craze, German readers knew very little about Chinese science fiction writing. For German readers, cultural differences are a major barrier to accepting and understanding Chinese sci-fi. For example, in the Three-Body Problem, a considerable amount of information relates to Chinese history and culture, causing gaps in understanding for those that live outside of China.

Chinese literature has, so far, been moving overseas at a slow and steady pace, but is sure to embrace a bright future as translation and foreign introduction speed up, said Xu Zechen, a writer and editor at People’s Literature magazine.

Xu added that going forward, Chinese literature is set to expand to a broader audience, rather than be limited to a small circle of elite readers and researchers.