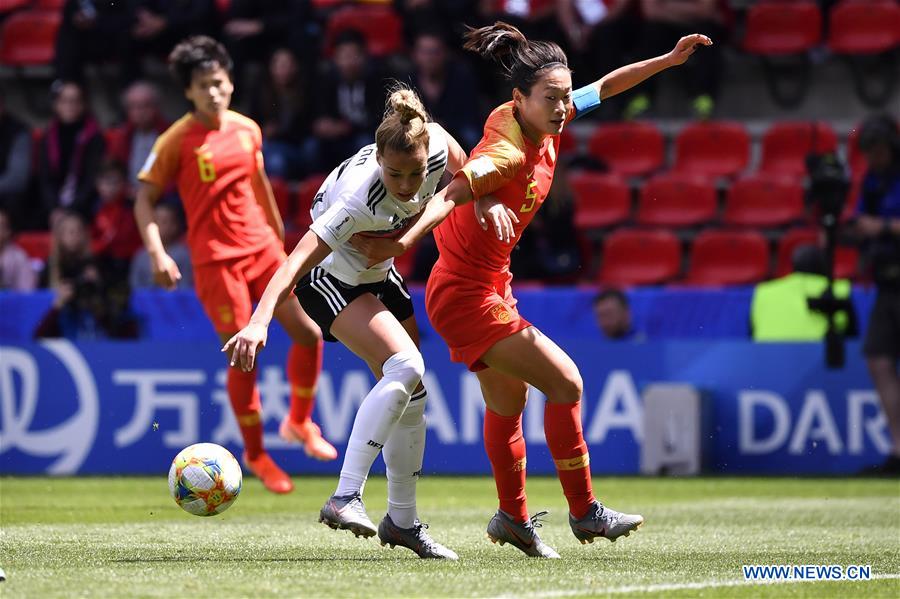 Giulia Gwinn(C) of Germany competes during the group B match between Germany and China at the 2019 FIFA Women's World Cup in Rennes, France, June 8, 2019. (Xinhua/Chen Yichen)

The SC Freiburg defender, who turns 20 in 24 days, hit a clean effort in the 66th minute when she took a touch on the edge of the box and sent the ball past Peng Shimeng and into the up corner of the net. The Chinese defenders were just too slow to close down.

"It's great that Giulia Gwinn got better and better in the match and it's definitely very important that the young players played this very difficult match," German head coach Martina Voss-Tecklenburg said after the match.

"Now they have the experience and know what it's like to play a World Cup match with all the difficulties that brings," she added.

It's deja vu for Gwinn as the German teenager scored against China in last year's Women's U-20 World Cup - also to make it 1-0 and also in the group stages.

Dominating throughout the game, the Germans claimed a 62% possession and shot 18 attempts against China's four. But it was China that could have had some breakthroughs in as many shooting attempts.

"Just now we had a debriefing and recognized our players' performance. We told them that we did well in our attacking and defensive work, we just need to keep working on it," China coach Jia Xiuquan commented.

Into the second half from the bench, Wang Shuang did not make much differences until she was tackled by Germany's substitution midfielder Lena Oberdorf eight minutes from clock.

The 24-year-old stepped up to kick from the spot herself, but failed to pick out anyone in a clear shooting position in front of the goal and midfielder Zhang Rui's late makeup shoot went just over the bar.

Defender Sara Doorsoun was the heroine for Germany before the halftime, leaping across to deny Yang Li who had the goal gaping and really should have scored in the 15th minute.

Yang's another chance came on 45 minutes when China's playmakers Gu Yasha and Zhang Rui combined nicely to set up Yang in front, but the 28-year-old forward sent the ball to the pole.

Just seconds before the halftime whistle, Yang played a nice one-two with her attacking partner Wang Shanshan before Gu Yasha received the ball but hesitated to make a successful shooting effort.

"There was a lot of pressure on our defence, and in our attack we created opportunities. All of this is what we worked on in training and today this was reflected on the pitch, but of course we need to do much more," Jia said.

"Compared to Germany we are not at the same level, but it does not mean we cannot fight," he added.

The game started with Germany pushing harshly on the Steel Roses' defensive line and continuing to stack up chances throughout the first half, during which Carolin Simon once hit the crossbar for the Germans.

China, on the other hand, earned just 39% ball possession before the break, but managed to hold firm and created opportunities in counter-attacks, despite having struggling midfielder Lou Jiahui leaping off after just 34 minutes into the game.