CULTURE Germany the latest victims of the champions curse

Germany the latest victims of the champions curse 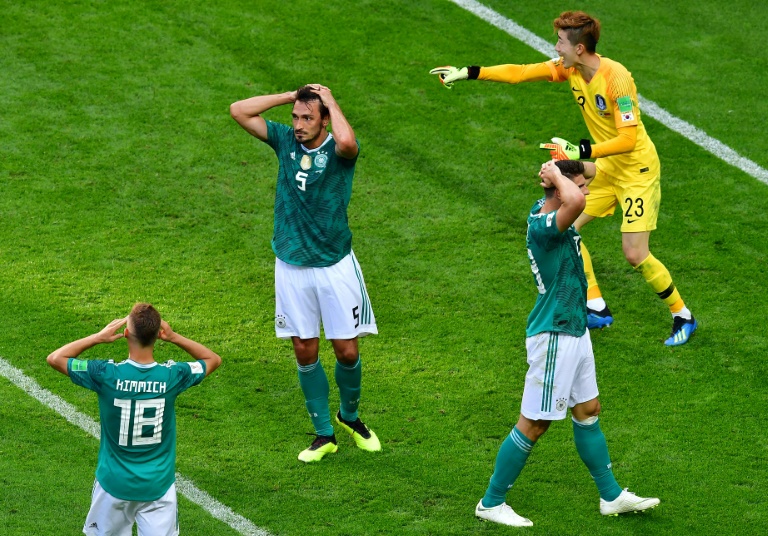 German players can't believe it as they fail to get the better of South Korea and crash out of the World Cup (Photo: AFP)

Germany have been eliminated from a World Cup in the first round for the first time since the Second World War, as the holders are knocked out in the group stage for the fourth time this century.

South Korea's Kim Young-gwon scored the first goal in the third minute of injury time, a goal that sent the Koreans cheering in Kazan and the Mexicans delirious in Yekaterinburg. Originally called out for offside, the goal was given after video review.

Son Heung-min made it 2-0 in the sixth minute of stoppage time after Neuer came up the field to help his teammates outside the South Korea box. Son tapped the ball into an empty net after a long pass from Ju Se-jong.

Leaving aside Uruguay -- who won the inaugural World Cup in 1930 before not travelling to Italy for the 1934 edition -- it is the sixth time in the history of the competition that the reigning champions have failed to make it past the first hurdle.

Italy had won back-to-back World Cups before the Second World War got in the way, and much had changed by the time the 1950 tournament came around in Brazil.

Their team also opted to travel across the Atlantic by boat after several Italian internationals were killed in the Superga air disaster of May 1949 that decimated the great Torino side of the time.

Out of shape after the long journey by sea, the Italians played just two matches, losing 3-2 to Sweden before beating Paraguay 2-0. Sweden topped the group, and Italy went home.

Pele's great Brazil side rocked up in England having won the previous two World Cups. They would win the 1970 trophy too, but 1966 was a disaster.

Pele and Garrincha scored to secure a 2-0 win over Bulgaria at Everton's Goodison Park home in their opening game. However, Bulgaria's rough treatment of Pele forced him to miss their next match, a 3-1 defeat at the hands of Hungary.

'O Rei' returned for their decisive last group outing against Eusebio's Portugal, but was the victim of another meaty tackle and was forced to limp his way through the remainder of the match as Brazil lost 3-1 again to go out.

France came to the World Cup in Japan and South Korea with a wonderful side that had won the trophy on home soil in 1998 and then won the European Championship in 2000.

However, nothing went right for Les Bleus as they went home with their tails between their legs having failed to score a goal never mind win a game.

Zinedine Zidane was missing due to injury as France were stunned 1-0 by Senegal in their first game, and they followed that with a 0-0 draw against Uruguay, as Thierry Henry was sent off.

Zidane was back in time for their last group outing, but could not prevent a 2-0 loss at the hands of Denmark that had them heading home after the worst trophy defence in tournament history.

After the miracle of 2006, when the Azzurri won the trophy in Germany despite the chaos being caused in their domestic game by the Calciopoli scandal, 2010 in South Africa was a spectacular disaster for the Italians.

The presence of veterans like Gianluigi Buffon and Fabio Cannavaro and that of Marcello Lippi on the bench could not prevent Italy from being humbled in the group stage as they failed to win any of their matches.

After having to come from behind to draw with Paraguay and New Zealand, Italy's fate was sealed as they suffered a humiliating 3-2 loss at the hands of Slovakia, who advanced at their expense.

The curse of the champions struck again four years ago in Brazil, as Spain's all-conquering side were stopped in their tracks.

Vicente del Bosque's team arrived in South America having won three consecutive major tournaments between 2008 and 2012, but this proved a step too far for a side lacking the hunger of old.

They knew they were going home after just two matches of a disastrous trophy defence, as a 5-1 humbling at the hands of the Netherlands was followed by a 2-0 defeat against Chile at the Maracana.

It was the end of an era for the likes of Iker Casillas, Xavi Hernandez and Xabi Alonso. A 3-0 win over Australia in their last game was scant consolation.