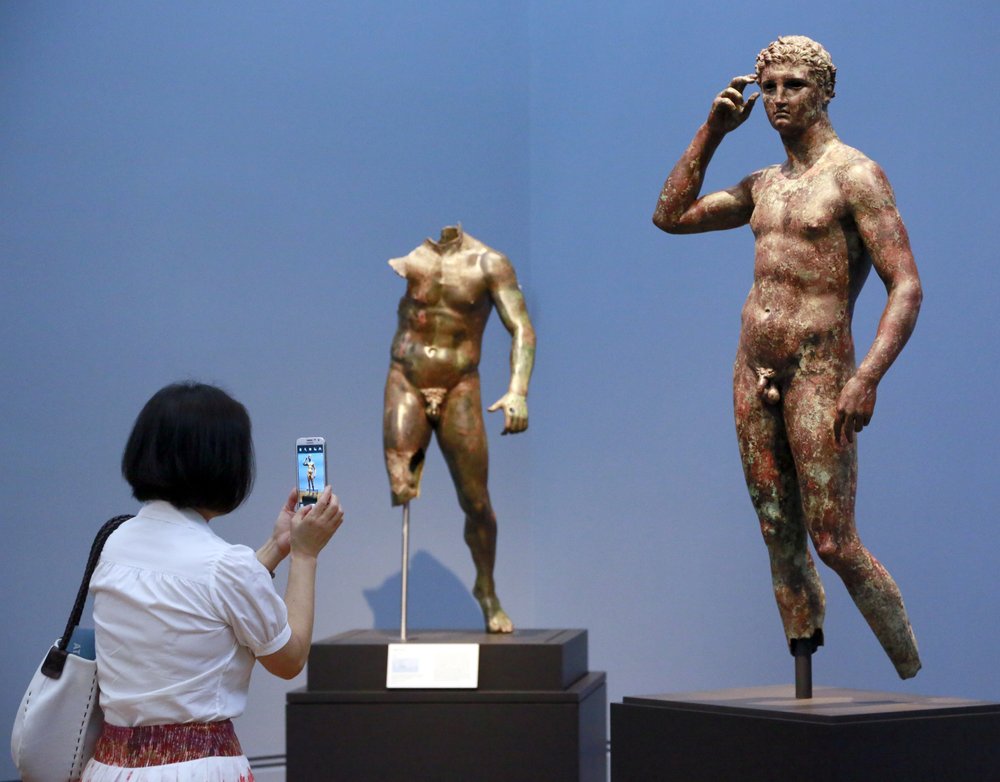 In this Monday, July 27, 2015 photo, reporter Sookee Chung takes a photo of a sculpture titled "Statue of a Victorious Youth, 300-100 B.C." at the J. Paul Getty Museum in Los Angeles. The J. Paul Getty Museum in Los Angeles has vowed to assert its right to keep an important Greek statue after Italy's highest court rejected its appeal of a ruling ordering the artwork to be returned to Italy. The ANSA news agency said Tuesday that the Court of Cassation rejected the appeal outright earlier this week. "Victorious Youth," a nearly life-sized bronze dating from 300 B.C. to 100 B.C., is one of the highlights of the Getty collection. (Photo: AP)

The J. Paul Getty Museum in Los Angeles has vowed to assert its right to keep an important Greek statue after Italy’s highest court rejected its appeal of a ruling ordering the artwork returned to Italy.

The Court of Cassation confirmed Wednesday the appeal had been rejected Nov. 30. The court will issue its written reasoning at a later date.

“Victorious Youth,” a life-sized bronze dating from 300 B.C. to 100 B.C., is one of the highlights of the Getty collection.

An Italian court in Pesaro had ordered it seized and returned in 2010, at the height of Italy’s campaign to recover antiquities looted from its territory and sold to museums and private collectors around the globe.

The Getty says Italy has no claim to the bronze, which was pulled from the sea in 1964 by Italian fishermen, purchased by the Getty in 1977 for $4 million and on display at the Getty since.

In a statement this week, the Getty said it would “continue to defend our legal right to the statue,” arguing that neither the law nor the facts in the case support returning the statue to Italy.

It’s not clear if the Getty will now take an appeal to a European court. Also unclear is if and how the Italian government will try to get the statue back. The Cassation hasn’t yet issued its written ruling explaining its decision.

The Getty noted that the statue is of Greek origin, was found in international waters and has never been part of Italy’s cultural heritage. It cited a 1968 Cassation ruling that found no evidence that the statue belonged to Italy.

“Accidental discovery by Italian citizens does not make the statute an Italian object,” the Getty said.

The statue, nicknamed the “Getty Bronze,” is a signature piece for the museum. Standing about 5 feet (1.52 meters) tall, the statue of the young athlete raising his right hand to an olive wreath crown around his head is one of the few life-sized Greek bronzes to have survived.

Though the artist is unknown, some scholars believe it was made by Lysippos, Alexander the Great’s personal sculptor.

In 2007, the Getty, without admitting any wrongdoing, agreed to return 40 ancient treasures in exchange for the long-term loans of other artifacts. Italy and the Getty have since worked on dozens of collaborations in restoration, exhibition and research projects.