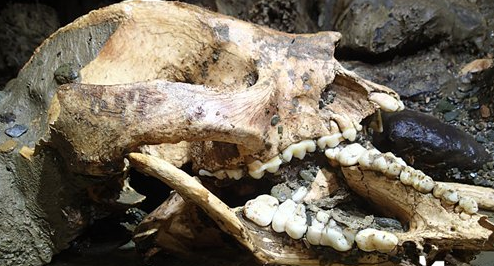 A skeleton of a giant panda was discovered in the Shuanghe cave in Southwest China's Guizhou Province, experts said on Wednesday.The Shuanghe cave, the longest cave in Asia, "grew longer" to 257.4 kilometers - compared to 238.48 kilometers in 2018 - to become the fifth longest in the world, said the 21st expedition team into the cave composed of experts from China, France and Italy on Wednesday. A human skeleton was found less than two meters away from the panda skeleton, Li Po, chair of the Guizhou cave association, was quoted by the China News Service as saying.This is not the first time skeletons of giant pandas were found in the cave. Many fossils of ancient pandas were discovered in April 2016 by the expedition, according to the report of China Central Television (CCTV).On why these fossils of pandas appeared in the cave, the report said that bodies of giant pandas were brought to the cave by water after dying and were stored when flow was slow, finally becoming fossils.More than 60 species have been discovered in the cave in the past 10 years, including a rare endangered animal called winged cat with red fur, which was found in 2016, the China News Service reported.Shuanghe cave is a classic example of a karsts landscape in Guizhou Province. The province's karsts landscape is a UNESCO world heritage site, and the region is also home to an underground kingdom of huge caves, staggering sinkholes and sinking rivers.