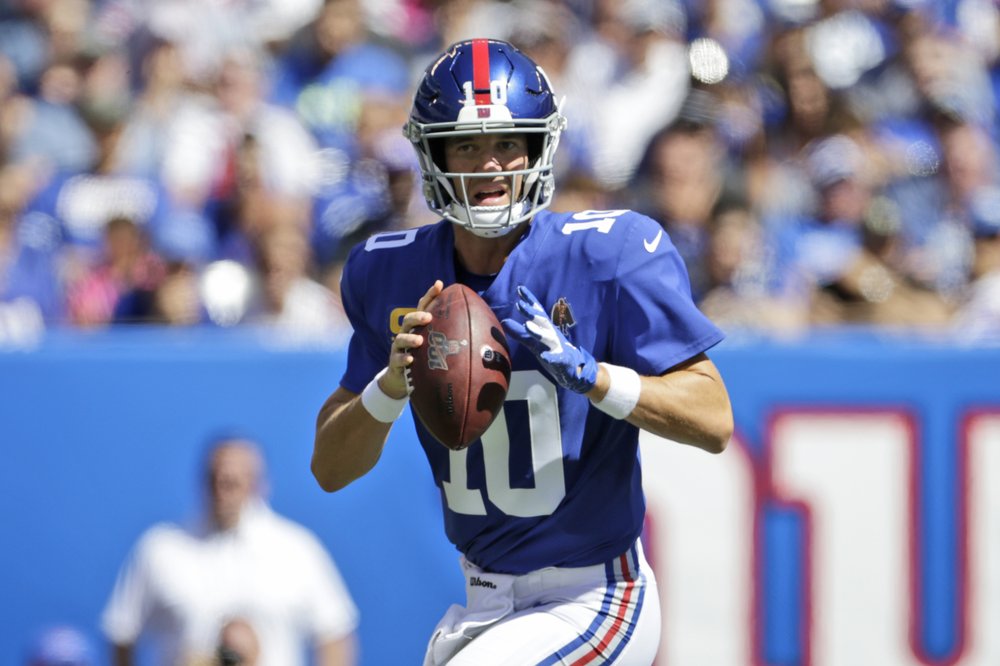 New York Giants quarterback Eli Manning looks to throw during the first half of an NFL football game against the Buffalo Bills, Sunday, Sept. 15, 2019, in East Rutherford, NJ. (Photo: AP)

Coach Pat Shurmur announced Tuesday that the No. 6 overall pick in the NFL draft is replacing two-time Super Bowl MVP as the Giants’ quarterback, beginning Sunday at Tampa Bay.

The move comes less than 24 hours after Shurmur refused to say Manning would remain the starter following two straight losses, the sixth time in seven years New York has gotten off to a 0-2 start.

The 38-year-old Manning has been the Giants’ starter since replacing Kurt Warner after nine games in the 2004 season, the year Manning was traded to New York by San Diego after it took him with the No. 1 overall pick.

Manning led the Giants to Super Bowl titles following the 2007 and ’11 seasons, beating Tom Brady and the Patriots both times.

“Eli and I spoke this morning,” Shurmur said. “I told him that we are making a change and going with Daniel as the starter. I also talked to Daniel. Eli was obviously disappointed, as you would expect, but he said he would be what he has always been, a good teammate, and continue to prepare to help this team win games. Daniel understands the challenge at hand, and he will be ready to play on Sunday.”

In two games, Manning completed 56 of 89 passes for 556 yards, two touchdowns and two interceptions for a passer rating of 78.7. But the Giants have scored only four touchdowns, despite averaging 420 yards.

“Ultimately, this is a move that I felt was best for this team at this time,” said Shurmur, who is in his second season with the Giants. “I have said it since I got here, I am very fond of Eli. His work ethic, his preparation, his football intelligence. All those attributes are as good as I have ever seen in a player. And Eli worked as hard as you could ask of anybody to get ready for this season. This move is more about Daniel moving forward than about Eli.”

The question of when Jones would take over has been a constant topic since the Giants drafted him, and the issue gained momentum when the 22-year-old Duke product completed 29 of 34 passes for 416 yards, two touchdowns, no interceptions in the preseason. His 137.2 quarterback rating was the best in the league.

The hint of an impending change surfaced Monday and a day later, Shurmur benched the man who has been the face of the organization for the past 15-plus years.

Manning, who is playing in a team-record 16th season with the Giants, knew the change was a possibility.

“We’re 0-2 and you are looking for answers,” he said Monday. “I get it, we drafted a guy early and you are not winning games, these things are going to come up. I just have to keep working and do whatever my job is.”

On Sunday, his job will be as Jones’ backup.

Jones will be the third of the 11 quarterbacks selected in this year’s draft to both play and start a game. Kyler Murray, the first overall selection by Arizona, started the Cardinals’ first two games. Gardner Minshew II, a sixth-round selection by Jacksonville out of Washington State, started the Jaguars’ loss Sunday in Houston as a replacement for the injured Nick Foles.

Manning started 210 consecutive regular-season games from Nov. 21, 2004 to Nov. 23, 2017, the second-longest streak by a quarterback in NFL history. Only Brett Favre (297) started more consecutive games. Manning did not play on Dec. 3, 2017, at Oakland when Ben McAdoo started Geno Smith instead.

McAdoo and general manager Jerry Reese were fired the next day and Manning returned to running the team, starting the last 22 games.