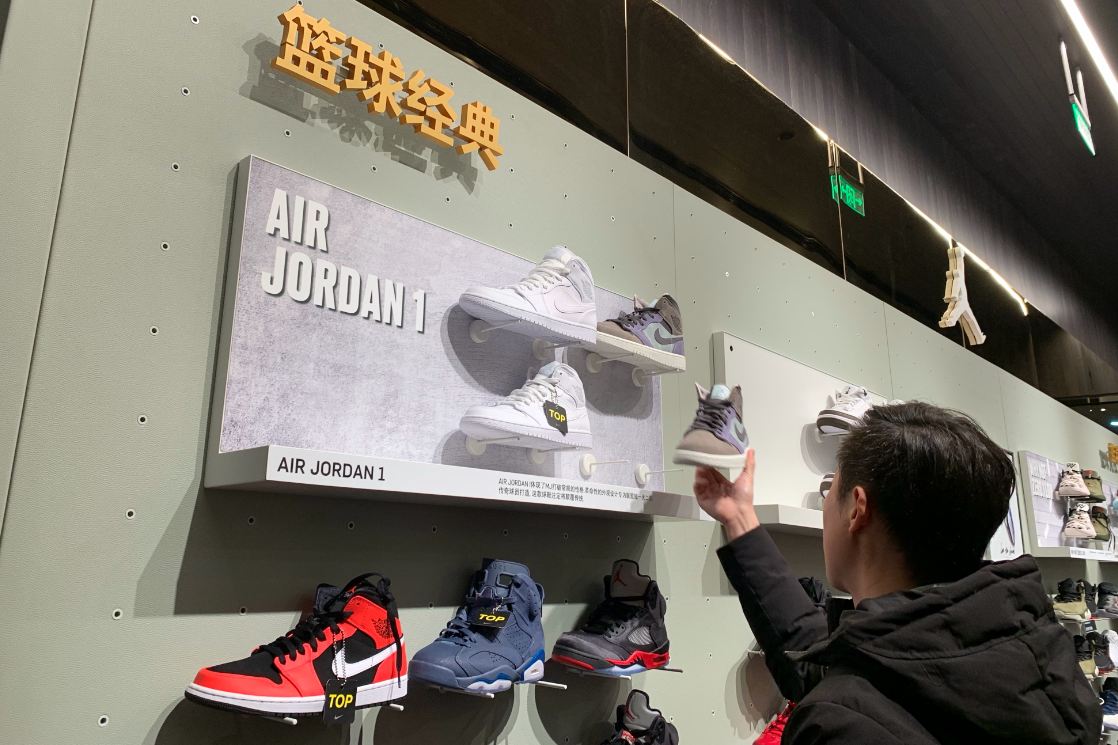 A man checks out Air Jordan shoes at a sportswear store in Fuzhou, capital of Fujian province. (Photo: China Daily)

Endorsed by music celebrities and promoted through popular events, these brands are witnessing a surge in sales in China.

In December, Champion, a US street wear and sportswear brand, launched eight stores in China, swelling its nationwide store count to 41.

In the third quarter of 2018, Hanesbrands Inc, the parent company of Champion and other brands, saw its sales revenue rise 2.7 percent year-on-year to $1.85 billion, mainly on the back of overseas sales, particularly of Champion items, according to its earnings report.

Global sales of Champion surged by 30 percent during the period, driven by double-digit rise in Asia, Europe and the United States, the report said.

"The continuously growing spending power and the willingness of Chinese consumers to spend have helped hit brands, luxury brands and fast fashion brands to expand in China. More hit brands are expected to launch brick-and-mortar and online stores," said Neil Wang, president of the China unit of consultancy Frost & Sullivan.

"More diversified demand, unique and fashionable designs, and the rise of hit brands are in line with China's modern consumption trend. Some TV shows and promotions have further enhanced the popularity of hip-hop culture and street culture," he said.

"Besides, some collection shops in China that sell multiple hit brands have become good shopping destinations for consumers. Such stores have been empowering retailers, supporting designers and opening up industry resources."

Founded in 1919, Champion has been an affordable American fashion brand. In 1975, it signed a cooperation agreement with Japanese brand Goldwin and started the shift to a more trendy brand with better designs.

Later, it successfully launched business in Asia and Europe, and used the blogs of fashion-conscious key opinion leaders or KOLs on online social media to become popular.

Kanye West, Kim Kardashian, and some Chinese pop stars such as Yang Mi and Kris Wu, have worn Champion sweatshirts, raising the brand's profile and sales.

"In the old world, companies were able to meet the demand of consumers with static business models and a 'one size fits all' marketing strategy," said He Xiaoqing, partner and head of consumer and retail industry of AT Kearney China.

"Now, the new business model calls for highly differentiated and tailored approaches, which rely on individual influencers and those who are capable of immediately understanding consumers' signals and translating them into action."

That strategy proved effective. Die-hard fans consumers who were born in the 1990s 1990s now spend 60 to 80 percent of their total expenses on such brands, according to a recent report released by OFashion and global measurement and data analytics company Nielsen.

Such consumers pay special attention to limited editions and styles that are co-designed by pop stars and the brands; they may even buy them for collections.

Sales of such brands are outgrowing traditional brands by four times in China, with top- and second-tier cities seeing high volumes. In smaller cities, however, spending volume has been low, but the growth rate is much faster, the report said.

Nevertheless, Wang of Frost & Sullivan said the exaggerated and special designs of hit brands are not favored by some Chinese consumers who regard them unsuitable for daily wear. If sales are still rising, it could be because most consumers just try to catch up with fashion.

"For Chinese emerging hit brands, it's kind of difficult to maintain long-term growth. If the brands choose to develop on a large scale after the appearance of phenomenal hit products, they will lose the original cultural connotation and identity," he said.