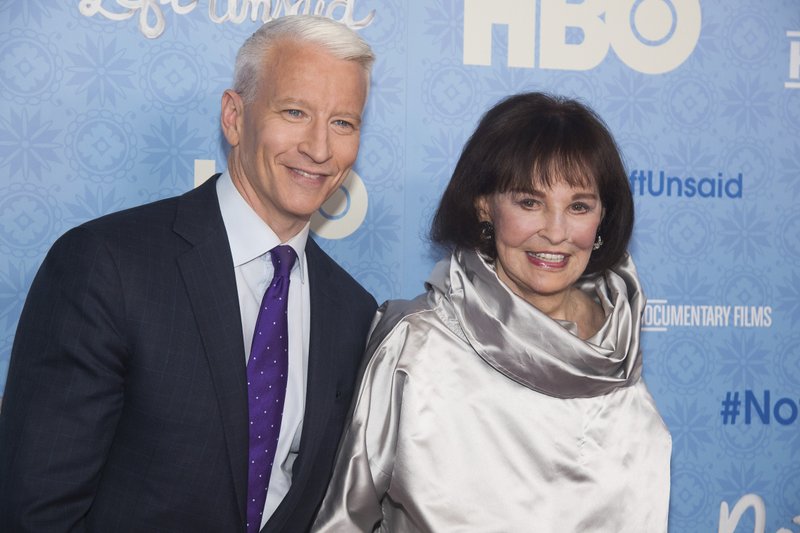 CNN anchor Anderson Cooper and Gloria Vanderbilt attend the premiere of "Nothing Left Unsaid" at the Time Warner Center in New York, April 4, 2016. Vanderbilt, the "poor little rich girl" heiress at the center of a scandalous custody battle of the 1930s and the designer jeans queen of the 1970s and '80s, died on Monday, June 17, 2019, at 95, according to her son, Cooper. (Photo: AP)

Gloria Vanderbilt, the intrepid heiress, artist and romantic who began her extraordinary life as the “poor little rich girl” of the Great Depression, survived family tragedy and multiple marriages and reigned during the 1970s and ’80s as a designer jeans pioneer, died Monday at the age of 95.

Vanderbilt was the great-great-granddaughter of financier Cornelius Vanderbilt and the mother of CNN newsman Anderson Cooper, who announced her death via a first-person obituary that aired on the network Monday morning.

Cooper said Vanderbilt died at home with friends and family at her side. She had been suffering from advanced stomach cancer, he noted.

“Gloria Vanderbilt was an extraordinary woman, who loved life, and lived it on her own terms,” Cooper said in a statement. “She was a painter, a writer, and designer but also a remarkable mother, wife, and friend. She was 95 years old, but ask anyone close to her, and they’d tell you, she was the youngest person they knew, the coolest, and most modern.”

Her life was chronicled in sensational headlines from her childhood through four marriages and three divorces. She married for the first time at 17, causing her aunt to disinherit her. Her husbands included Leopold Stokowski, the celebrated conductor, and Sidney Lumet, the award-winning movie and television director. In 1988, she witnessed the suicide of one of her four sons.

Tributes online came from celebrities and fans of her clothes alike. Alyssa Milano called her “an incredible woman,” Dana Delany said she treasures one of her paintings and one Twitter user mourned by remembering the canary Vanderbilt jeans she wore in junior high school.

Vanderbilt was a talented painter and collagist who also acted on the stage (“The Time of Your Life” on Broadway) and television (“Playhouse 90,” ″Studio One,” ″Kraft Theater,” ″U.S. Steel Hour”). She was a fabric designer who became an early enthusiast for designer denim. The dark-haired, tall and ultra-thin Vanderbilt partnered with Mohan Murjani, who introduced a $1 million advertising campaign in 1978 that turned the Gloria Vanderbilt brand with its signature white swan label into a sensation.

At its peak in 1980, it was generating over $200 million in sales. And decades later, famous-name designer jeans — dressed up or down — remain a woman’s wardrobe staple.

Vanderbilt wrote several books, including the 2004 chronicle of her love life: “It Seemed Important at the Time: A Romance Memoir,” which drops such names as Errol Flynn, whom she dated as a teenager; Frank Sinatra, for whom she left Stokowski; Marlon Brando and Howard Hughes.

She claimed her only happy marriage was to author Wyatt Cooper, which ended with his death in 1978 at age 50. Son Anderson Cooper called her memoir “a terrific book; it’s like an older ‘Sex and the City.’”

“I’ve had many, many loves,” Vanderbilt told The Associated Press in a 2004 interview. “I always feel that something wonderful is going to happen. And it always does.”

Noting her father’s death when she was a toddler, she said: “If you don’t have a father, you don’t miss it, because you don’t know what it is. It was really only when I married Wyatt Cooper that I understood what it was like to have a father, because he was just an extraordinary father.” 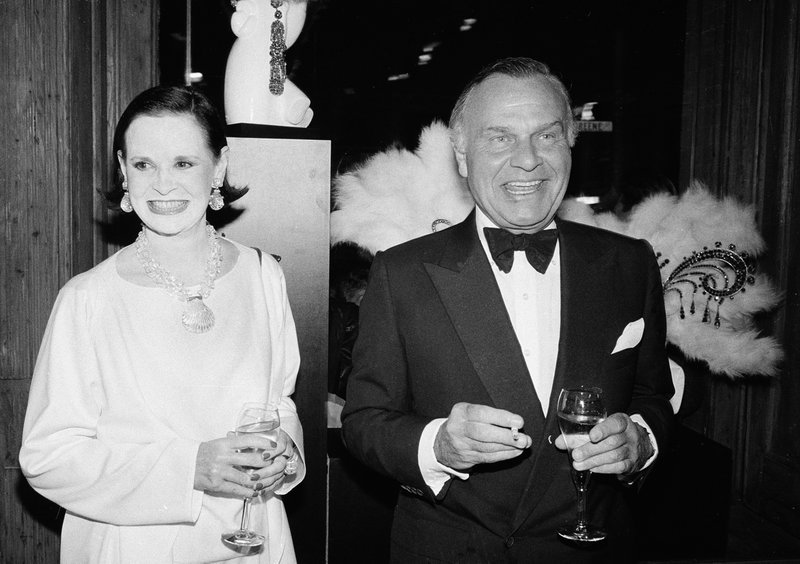 Fashion designers Gloria Vanderbilt, left, and Bill Blass are shown at the 90th birthday celebration of artist Erte in New York, November 9, 1982. Vanderbilt, the intrepid heiress, artist and romantic who began her extraordinary life as the "poor little rich girl" of the Great Depression, survived family tragedy and multiple marriages and reigned during the 1970s and '80s as a designer jeans pioneer, died June 17, 2019, at the age of 95. (Photo: AP)

In 2016, Vanderbilt and Anderson Cooper appeared together in the HBO documentary “Nothing Left Unsaid.”

Gloria Laura Madeleine Sophie Vanderbilt was born in 1924, a century after her great-great-grandfather started the family fortune, first in steamships, later in railroads. He left around $100 million when he died in 1877 at age 82.

Her father, Reginald Claypoole Vanderbilt, was 43, a gambler and boozer dying of liver disease when he married Gloria Morgan, 19, in 1923. Their daughter was 1 when Vanderbilt died in 1925, having gone through $25 million in 14 years.

Beneficiary of a $5 million trust fund, Vanderbilt became the “poor little rich girl” in 1934 at age 10 as the object of a custody fight between her globe-trotting mother and matriarchal aunt.

The aunt, Gertrude Vanderbilt Whitney, 59, who controlled $78 million and founded the Whitney Museum of American Art, won custody of her niece.

A shocked judge had closed the trial when a maid accused the child’s mother of a lesbian affair with a member of the British royal family. The fight was chronicled in the best-selling 1980 book “Little Gloria ... Happy at Last,” made into a TV miniseries in 1982 with Angela Lansbury playing Whitney.

After spending the next seven years on her aunt’s Long Island estate, Vanderbilt went to Hollywood. She dated celebrities and declared she would marry Hughes. Instead, the 17-year-old wed Hughes’ press agent, Pasquale di Cicco, prompting her aunt to cut Gloria out of her will.

Vanderbilt came into her own $5 million trust fund in 1945 at age 21. She also divorced Di Cicco, whom she said had beaten her often, and the next day married the 63-year-old Stokowski. The marriage to the conductor lasted 10 years and produced two sons, Stanislaus and Christopher.

After her marriage broke up, Vanderbilt found herself embroiled in another custody case, this time as the mother. During the closed hearings, Stokowski accused Vanderbilt of spending too much time at parties and too little with the boys. She accused him of tyrannizing his sons and said he really was 85, and not 72 as he claimed.

Justice Edgar Nathan Jr. gave Vanderbilt full-time custody. But he commented that the court had wasted a month on “the resolution of problems which mature, intelligent parents should be able to work out for themselves.”

Vanderbilt married Lumet in 1956 and lived with him and her children in a 10-room duplex penthouse on Gracie Square. She divorced Lumet and married Cooper in 1963. 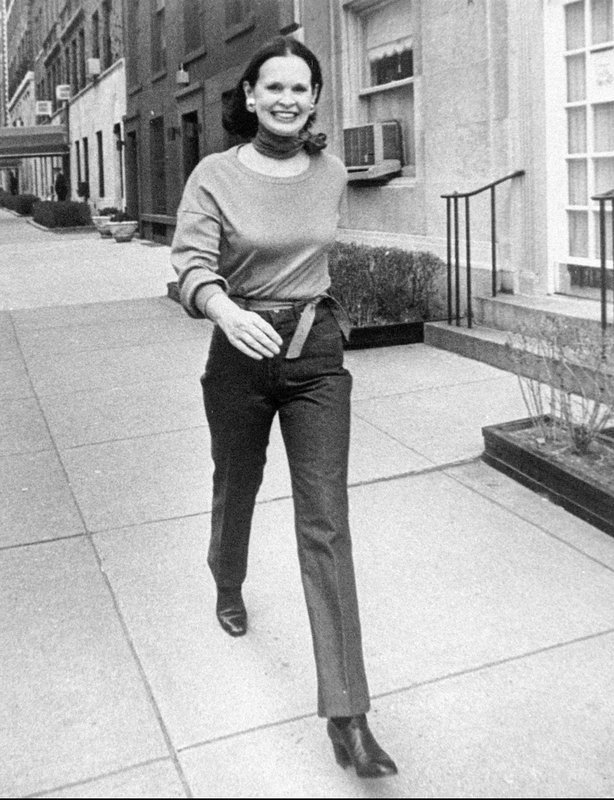 Their elder son, Carter, a Princeton graduate and editor at American Heritage, killed himself in 1988 at age 23, leaping from his mother’s 14th floor apartment as she tried to stop him. Police said he had been treated for depression and friends said he was despondent over a break-up with a girlfriend. Vanderbilt says in “Nothing Left Unsaid” that she contemplated following him, but the thought of how it would devastate Anderson stopped her.

After her success in designer jeans, Vanderbilt branched out into other areas, including shoes, scarves, table and bed linens, and china, through her company, Gloria Concepts. In 1988 Vanderbilt joined the designer fragrance market with her signature “Glorious.”

By the late 1980s, Vanderbilt sold the name and licenses for the brand name “Gloria Vanderbilt” to Gitano, who transferred it to a group of private investors in 1993. More recently, her stretch jeans have been licensed through Jones Apparel Group Inc., which acquired Gloria Vanderbilt Apparel Corp. in 2002 for $138 million.

Vanderbilt became the target of a swindle in the late 1970s and early ’80s when she made her psychiatrist and a lawyer associates in her business affairs. A court held that the two had looted millions from Vanderbilt’s bank accounts.

Vanderbilt also made headlines in 1980 when she filed, but later dropped, a discrimination complaint against the posh River House apartments, which had rejected her bid to buy a $1.1 million duplex. She claimed the board was worried that black singer Bobby Short, who appeared with her on TV commercials, might marry her.

In an interview with The New York Times, she said she wasn’t embarrassed about the explicitness of her new book, saying: “I don’t think age has anything to do with what you write about. The only thing that would embarrass me is bad writing, and the only thing that really concerned me was my children. You know how children can be about their parents. But mine are very intelligent and supportive.”