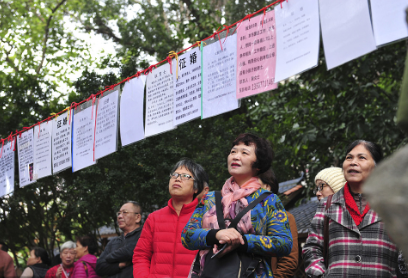 Parents are checking out information of possible dates for their children in a park in Nanning, capital city of south China's Guangxi Zhuang Autonomous Region, January 26, 2019. (Photo: VCG)

It's the Spring Festival once again. Over the years, the oldest holiday for family reunions in China has, however, been shunned by many singletons approaching or over 30 years old. For those in that age band, the festival is no more than a pestering week when they have to deal with their nagging parents.

Pressuring their children to get hitched has long been a family affair since China's unprecedented socio-economic changes extended the years of women's education, gave them financial freedom and cultivated their sense of independence. Governments and relevant sectors also started settling on mass matchmaking for these singles.

For this year's Spring Festival, worried parents may feel slight relief as employers have joined in on the crusade against singledom.

In east China's Hangzhou, two companies tried to get their single female employees above 30 out of the house during the annual holiday. Songcheng, a private dynasty theme park operator consisting of a performance group and a tourism management company in the affluent coastal city, announced an eight-day paid holiday on top of the seven-day Spring Festival break for 30-something single female employees to go home and date.

In the notice issued late last month, those who get a marriage certificate within the new year will be awarded a double year-end bonus. Huang Lei, the company's human resources manager, said women will be more dedicated to their work if they have happier personal lives. She adds that women working in non-native cities are often arranged to go on blind dates by their parents during the festival, and an extended holiday may give them more time with their dates.

Songcheng is not the first to offer women employees a paid dating holiday. One week ago, a middle school in Hangzhou announced an extra two half days of "love leave" every month for single female teachers.

The measures have drawn a puff of controversy. Some netizens have lauded the policy as humanistic for providing female employees with more leave, while others have lambasted it as a discriminatory practice embedded in the cultural stigma against "leftover women." "In the announcement, 'single,' 'women,' and '30' stand out in offending the eyes," a user said on social media platform Weibo.

There is also the fear that getting more time off for being a woman could put pressure on other companies to follow suit in providing a similar policy, thus contributing to further corporate discrimination against employing women. There were even rumors that the “dating holiday” is little more than hype given that Songcheng's stocks surged 4 percent after the announcement was made.

Fueling this policy is the traditional mentality that a woman must fulfill her duties of getting married and bearing children. Therefore, though companies have put a positive spin on this policy, the underlying assumption is that women who are aging and still single are somehow deficient, and their condition must be rectified.

A modern, urban society also serves as a wider context for this pressure to marry. One is China's aging population, which means that the country will soon see a labor shortage due to a smaller pool of working age youth. In 2017, the number of Chinese citizens aged 60 or above reached 241 million, or 17.3 percent of the country's total population. That proportion is estimated to surge to 35 percent by 2050, according to the World Health Organization.

Officials are keen to halt the formation of this inverted population pyramid by encouraging women of childbearing age to procreate. Although the government implemented the two-child policy three years ago, the fertility rate has barely budged as educated urbanites have delayed or even forwent having children due to high living costs and greater societal opportunities.

Statistics from the Ministry of Civil Affairs in 2015 show that China had over 200 million single adults. Meanwhile, the marriage rate has spiraled downward by nearly 30 percent over the past five years. From another perspective, a shift in focus to individuality and freedom of choice might be fortuitous for socio-economic development.

As a recent poll by the China Youth Daily reveals, 86.4 percent of respondents express an anxiety of being pushed toward marriage. However, things may not be that bleak. Many single ladies in their late 20s or 30s still choose to spend the Spring Festival holiday with their families despite somewhat frayed bonds over the commitment issue.

"Though I'll be really cross when being compared to 'yellowed pearls,' I will of course head back to my sweet home to spend the holidays with my dear parents," said my friend Yue, on the train back to her hometown on Lunar New Year's Eve.