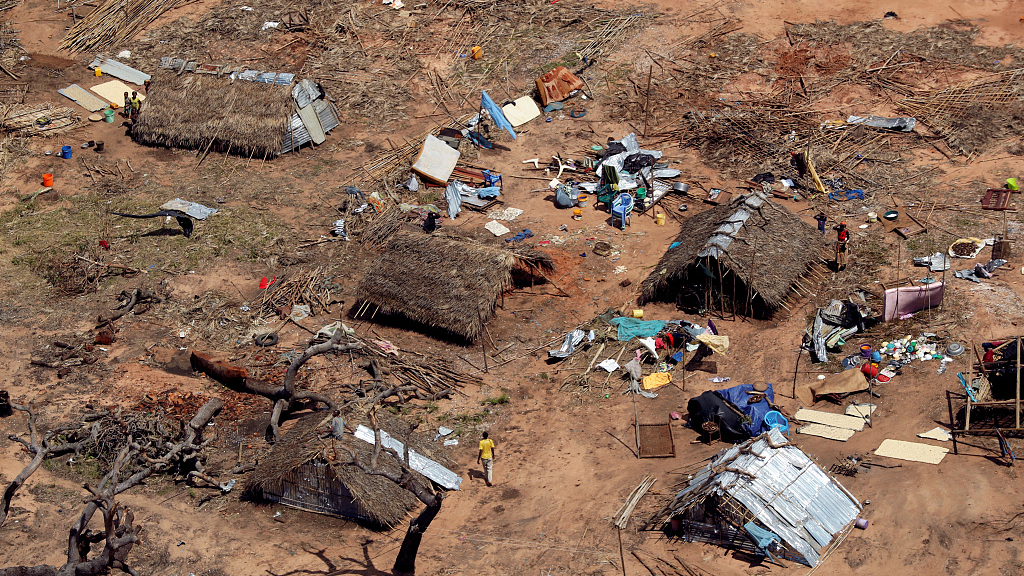 Buildings damaged after Cyclone are seen from the air in a village north of Pemba, Mozambique, May 1, 2019. (Photo: VCG)

Earlier this year, Cyclone Idai swept across Mozambique. Its powerful winds and heavy rains led to massive floods, hundreds of deaths, and the large-scale destruction of crops and property. An estimated 140,000 people were displaced, and six months later, nearly one million people, including 160,000 children under five, are still facing food shortages and a nutrition crisis.

Idai was not the first cyclone to upend the lives of farmers in southern Africa, and it won't be the last. As climate change continues, such storms will become more frequent and intense, as will droughts, with which farmers in Mozambique already struggle. But there is a simple way to boost climate resilience for farmers in vulnerable regions: investment in goat markets.

Goats are relatively low-maintenance livestock. They do not require much up-front investment in housing or equipment. And they are hardy: goats are much more likely to survive a long dry period than, say, grains. They even eat failed crops.

Like other forms of property, a herd of goats can function as a kind of savings account for farmers, who can purchase more animals when they have the cash to spare, and sell some off in times of trouble. This is particularly true in Mozambique, where demand for goat meat is booming, prices are rising, and large abattoirs are actively seeking to purchase goats from smallholder farmers.

Yet farmers in Mozambique struggle to take advantage of this opportunity, owing to factors like poor market conditions and rampant theft. These are the problems that my colleagues and I at the International Crops Research Institute for the Semi-Arid Tropics – together with the Agricultural Research Institute of Mozambique and the Center for Development Research at the University of Natural Resources and Life Sciences in Vienna – are now endeavoring to solve.

We have launched an initiative to link farmers in Mozambique's drought-prone Marara district with agricultural extension services and local governments, abattoirs, and farming-goods suppliers. This "innovation platform" – which now includes 60 farmers in six villages – has enabled the development of collaborative solutions that are suited to local conditions. It works to improve goat markets by providing direction and incentives for agricultural extension services and investments.

Consider livestock theft. In Marara district, farmers were hesitant to invest in more animals, because unknown perpetrators were regularly stealing free-roaming goats. Thanks to the innovation platform, villagers, local government, and police were able to work together to devise a strategy to combat the thefts, centered on erecting roadblocks in strategic locations.

The platform has also facilitated the creation of a more structured goat market that better suits farmers' needs. Traditionally, goats in central Mozambique have been traded through a single market. But reaching that market often requires farmers to travel a considerable distance with their goats, which lose weight during the journey. Because a skinny goat is worth less to the abattoir, it fetches a lower price for the farmer. To avoid the journey, farmers might have to rely on unscrupulous middlemen.

Since the introduction of the innovation platform, abattoirs and farmers have begun working to establish new, smaller sales points, closer to both buyers and sellers. So far, our data suggest that farmers who are participating in the innovation platform have been better able to meet market demand and are earning more for their goats. In fact, some farmers are prepared to expand their production and are working with abattoirs to establish a quality-based pricing system.

Establishing a structured, well-functioning goat market helps to create a positive feedback loop. If farmers are confident their goats will not be stolen and can sell them at a decent price, they are better able to invest in improving their production system.

Here, too, the innovation platform is helping. For starters, we have trained farmers on how to improve their soil by expanding legume crops, the residues of which can be used as goat fodder. Recognizing the benefits of these practices, farmers immediately began increasing crop density, applying manure, and rotating crops, thereby increasing yields and producing more feed for healthier goats. We have also trialed on-farm soil analyses that can help farmers detect soil health problems and devise their own solutions – for example, growing more legumes or adding manure and compost.

More broadly, the innovation platform has kick-started a process in which farmers support one another to build a stronger market. For example, more successful goat farmers in the Marara district are advising their poorer counterparts on how to get started.

With support from government agencies and development organizations, goat markets could continue to grow, increasing the incomes and resilience of farmers in Marara district and beyond. Such support could include investment in technical extension services for livestock farmers, particularly for women and poor farmers, mediation of price negotiations between buyers and sellers, and the establishment of reliable metrological services.

To enable such progress, it is vital to keep the innovation network alive. As climate change continues, the challenges smallholder farmers face will only grow. Their best chance of weathering them is by acting together.