Tokyo Olympic organisers on Wednesday unveiled medals designed to reflect the "energy" of athletes as the city marked a year to go until the opening ceremony of the 2020 Summer Games. 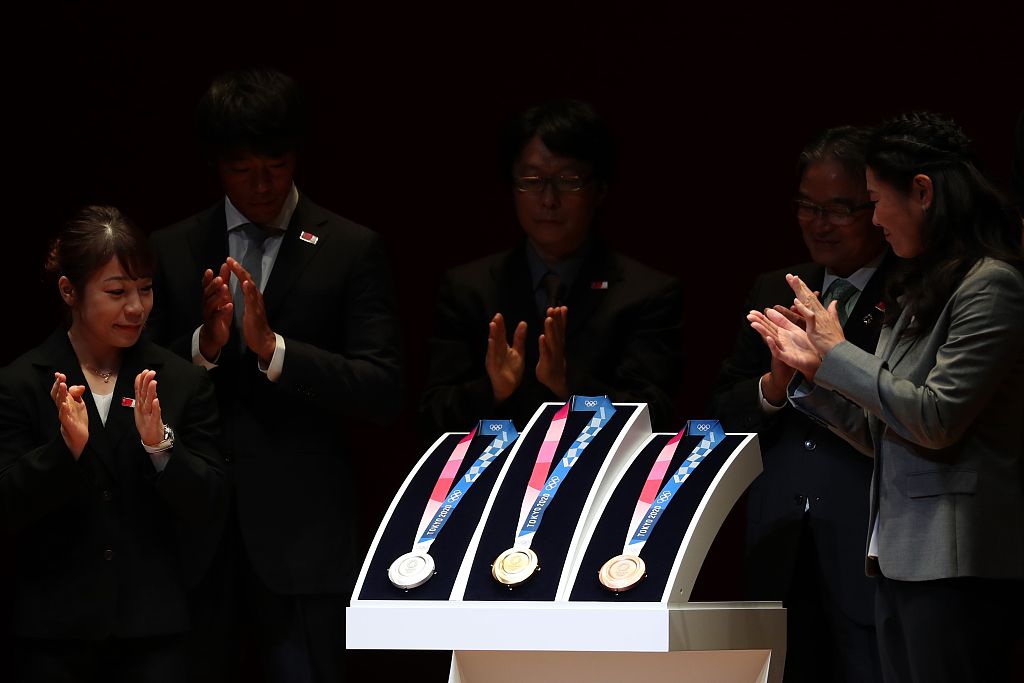 Medals for the Tokyo 2020 Olympic Games are unveiled during a ceremony marking one year before the start of the games in Tokyo on July 24, 2019. (Photo: VCG)

The medals, which will be made from recycled materials collected from old electronics, are intended to "resemble rough stones that have been polished and which now shine," organisers said.

The gold, silver and bronze awards each have a rough, almost meringue like surface on the outer ring, encircling a smooth, shining centre.

"The medals collect and reflect myriad patterns of light, symbolising the energy of the athletes and those who support them," the organisers said.

The medals were unveiled at a ceremony marking the year-to-go countdown until the Tokyo 2020 Games, with International Olympic Committee chief Thomas Bach praising the city's readiness.

"I can truly say I have never seen an Olympic city as prepared as Tokyo, with one year to go before the Olympic Games," Bach said.

"All the elements that make a truly outstanding Olympic Games are in place," he added, predicting "an amazing experience" for athletes.

The Olympic medals design was chosen from more than 400 entries from professional designers and design students.

"I never dreamed that the design I submitted only as a memorial to this lifetime event would be actually selected," designer Junichi Kawanishi said.

"I hope the medals will be seen as paying tribute to the athletes' efforts, reflecting their glory, and symbolising friendship."

The medals will come on ribbons that use traditional Japanese chequered patterns and graphics that symbolises kimono layering techniques.

Miyata said there is "a beautiful balance between the design of the medals and their ribbons. It makes me want to strive for a medal myself."

The medals, which will weigh in at between 556 and 450 grams (20 ounces and 16 ounces) each, are being manufactured from metal extracted from mobile phones and other small electronics donated by the Japanese public as part of a campaign to make Tokyo 2020 eco-friendly.