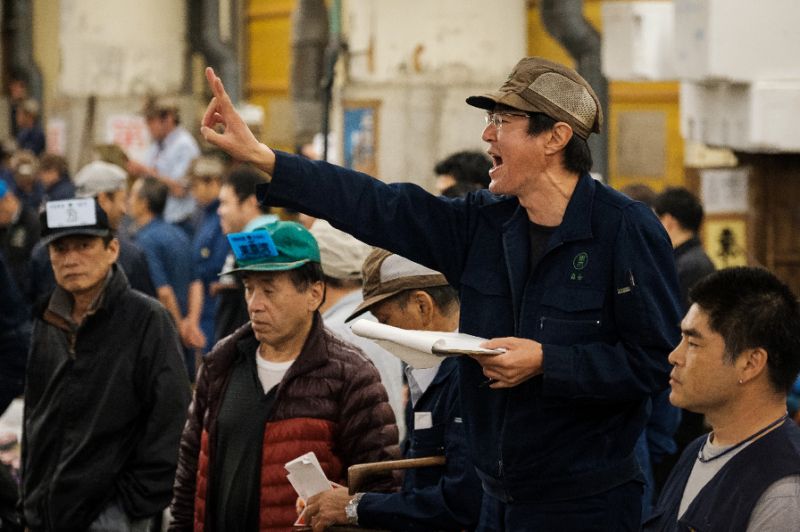 An auctioneer shouts out during the final tuna auction at Tokyo's Tsukiji fish market, which has closed its doors to relocate to a more modern complex (Photo: AFP)

Tokyo fishmongers gathered before dawn Saturday for one final tuna auction at the world-famous Tsukiji market before it closed its doors to move to a new site.

It was an emotional moment for veterans of the market, the beating heart of Tokyo's culinary scene for decades, which many acknowledged had become too rundown to support its mammoth operations.

"I'm almost crying," said Hisao Ishii, a retired seafood auctioneer who was back at the market for its final day.

"Today is a sad day of goodbyes. Tsukiji tried to meet the times, but it is getting older," the 68-year-old told AFP. "I came here today to tell Tsukiji thank you and goodbye."

In the weak early-morning sun, traders filed into a warehouse for the last tuna auction, an indispensable ritual in Tokyo's culinary world, and a major tourist draw.

Hundreds of fresh and frozen tuna tagged with their weight and port of origin were laid out in lines in a refrigerated warehouse, as buyers in rubber boots quietly inspected the wares.

They rubbed slices between their fingers and shone torches into the insides of the fish, swapping information with rivals before the showdown began.

At 6:00 am sharp, handbells rang to signal the auction was under way and the air filled with the sound of auctioneers yelling prices at buyers, who raised fingers to indicate interest.

The highest bidder at Saturday's auction paid 4.4 million yen ($38,700) for a bluefin tuna -- a threatened species -- weighing 162 kilograms (357 pounds) caught off Aomori, northern Japan, according to the market.

It was far below the record 155.4 million yen paid at the first auction of 2013. Buyers traditionally offer eye-watering prices as a "New Year gratuity" when the market resumes operation after winter holidays.

Fish wholesaler Takeshi Yoshida said Tsukiji had left "its mark on history" but it was time to "pass the baton".

Tsukiji's inner market, known as "Japan's Kitchen", will now move to Toyosu, a site in eastern Tokyo, where operations will begin on October 11.

"It will be the first massive move in our history," said Hiroyasu Ito, chair of the market association.

"We want to club together and get through it," he told reporters.

The move has been in the works for years, prompted by Tsukiji's dilapidated state.

Wholesalers had raised concerns about the antiquated facility's earthquake resistance, sanitation and fire safety, as well as the structure's use of asbestos and its crumbling walls.

The crowds of tourists who would mob the market, including groups who lined up for hours to win one of just 120 spots for the tuna auction, would also irk wholesalers by interfering with business.

The new site will feature state-of-the-art refrigeration, while tourists will be confined to special galleries behind glass.

But the move has proved controversial, with rows breaking out over pollution and the loss of Tsukiji's globally recognised brand.

Tokyo Governor Yuriko Koike was forced to delay the move after a series of problems at Toyosu, formerly home to a gas plant, including soil and groundwater contamination.

Local authorities paid hundreds of millions of dollars to clean up the new facility and Koike took the final decision to move the market there in late 2017, ending years of delays.

The move affects not only the famed fishmongers, but also fruit and vegetable vendors, restaurants and other shops in the inner market.

"I feel nostalgic as Tsukiji has been my home ground for 15 years. We are sad to lose the Tsukiji brand," vegetable wholesaler Tsukasa Kujirai told AFP.

He acknowledged the need for the move but said he was torn between "hopes and fears" about the new site.

The final day of the market looked much like any other in the decades since it opened on the site.

Cars and small "turret trucks" used by vendors whizzed along the roads around the market, which was full of buyers.

As the market closed at noon, workers busily mopped the empty floor after the auction, while hundreds of tourists flocked to the gate, taking pictures of the market's nameboard.

"It's so sad to hear that this very popular and interesting tourist spot will be closed," said Rodolfo Hernandez, a 28-year-old graduate student from Mexico.

The so-called outer market, with brick-and-mortar shops selling everything from seaweed to coffee, will remain after the move.

But the warehouses that housed vendors and additional shops and restaurants are expected to be levelled to make way, initially, for a transport depot for the 2020 Olympic Games.

Beyond that, Koike has suggested the site could be transformed into a kind of culinary theme park, commemorating the market's colourful history.