The giant panda, dubbed China’s national treasure, improved its official status from “endangered” to “vulnerable” when the International Union for Conservation of Nature updated its Red List in 2016, thanks to Chinese conservationists’ decades of efforts to boost the population. 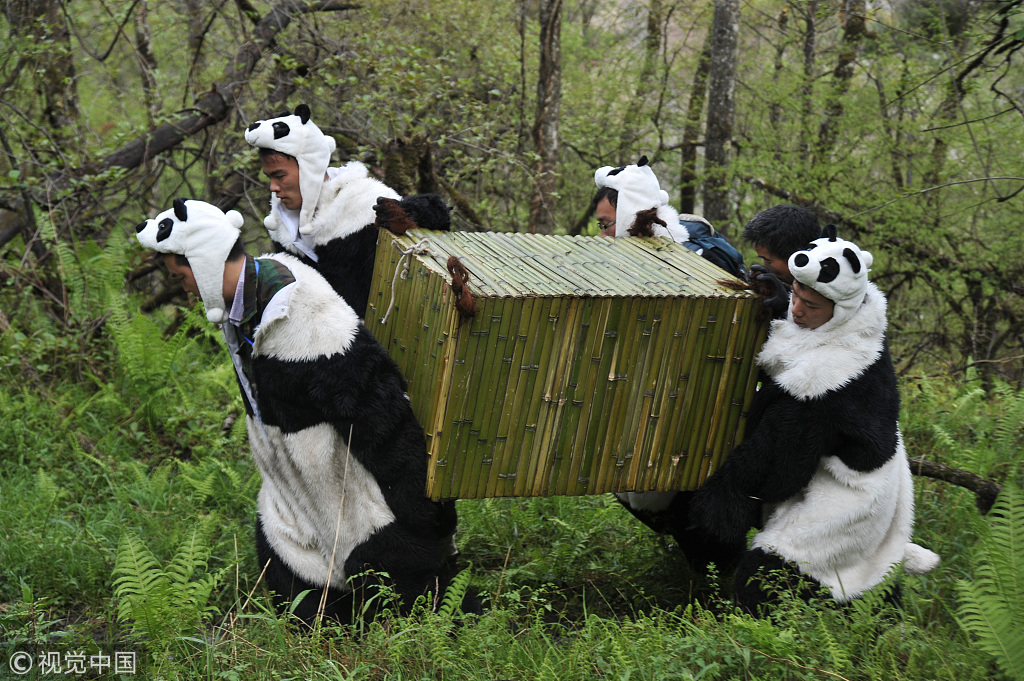 On May 3, 2012, researchers in panda suits carried a bamboo crate to help move a panda to its new wild training ground at the Hetaoping base which is used for wilderness traning for captive pandas. (Photos: VCG)

After the panda workers made ground-breaking progress in breeding captive pandas, they turned their eyes beyond panda enclosures and started to explore ways to send them back to the wild where they originally belonged.

Since 2003, China has been building training bases to captive-breed pandas before their release into their native habitats, marking the start of China’s first wild release program.

China now runs at least three training centers and two release bases, all of which are located in the mountainous Sichuan Province in Southwest China. The area is known as the "cradle of the panda" to the public, and a biodiversity hotspot to conservationists. 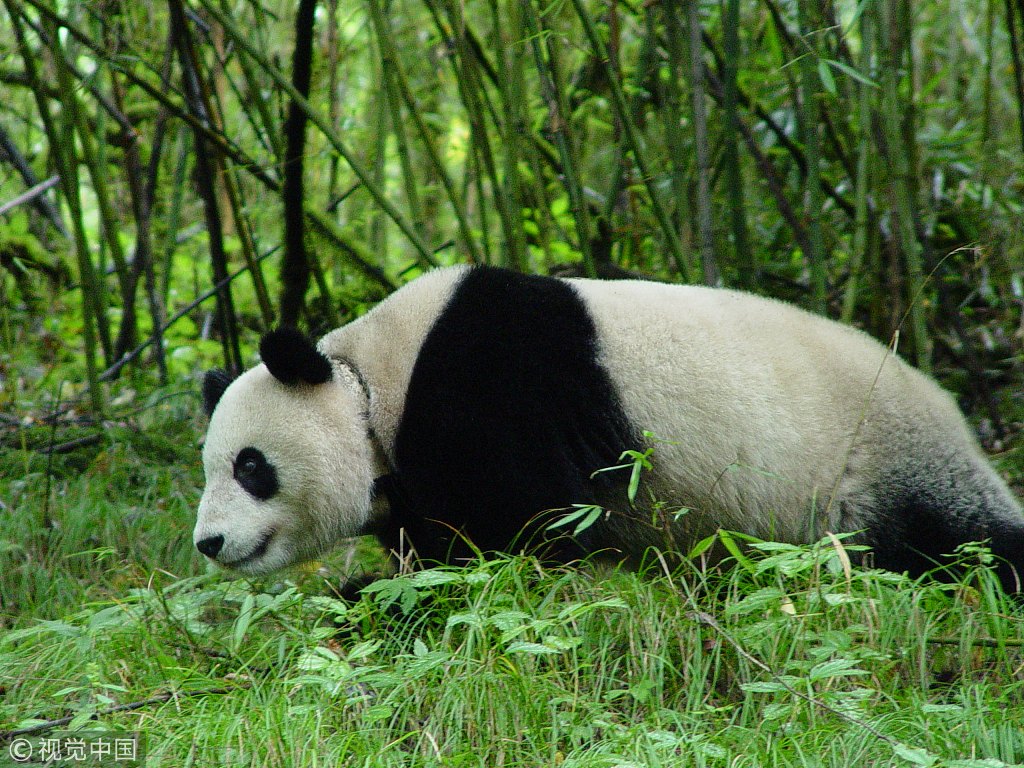 Giant panda Xiang Xiang, whose name means "lucky" or "auspicious" in Chinese, was walking across brushes to expel the "intruders", which were actually his keepers, out of his terriroty in Oct. 2005.

The long journey of setting free captive pandas began with Xiang Xiang, a male panda born in 2001. The two-year-old panda was the best choice when scientists were selecting suitable bears in captivity for the wild training project at the beginning of 2003.

Before setting their paws into the wild, the captive pandas must undertake a two-stage training which typically lasts for two years.

Xiang Xiang was separated from other pandas and initially lived alone in a 2.7-hectare semi-wild training base. The main goal was to break his strong reliance on bamboo supplies from keepers.

He turned out to be well adapted to the new environment thanks to his outstanding physical condition and his capability of learning quickly.

Giant pandas are solitary creatures. Xiang Xiang’s sense of defending his territory was tested in the next stage of training. When Xiang Xiang attacked the keepers once they intruded into his territory after being moved to a much larger training ground for a year, conservationists believed the time for freeing the five-year-old bear had come.

With high expectations along with anxiety for his unknown future, Xiang Xiang was released in April 2006 into Sichuan’s Wolong National Nature Reserve, the earliest and largest panda reserve in China.

Bad news came back-to-back during the first two months of 2007. In early January, researchers lost track of Xiang Xiang. The signals from the tracking device attached to his neck vanished. In late February, researchers discovered his body lying on snow-covered ground in a bamboo forest. Scientific examination determined that Xiang Xiang fell to his death from a tree after he was injured in a fierce fight against a competitor over food and territory.

The death of Xiang Xiang was a huge blow to China’s panda conservationists, as he was the first and only captive-born panda in the wild at that time.

Xiang Xiang’s breeders admitted that the fighting for territory between wild male adults could be fatal and they underestimated that risk. For that reason, they gave scant attention to building up Xiang Xiang’s attack and defense skills during his survival training. 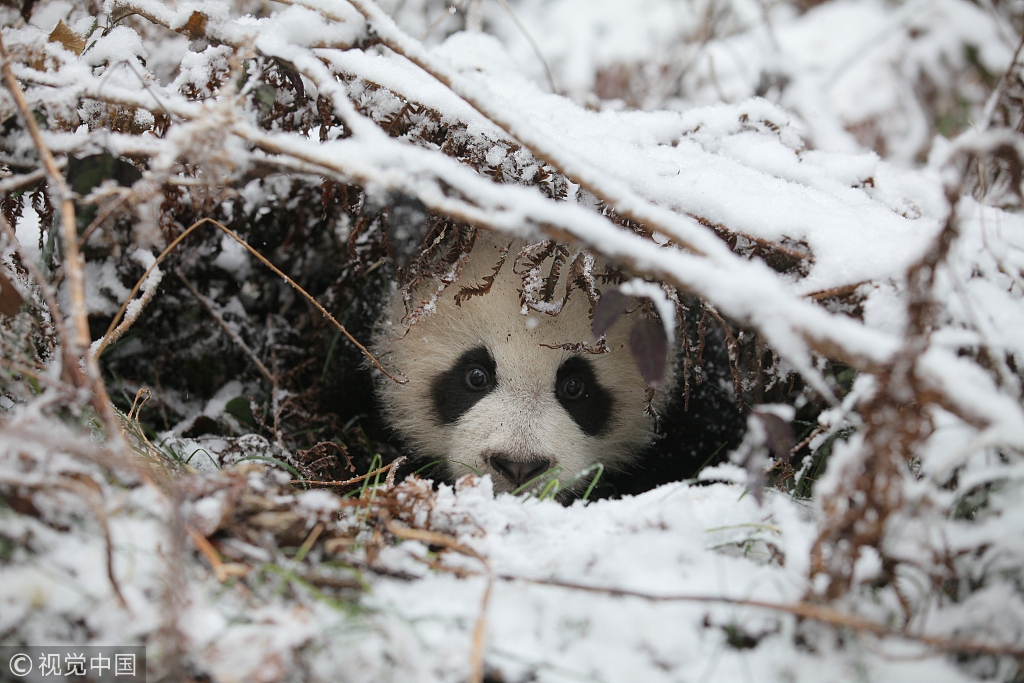 A file photo shows Tao Tao in an attempt to hide himself in a snowy day in 2010 at the Liziping Wild Training Base.

As the captive panda population ballooned in the wild training bases, the training model also evolved.

In October 2012, a two-year-old male panda Tao Tao cautiously walked out of his crate and ran into the forest in Liziping Nature Reserve, beginning an uncertain adventure that Xiang Xiang didn’t survive.

Tao Tao resurfaced on scientists’ radar at the end of last year when he was caught in a trap set up by biologists to recapture released animals for health checks.

A thorough examination showed that the 165 kilogram bear was in good condition, and proved the new survival training model was workable. The model had been modified substantially following Xiang Xiang’s unexpected death.

Tao Tao was the first panda cub born in the wild training base and trained with the new method. Tao Tao mastered almost all survival skills crucial for his independence from observing and modeling behaviors of his mother Cao Cao, which included foraging and avoiding predators. Human activities in the environment were minimized as much as possible during the training. 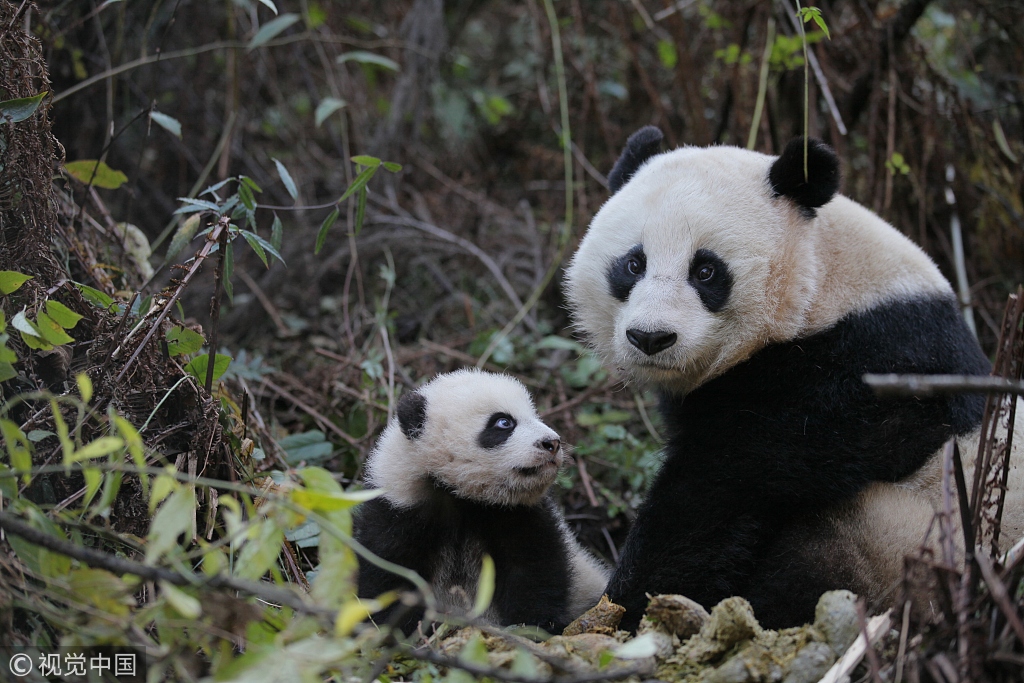 A file photo shows Tao Tao sitting closely to his mother Cao Cao at the Liziping Wild Training Base in 2010.

The little interaction with humans was a gift for Tao Tao, which helped cultivate his high alertness to any unfamiliar noises, said Huang Yan, vice-chief engineer of China Conservation and Research Center for Giant Panda, and also the main advocate of the mother-led model. “Tao Tao is more like wild pandas. Sometimes he would be scared away due to the sudden sound we made approaching him,” said Huang. “It’s rare to see in captive pandas, but a life-saving reaction while living in the wild.”

The landmark progress made by Tao Tao didn’t come out of thin air. The rescue of a wild panda marked a turning point in the efforts of setting pandas free.

In 2009, a farmer came across a five-year-old female panda collapsed at the roadside in Sichuan’s Luding County. The panda, later named Lu Xin, was in critical condition because of serious gastrointestinal problems.

Lu Xin recovered soon and was released a month later into Liziping Nature Reserve, the second national release base. It is far away from where she grew up.

Lu Xin settled down in her second home and became a mother three years later. In 2014, Lu Xin and her cub were captured by a wildlife monitoring camera. Both were looking great.

There are three key benchmarks to gauge whether a panda’s return to the wild is complete. The first is to obtain food and survive for at least one year; the next is to avoid other wild pandas and build its own territory; and the third is to mate and have a baby, said Qi Dunwu, a researcher at the Chengdu Research Base of Giant Panda Breeding.

Lu Xin and her cub showed scientists that a mother is the best teacher for survival, and rekindled hope for resuming the wilderness training and release program, which was halted after Xiang Xiang’s death.

After Tao Tao, there were eight more pandas set free in the wild. They were all trained only by their mothers.  Seven of them survived.

As her son Tao Tao set records in the natural reserve, Cao Cao stayed at Wolong’s Hetaoping Research and Conservation Center for the Giant Panda, and helped scientists make breakthroughs in panda breeding.

The 15-year-old mother gave birth to a male cub at the Hetaoping base in August 2017.

The baby was extraordinary. Its birth marked the first time a captive panda was released into the wild and successfully mated, which could expand the vitality and diversity of the gene pool of the wild panda population, said experts. 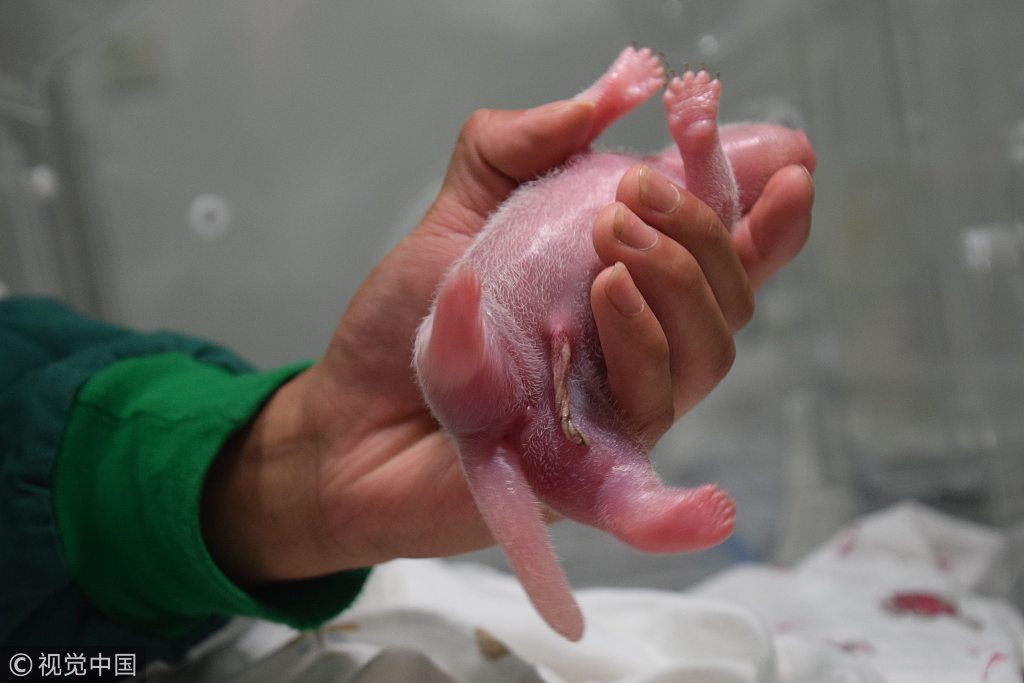 A photo taken on July 31, 2017 shows the the world's first baby panda to be born to both captive and wild parents.

Efforts of breeding and releasing pandas also offer meaningful insights for other species. A paper published in the American journal Conservation Biology in 2015 stated that pandas serve as an “umbrella” to protect dozens of other spices coexisting with the black-and-white bears within their range of activities.

And the lessons learned from pandas’ captive-breeding, survival training and wild release will also provide clues to soothe the path back to the native habits for other endangered animals like the South China tiger and crested ibis.

Despite the enormous efforts to expand the size of panda’s remaining native habitat and the rising population, the findings of field surveys are still concerning. Gu Xiaodong, a wildlife resources protection official of Sichuan’s forestry authorities, warned that fragmented habitat, habitat loss due to human activity, and scant diversity in the gene pool pose serious threats to the creatures.

“We have spent over 50 years to pull pandas from the brink of being endangered, and probably we will spend another 50 years or even more to help them really return to nature, which is a lifelong mission of Chinese panda workers,” said Zhang Zhihe, director of the Chengdu Panda Base.