CULTURE Going with the floe: Scientists to set up Arctic ice camp

Going with the floe: Scientists to set up Arctic ice camp 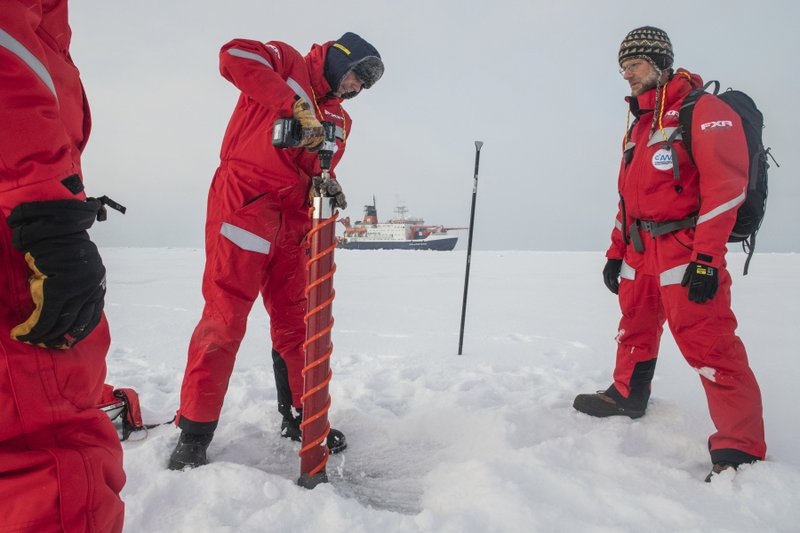 This image provided by the Alfred-Wegener-Institut shows Gunnar Spreen, left, and Matthew Shupe, right, as they exam a potential ice floe for the MOSAiC (Multidisciplinary drifting Observatory for the Study of Arctic Climate) in the Arctic Sea on Sept. 30, 2019. (Photo: AP)

Scientists have chosen an ice floe on which to begin setting up a research camp for a year-long international expedition to study the Arctic, Germany’s Alfred Wegener Institute said Friday.

After several days of searching, researchers found a suitable floe measuring about 2.5 kilometers by 3.5 kilometers (1.5 miles by 2.2 miles) in the Arctic Sea north of Russia that will serve as a base for the mission, the institute said.

“It may not be the perfect floe, but it’s the best one in this part of the Arctic, and offers better working conditions than we could have expected after a warm Arctic summer,” it quoted mission leader Markus Rex as saying.

Choosing the right floe is crucial to the plan of allowing the expedition vessel RV Polarstern to drift with the current throughout winter, when an icebreaker would not normally be able to penetrate so deeply into the central Arctic.

“We’ll have to wait and see if it’s also stable enough to withstand the autumnal storms that are now brewing,” Rex said, adding that the team is “prepared for all scenarios.”

The 140 million-euro ($158 million) expedition involves hundreds of scientists from 19 countries, including Germany, the United States, Russia, Britain, France and China. Their aim is to collect data from the remote and inhospitable north to improve the scientific models that underpin their understanding of the Arctic and climate change.