CULTURE Going with the flow at China's first national park

Going with the flow at China's first national park 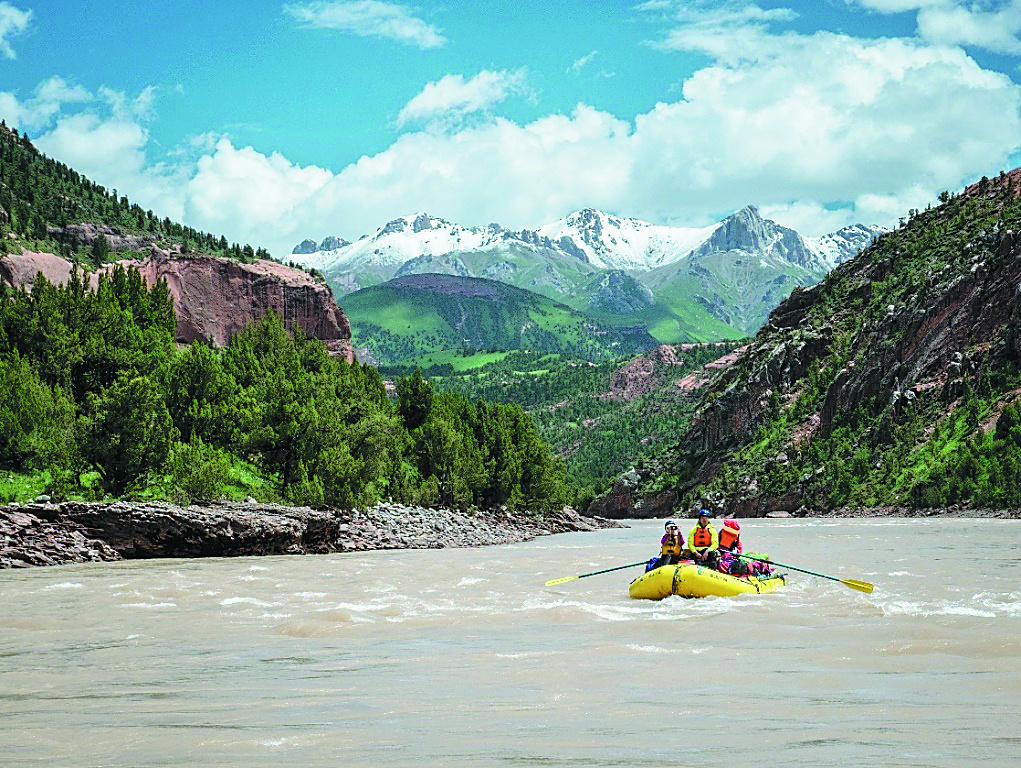 Rafting down the Lancang River in Qinghai province is a popular pursuit for intrepid explorers. (Photo: Xinhua)

XINING－Tang Jianzhong can read the river like a book.

Over a decade after settling in China's first national park in northwestern Qinghai province, the 52-year-old sailor claims to have found wisdom and his true self from the white waters rippling against his rafts.

As the song goes, summertime and the living is easy. However, here in Namse, a small town by the banks of the upper reaches of the Lancang River in Qinghai's Yushu Tibetan autonomous prefecture, summer days are written in the water as the weather quickly turns chilly when August ends.

Sanjiangyuan Park－which translates as "the source of three rivers" and is scheduled to be officially established this year－is an ideal place for white-water rafting.

Tang has been running tides for 16 years. On his first car ride to Namse, the icy and bumpy road reminded him of "the intrepid waters filled with obstacles at every twist and turn".

From June to August, the region's evanescent summer is the only window of time to go on the river, and Tang is kept busy with tourists and explorers keen to conquer its waters. On an eight-day expedition, adventurers spend the day rafting and then sleep under the stars by the shallow waters.

During summer, water rises and the river runs more rapidly, making it more dangerous. "It's our protocol to make sure everything is good to go before we set sail. We call it reading the water," explained Tang.

The phrase, "still waters run deep" is perfectly apt for Tang. Beneath his tough-guy exterior, lies a humble, pensive soul.

Working as a mountain guide in the 1990s, Tang began rafting in 2004. With his great passion and years of experience of traversing jungles, he soon mastered the sport, becoming the only Chinese captain to successfully raft from Lee's Ferry to Diamond Creek at the Grand Canyon in the United States.

"In spite of speaking no English, Tang manages to end every trip as everyone's favorite guide and best friend," according to the website of the rafting agency he works for.

Outside of his job, Tang reaches out to local residents of the park.

Tashi is one of his favorite students. Born and raised by the Lancang (known as the Mekong outside of China), Tashi spent his childhood floating down the river on abandoned tires.

After learning the tricks of the trade from Tang, Tashi became his own boss by setting up a rafting agency in Namse. "I never thought that I could turn my childhood interest into a career," he said.

"With community tourism based on sight-seeing and rafting, people can learn more about the national park that we call home."

On the unpopulated land that Tang passes by on every expedition, he always spots fresh footprints of rare animals, which makes him feel even closer to nature.

"We see a different world on the water. Rafting exposes you to nothing but the wilderness," he said.

According to Plato, water takes the shape of an icosahedron, a 20-sided, three-dimensional shape. After years of battling the rapids, Tang said that water can never be defined by any form.

The raft can sometimes be violently shaken and pushed to its very limits, as if the water is trying to consume it, but the vessel can also flow in harmony with the river. "The water is a mystery," Tang pondered.

"After all the gentle splashes of paddles and the extreme currents, you always make it to land. I guess that is what life is all about."