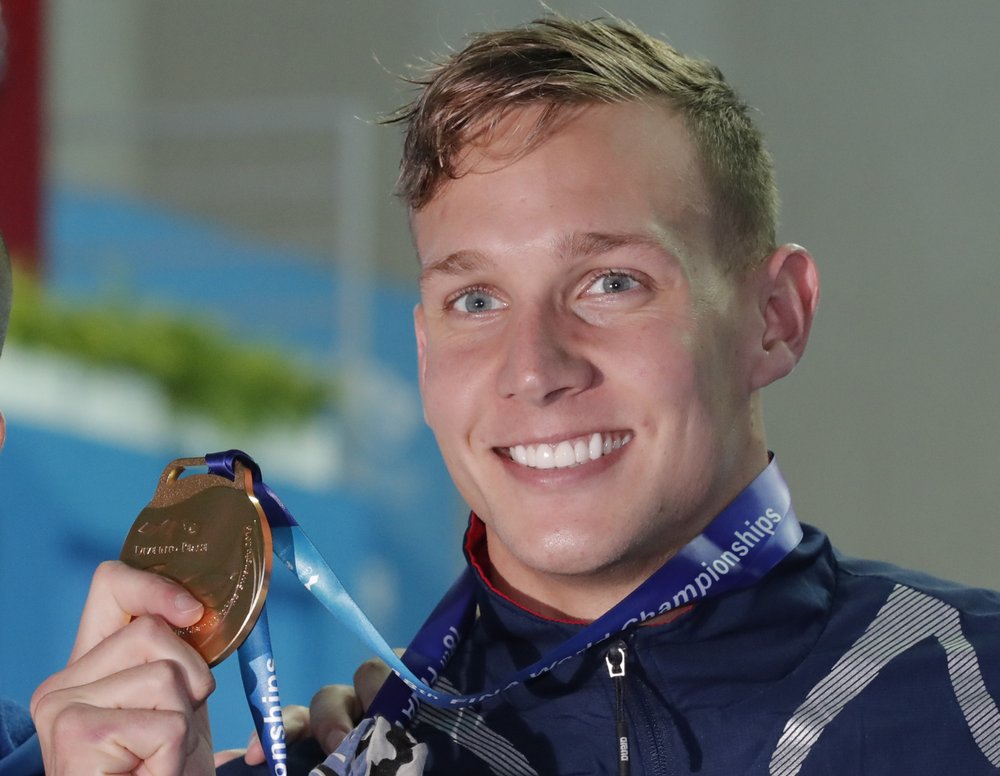 Caeleb Dressel made history — again — at the world swimming championships.

The American won three gold medals in a span of about two hours Saturday night, duplicating his feat from two years ago in Budapest, Hungary.

Dressel has six golds and seven medals overall with one night remaining in the meet. He tied Michael Phelps’ record of seven medals — all gold — at a single worlds in 2017.

Manuel dueled with Australian anchor Bronte Campbell over the final 50. The American clocked 52 seconds to Campbell’s 52.36 to keep Dressel golden.

“I had a lot of help on that relay,” he said, pointing out that his 100 split of 47.34 would only have been good enough for bronze in the individual event. “Every time I do a race I always look for the bad.”

There wasn’t much to criticize on this night.

Dressel opened the evening with a win in the 50 free to complete a 50-100 free sweep. He touched in 21.04 seconds, bettering the championship record of 21.08 set by Brazil’s Cesar Cielo at the 2009 worlds in Rome during the height of the rubber suit era.

Bruno Fratus of Brazil and Kristian Gkolomeev of Greece tied for silver in 21.45.

Coming back just 34 minutes later, Dressel won the 100 fly in 49.66 a night after breaking Phelps’ world record in the semifinals.

On his three trips to the podium, Dressel tied a bandanna belonging to his late high school mentor onto the ribbon holding his medal. He stood with his right hand over his heart for the US anthem.

“She loved me and I loved her, it’s as simple as that,” Dressel said, referring to math teacher Claire McCool, who died in December 2017. “That bandanna is just the last piece I have of her. I just wanted to bring her along for the journey.”

Dressel wraps up his meet Sunday in the 4x100 medley relay.

“I’ll be ready to swim one tomorrow and swim one fast,” he said.

Katie Ledecky won her first gold medal in her final event of an illness-plagued worlds, rallying on the last lap to claim the 800 free.

“Simona was having a great race and pulled up right next to me,” Ledecky said. “When she did that I kind of felt like I could stick with her and rely on my speed, so just tried to stay calm, relaxed from the 500 to the 750.”

That’s when Ledecky turned on the jets and completed the last lap in 29.19 seconds to Quadarella’s 30.76.

“Just put my legs into it and got my hand to the wall,” she said.

Ariarne Titmus of Australia earned bronze in 8:15.70. Titmus stunned Ledecky to win the 400 free on the first night before the American got sick and withdrew from the 200 free preliminaries and 1,500 final.

She set the world record of 2:03.55 in Friday’s semifinals and was on pace to lower it again before fading on the last lap.

“I really went for it on the first hundred,” Smith said. “It hurt really bad going home, but I’m really glad that I gave it my all two nights in a row.”

Smith’s winning margin of 2.57 seconds over Kaylee McKeown of Australia was the biggest gap between first and second since 1991. Kylie Masse of Canada took bronze.

Sweden’s Sarah Sjostrom won the 50 butterfly in 25.02 for her first gold and fourth medal overall.