CULTURE Golden Globes another sign of value of Asian inclusion

Golden Globes another sign of value of Asian inclusion

The Golden Globe Awards is set to feel like a major evolution from its 2015 broadcast, when comedian Margaret Cho's appearance as a Democratic People's Republic of Korea (DPRK) film journalist who spoke in heavily accented English was slammed by some as awkward and racist. Cho was the only Asian on stage the entire evening. Sunday's show will have a decidedly different feel, with Sandra Oh as co-host and the rom-com “Crazy Rich Asians” up for two nominations. The recognition feels like a seismic shift for Asians and Asian-Americans in Hollywood after decades of struggling to get starring roles while dealing with stereotypes and “whitewashing.”

The last time the Globes honored an all-Asian film at that level was the 1961 musical “Flower Drum Song,” which was nominated in the same categories as “Crazy Rich Asians”: best comedy or musical and best performance by an actress in a musical or comedy. The Globes has doled out nearly 1,000 film and TV acting trophies in its 76-year history, including for now defunct categories like best juvenile performance and “new star of the year.” Of all those wins, 10 have gone to performers of Asian descent, including Oh.

The Hollywood Foreign Press Association announced that Oh and Andy Samberg will share emcee duties for the ceremony. Oh, who earned a TV supporting actress Globe in 2006 for “Grey's Anatomy,” will be the Globes' first ever Asian – not to mention Canadian – host. She is also up for best actress in a television drama for “Killing Eve.” She, Constance Wu and Darren Criss, who is half-Filipino, are the Asian acting nominees this year.

Wu, nominated for “Crazy Rich Asians,” believes the film won Globes recognition in part because so many moviegoers turned it into a blockbuster. 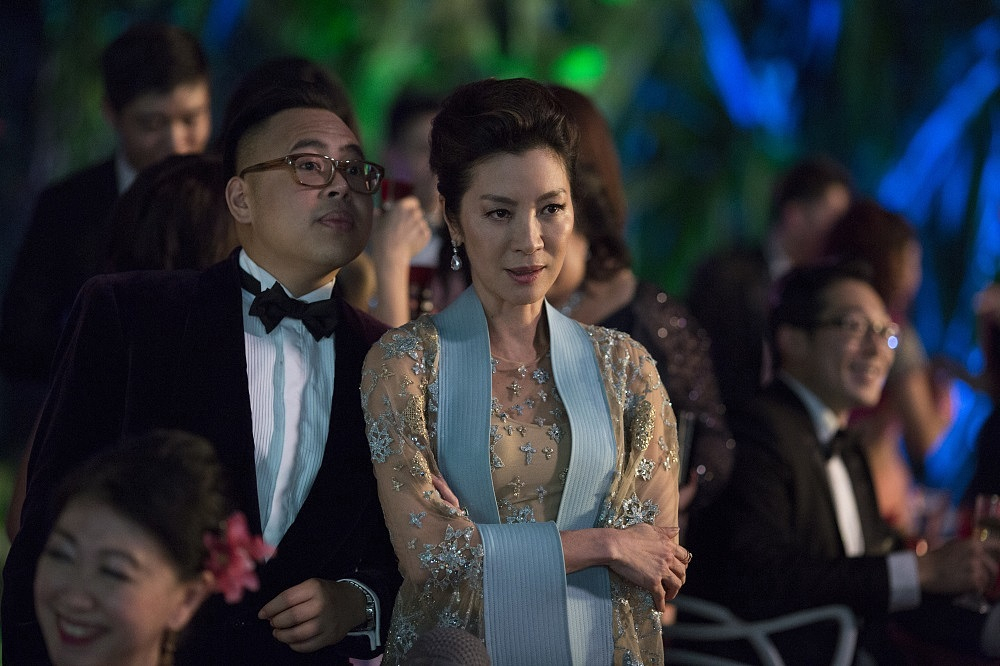 A still from the film "Crazy Rich Asians" (Photo: VCG)

“The fact that Hollywood made this story and people showed up for this story and now it's being recognized by the Hollywood Foreign Press – that shows our country values our story and wants to see more of it,” Wu told The Associated Press shortly after finding out she was nominated.

The last time an Asian woman was nominated in Wu's category was 1974 when Yvonne Elliman was nominated for “Jesus Christ Superstar.” Before her, only two other Asian actresses were nominated, including Miyoshi Umeki, the first Asian entertainer to win an acting Oscar.

Chris Tashima, a member of the Academy Asians Action Committee, an informal group of Asian and Pacific Islander members of the Academy of Motion Picture Arts and Sciences, believes the recognition has made more people aware that the success of “Crazy Rich Asians” wasn't a fluke.

“Just to be nominated, to establish that sort of foothold, everything is proving what we've always said: ‘Give us a shot,'” Tashima said. “We can be commercial. It doesn't have to be a white, male lead all the time.”

Ellen Huang, senior director of diversity for the SAG-AFTRA, said it's clear that there's a market value for making movies and shows that are diverse and well-crafted.

“While the industry is moving in the right direction, there is room for improvement – particularly in the casting of leading roles,” Huang said in a statement.

Oh's hosting gig for the Globes seems almost karmic. She, Tashima and other Asian Academy members met with the Academy about jokes host Chris Rock told at the 2016 Oscars at the expense of Asians. For one bit, he paraded three Asian children as the accountants who tally the ballots, relying on the stereotype that Asians are good at math. Tashima remembers how Oh spoke passionately about it.

“She just wanted to hit home that the response to it was completely emotional, how it hit her personally,” he said.

The 58-year-old actor and director, who won an Oscar in 1998 for best live action short, said another sign of a page turning is what he's hearing from fellow actors and writers.

“Everyone now is like ‘Oh, where's that Asian project you had that we rejected? Let's read that script,'” Tashima said.

Does this mean Hollywood will finally leave behind cringe-worthy caricatures like exchange student Long Duk Dong from “Sixteen Candles” or whitewashed casting like Scarlett Johansson in the Japan-set “Ghost in the Shell?” Not so fast, Tashima says.

“Those are still gonna happen because every white, male filmmaker that hasn't specifically benefited or been touched by what I'm talking about ... they're still clueless,” Tashima said. “They're still gonna do what they think they should do.”

Actor Derek Mio, who recently snagged the lead in the second season of the AMC series “The Terror,” believes more Asian-centric projects are getting greenlit. He credits more showrunners and people behind the camera for putting “old ways of thinking” into check.

“It was just only a matter of time where Asians would get their time, like Latinos and African-Americans as well,” Mio said.

In “The Terror,” the Japanese-American actor will play a young man looking into a series of bizarre deaths in a Japanese-American community during World War II. One of the creators and executive producers is Alexander Woo, who is Chinese-American, and the cast is primarily Asian, including “Star Trek” veteran George Takei who will serve as a consultant.

Mio recognizes that older generations didn't have the same opportunities he does.

“They were all kind of chipping away at the machine to kind of make way for the younger generations to kind of break through that,” he said. “Now we're having this watershed moment with more authentic storytelling.”