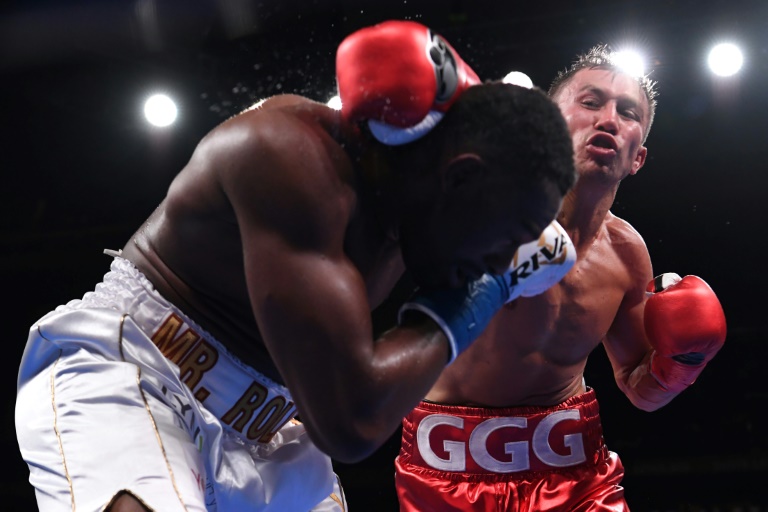 Kazakhstan's Gennady Golovkin knocked out Canadian Steve Rolls in the fourth round of their super middleweight fight at Madison Square Garden on June 8, 2019.  (Photo: AFP)

Former unified middleweight champion Gennady Golovkin turned back the clock on Saturday night with a sensational fourth-round knockout of Steve Rolls in their super middleweight fight at Madison Square Garden.

The 37-year-old Kazakhstan fighter hit Rolls with a short left that sent the Canadian crumbling face first to the canvas with one minute to go in the fourth in front of a crowd of 12,357.

"I feel great, I feel like a new baby," said Golovkin.

Golovkin, who was fighting for the first time in nine months and coming off the first loss of his career, chose to fight the heavy underdog Rolls as he jockeys for a third fight against champion Saul 'Canelo' Alvarez.

But in the back of everyone's mind was last week's shocking heavyweight upset that saw unheralded and overweight Andy Ruiz steal three titles by dismantling champion Anthony Joshua.

Golovkin made sure there was no repeat of that, using the first three rounds of the 164-pound fight to figure out how to break down the undefeated Rolls.

Golovkin sized him up by winning a close first round. In the second, Rolls (10-1) hit him with a left hook and a left jab that snapped Golovkin's head back.

But Golovkin started to see cracks in Rolls' defence in the third round. He stayed patient -- even holding off and not throwing punches despite getting Rolls in a vulnerable position. Golovkin's the type of boxer who can put those moments away in his muscle memory bank for use later in the fight.

And that's just what he did to finish off the Canadian in the fourth, first landing a chopping left hand to the top of the head that hurt Rolls. The wobbly-kneed Rolls staggered backwards and then tried unsuccessfully to get Golovkin in a clinch.

Golovkin worked his way out of it and then slammed a short left from a southpaw stance into the face of Rolls for the knockout.

Asked who he wanted to fight next, Golovkin didn't hesitate, "Everybody knows. I am ready for Canelo. Just bring him, ask him. If you want a big drama show, tell him."

He split with long-time trainer Abel Sanchez and signed a lucrative six-fight deal with US streaming company DAZN which may well smooth the way to a third bout with Alvarez, another DAZN fighter.

This was his first fight with new trainer Johnathon Banks and he hopes also a new beginning for his career.