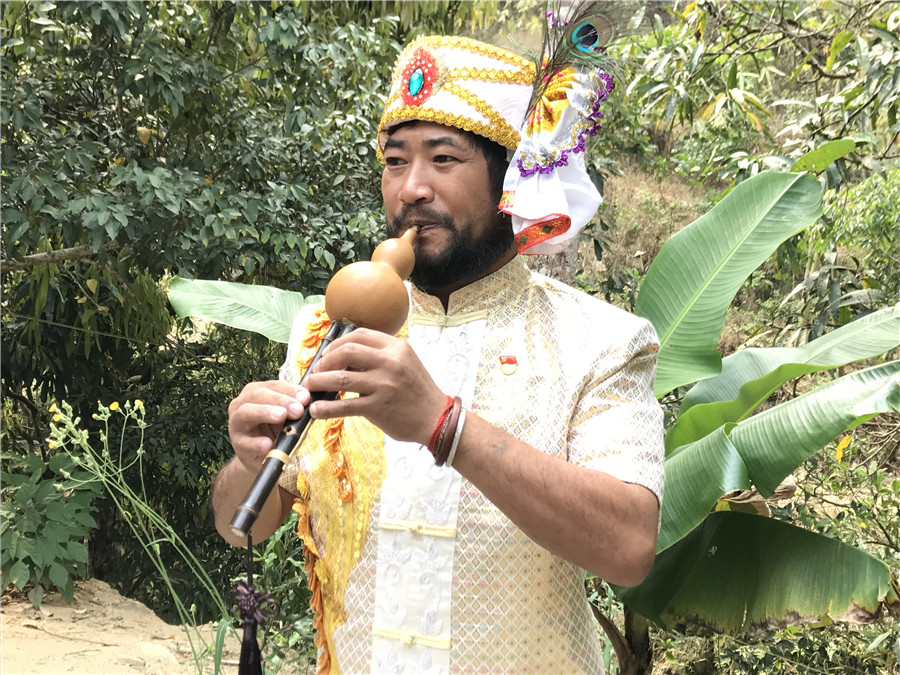 For two years, 39-year-old Gen Congguo has been dedicated to the planting of gourds - an essential material in making a cucurbit flute - in Yunnan province's Lianghe county, his hometown, where the flute is believed to have originated.

"The soil here grows the best gourds. Besides, it's my uncle's will to revitalize the instrument at its birthplace," said Gen, who returned to Banggai village in 2014, six years after his uncle, flute master Gen Dequan, died in Kunming, where the two ran a studio and made cucurbit flutes, which are popular ethnic musical instruments in China.

Gen is the only inheritor of the craft of master Gen Dequan. The senior Gen not only excelled in making and playing the flutes, but also composed many catchy household tunes featuring the instrument.

Three years after the younger Gen returned to Banggai, in 2017, he realized that the flute, also known as the hulusi, was of little value in its cradle in Lianghe, a national-level poverty-stricken county, where the average disposable annual income per capita is no more than 3,200 yuan ($476).

The flute tradition did not seem to help, despite its popularity in bigger cities like Kunming, Beijing and Shanghai, and being selected by some primary schools as an instrument to be mastered.

Lianghe is populated with a variety of ethnic groups including Dai, Lisu and Achang. It is a narrow strip of land tucked between the better-known Tengchong and Yingjiang counties. The underdeveloped infrastructure and mountain lifestyle embraced by local ethnic groups for centuries, and its few commercial exchanges, or even communication with the outside world, have been major impediments to economic growth.

Today, growing and processing tobacco remains one of the pillar industries for the farm-dominated county. However, Gen is confident that the flutes, which he sells for 360 yuan to 1,980 yuan each, with every part handmade, can be as helpful as tobacco for lifting his fellow villagers out of poverty. That is why he has dedicated himself to planting gourds.

Not only has Gen doubled the productivity of the gourds to 60,000 per hectare, but he has also found ways to use gourds that are unsuitable for making flutes - those with bug bites or poor shapes, for example. He makes them into tea filters or lamp covers. It is estimated that more than one-third of gourds grown naturally cannot be used to make the wind "chest" for the flute.

Gen estimated that farmers can profit between 100,000 and 120,000 yuan per hectare by growing gourds, after taking all sales of gourd products into account.

Every year, he sells about 1,000 cucurbit flutes under the brand founded by his uncle, which he said was only one-third of the orders to his studio.

The county government has also been trying to entice more flute makers to the region to create a more diverse industry, including tourism and training in flute playing. The former residence of Gen's family has been renovated into a sightseeing spot open to public.

There are several million cucurbit flute players across China, both professional and amateur, because the instruments are easy to carry and learn, though they are difficult to perfect.

Gen can finish some tunes without changing his breath, and the sound from his flute is pure, smooth and mellow like a clarinet.