A solemn and private traditional ceremony, sky burials have been practiced in Southwest China's Tibet Autonomous Region for more than 1,000 years. The funeral practice sees burial masters carry the dead to the top of a mountain, where they then separate the corpse into pieces which are then offered to birds or other scavenging animals. This type of burial is practiced in many autonomous regions in China, including Tibet and the Inner Mongolia autonomous regions and autonomous prefectures in Sichuan and Qinghai. 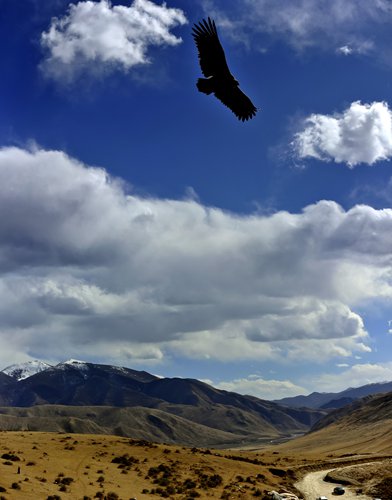 Considering the private nature of funerals, sky burials continue to be shrouded in mystery despite having piqued the curiosity of people all over the world.

According to statistics from travel website tibetcn.com, the number of travelers to Tibet soared from 2.15 million to more than 20 million from 2006 to 2014. The sharp rise has helped raise Tibetan culture's profile worldwide, which in turn has caused curious tourists to seek out any chance to see a sky burial for themselves. Though there are laws and regulations that ban photography and recording of sky burials, some people have managed to secretly record some of the ceremonies and then circulate the videos online.

"Photos and videos are regarded as being disrespectful to the tradition and the dead," Wang Yiwen, the secretary general of the Tibetan Association of Collectors and a resident of Tibet for more than a decade, told the Global Times.

The Tibetan government introduced a series of regulations to protect sky burials in 2005, which include provisions forbidding the use of any photographic equipment to record a sky burial ceremony.

Additionally, in 2015, the 10th People's Congress in Tibet passed a law aimed at preserving and regulating sky burials - the first law of its kind in China.

According to Samdrup, the director of the Tibet Autonomous Region Working Committee, legislation on sky burial reflects the government's respect and the protective attitude for traditional Tibetan customs.

While the influx of culture from big cities like Beijing and Shanghai have had a huge impact on the region, "this tradition has not been replaced nor has it disappeared," Sala Tsewang Rigzin, an expert in Tibetan folk culture and the chairman of the Tibetan Culture Group, told the Global Times.

"On the contrary, it is being protected by the local government."

"There were no roads for trucks before. Previously, bodies had to be carried up to the platforms," Wang told the Global Times.

"Now roads have been built and it is much safer and more efficient to transport bodies from monasteries up to the mountaintop where the sky burial platforms are located."

Additionally, fences surrounding the platforms, rooms for mourners and storage areas for bodies awaiting sky burials are also being constructed.

As to some media outlets concerns that vultures are being overwhelmed by the number of corpses and "leftovers" are becoming an environmental hazard, Sala Tsewang Rigzin insisted that this is not the case. "Most burial sites are quickly cleaned by the vultures, but if they are not, the masters burn the remains."

According to data from Tibet's Department of Civil Affairs, there are 1,093 burial masters working in the region.

At more well-known sky burial sites, like the Drigung Thil Monastery, the role of burial master is a full-time profession that is usually filled by monks appointed by masters from the Nyingma school of Tibetan Buddhism.

Outside these larger temples, most burial masters are not monks but ordinary laymen.

In more rural areas where there are no professional burial masters, some villagers will ask someone who has a good reputation to help them with the sky burial ceremony.

"A sky burial is the greatest gift one can make to other living creatures," Wang noted.

"It is far more environment-friendly than cremation. I really appreciate this clever and natural method of sending off the dead that the Tibetans invented," he said.