A singer from Northwest China's Xinjiang Uyghur Autonomous Region was declared the winner of one of the most popular Chinese talent shows in early February for the first time in 15 years, attributing her success to the Xinjiang regional government's efforts to protect and cultivate excellent musicians. 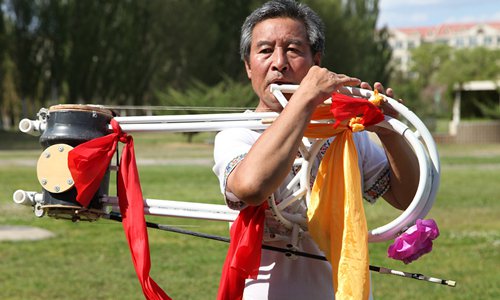 Qiaolibai Yunusi, a teacher by profession from Hami Prefecture, was well received by the audience at Xingguang Dadao for her performance of Muqam, a traditional type of melody in Xinjiang.

Xinjiang Muqam consists of a variety of traditional practices, including songs, dance and poetry. Influenced by ancient Persian and Arabic music, it is    regarded as an encyclopedia of Uyghur history and life. UNESCO placed Xinjiang Muqam on the Representative List of the Intangible Cultural Heritage of Humanity in 2008.

"Wherever I go, I will sing Xinjiang songs, reminding people that Xinjiang is still the 'hometown of dancing and singing,'" Yunusi told the Global Times on Thursday.

She attributed her success mostly to the Xinjiang regional government's efforts to protect and cultivate excellent musicians.

"The regional government sent outstanding music students to national music colleges, where they can receive a better education," said Yunusi.

Traditional Xinjiang music performers have been active on all kinds of stages in recent years, including talent shows, galas and variety shows, and their singing has touched many people.

"Xinjiang's traditional music is developing fast with help from many famed Han musicians, and cultural authorities have organized many activities to help such an art reach a wider audience," a musician from Xinjiang told the Global Times on condition of anonymity.

Yunusi noted that after a terrorist attack in 2009, music in Xinjiang became silent for a time due to rampant religious extremism. However, the regional government initiated many cultural policies to change the situation. After that, beautiful music began to spread in Xinjiang again.

In 2010, the regional government passed a law to pinpoint the responsibility of government on all levels regarding the protection of Muqam.

Muqam was on the verge of extinction when the People's Republic of China was founded in 1949. The central and local governments organized manpower and material resources to rescue and research the art form, China Radio International (CRI) reported in October 2018. It reported that thanks to the governments' efforts, this art form was preserved.

Goksan Goktas, a journalist from Daily Sabah, a Turkish newspaper, hailed the Xinjiang regional government's effort to protect the art in an interview with the CRI, after watching a Muqam performance. He said the Chinese government's support of art is laudable, and set a model for the world.

In 1951 and in 1954, the central government made recordings of the music of the Twelve Muqams to rescue the Muqam art, according to a white paper issued by China's State Council in November 2018.

Aside from government support, many fans of traditional Xinjiang music also devoted themselves to the protection of the art form.

"In 2018, I recorded the performance and profile of 868 traditional music performers in some Xinjiang prefectures and cities, and I am going to make a documentary about it to promote such culture," Wang told the Global Times on Thursday.

According to Yunusi, many Uyghurs in Xinjiang teach other ethnic minority residents traditional Xinjiang music and dance when they danced in squares. "Although people don't understand the language [of the lyrics], they can appreciate the melody and dance," she said.

Yunusi mentioned that the art form has became so popular that she even saw people in Xiamen, East China's Fujian Province dance to traditional Xinjiang music.

Traditional Xinjiang music will survive only if we keep perfecting it by putting it on stage, and introduce it to the modern world. The art world will reserve a place for Xinjiang music, said Mikhrai.