Nancy Zhou from the United States won the first place last night after intensive performances by 27 young violinists from 11 countries and regions in the past four weeks during the second Shanghai Isaac Stern International Violin Competition. 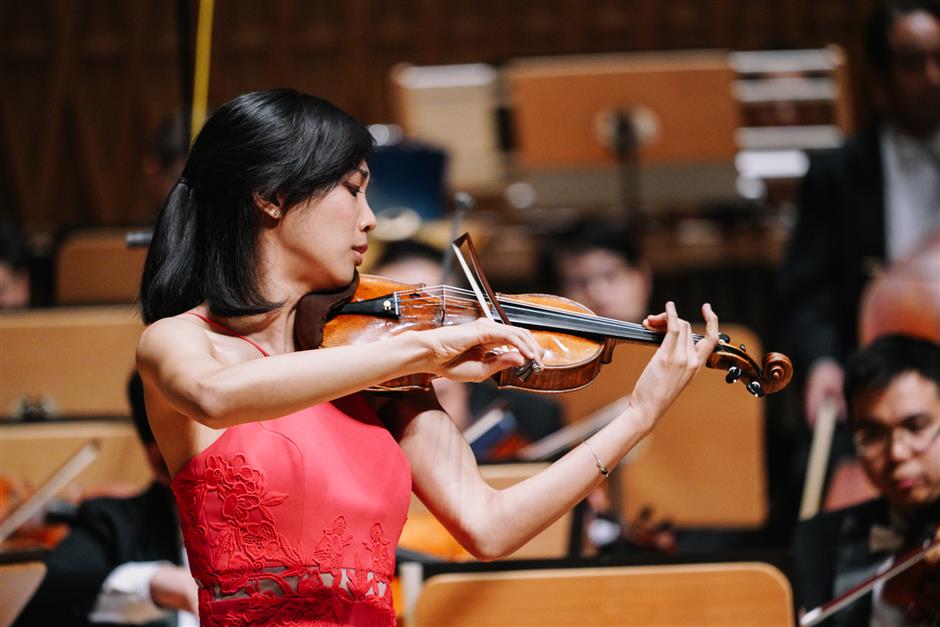 In the final, all the six female contestants from five countries including China, America, Ukraine, Canada and Czech Republic, played a concerto with the Shanghai Symphony Orchestra conducted by Michael Stern. They were also required to perform a Chinese concerto La joie de la souffrance (literally the joy of suffering) which was composed by Chen Qigang.

“Both French elements and Chinese elements can be found in the piece. There is a specific story that Chen says with the music. It is touching, beautiful, heartbreaking and energetic. Some contestants tell their own story through the piece,” said David Stern, co-chairman of the jury committee.

Nancy Zhou, born in 1993 in Texas, USA, was awarded first place, taking home the grand prize of $100,000, the highest single cash prize for any international violin competition. Her splendid performance of P.I. Tchaikovsky’s Violin Concerto in D major, Op.35 and her excellent interpretation of the Chinese concerto left the jury and audiences in awe.

Graduating from Harvard University, Zhou gave her orchestral debut at the age of nine. She has achieved a large number of internationally recognized awards, including the laureate of the 2012 Queen Elisabeth Competition and 2015 Jean Sibelius Violin Competition. Most recently, she was the first prize winner of the 2018 International Music Competition Harbin.

“The competition is quite challenging, which is one of the reasons that I chose to participate. The greatest gain from the competition is playing the music (The joy of suffering) composed by Chen Qigang. I weaved my personal experience into the performance.

Joy and suffering are usually deemed as two opposite things. But for Chen, he thinks that they are in the relationship of hand in hand. Life wouldn’t be life without one or the other. I think it is really profound,” said Zhou.

In addition to the cash prize, the first prize winner is also granted the chance to share a stage with the Dutch conductor and violinist Jaap van Zweden and Shanghai Symphony Orchestra on April 17 next year.

The second prize of $50,000 went to Olga Šroubková of Czech Republic, who also won the Best Chinese Work Performance award of $10,000. Diana Tishchenko of Ukraine was awarded the third prize of $25,000.

“I am happy to see that the expressive level of the Chinese violinists has become much stronger since two years ago. They have gone a step away from simply imitating famous violinists to finding their own voice,” said Stern. “Apart from concerts and money, we will also offer the winners advice on their career.”

To award those who have made an outstanding contribution to the understanding of humanity through the medium of music, the competition also presented a special prize--Issac Stern Human Spirit Award of $10,000. The laureates were selected by the president of the Organization Committee Yu Long, the renowned cellist Yo-Yo Ma and the members of the Stern family.

The prize went to two winners: one to the members of the Xiaoshuijing Miao Farmers Choir which is a four-part chorus group that combines the western traditional bel canto elements with the unique ethnic characteristics, and the other to Kayhan Kalhor who is an Iranian Kamancheh player, composer and master of classical Kurdish and Iranian traditional music.