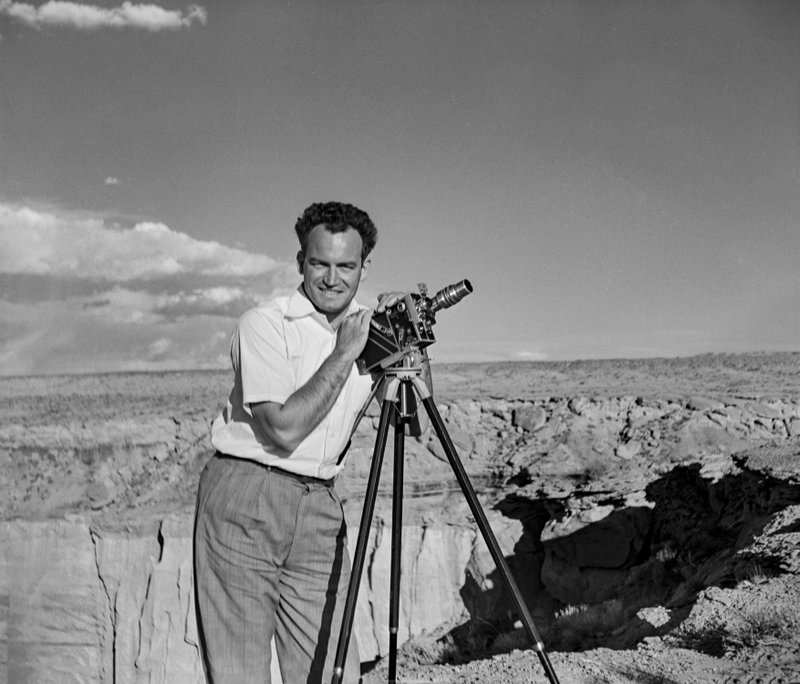 In Alison Goldwater Ross’ earliest memories of her grandfather Barry Goldwater, there’s always a 35mm camera hanging from his neck.

The senator photographed more than 15,000 images of Arizona’s landscapes and Native Americans over his lifetime. Twenty years after Goldwater’s death, Ross wants to preserve the Republican icon’s photographs, with some newly digitized images showcased this month in Arizona Highways magazine and next month at Western Spirit: Scottsdale’s Museum of the West.

The project was launched after Ross discussed her grandfather’s work with her uncle Michael Goldwater, the family historian since the senator died in 1998 at the age of 89. Now 55 and living in Atlanta, Ross said she adored accompanying her “bigger than life” grandfather on the Arizona campaign trail and meeting celebrities like Elizabeth Taylor. Like his other grandchildren, she called him by the nickname “Paka.”

“I practically had an anxiety attack just thinking about what was happening to the images. They had been sitting around for so long,” said Ross, the daughter of Joanne, the oldest of the four Goldwater children.

After consulting with family members, Ross in January formed the Barry & Peggy Goldwater Foundation, which holds the rights to the photographs. The project came together with funding from the Salt River Project, a water and power provider that supports local arts and culture.

All photographic film deteriorates as it’s exposed to moisture and heat, and Michael Goldwater said preserving the images had long been a concern.

“She’s really doing a great job getting interest in the project,” he said of his niece. “We totally support her. My father wanted his work saved for future historians and researchers.”

His father Barry was born in 1909 in Arizona Territory three years before statehood and took his first pictures as a boy with his mother’s Brownie, a popular box camera that introduced photography to the masses.

After his wife, Peggy, gave him a camera on their first Christmas together, Goldwater documented the diversity of Arizona’s tribes and landscapes, mostly in black and white with view cameras like the Graflex and Rolleiflex. Those images included the dramatic cliffs and sculpted mesas of places like the Grand Canyon and Monument Valley, the deeply lined face of an elderly Navajo man, and two young Navajo girls tending their sheep in the snow.

Goldwater made color photos of his family with the 35mm and had a movie camera as well.

“You can go anyplace in that state,” Goldwater said in a 1985 interview about the best location in Arizona to take pictures. “Anyplace. From the Mexican border clear up to the Utah border, it’s all photogenic. In the south you have the desert. You have the biggest stand of pine trees in the world in the central part. ... You can literally spend your life out there and never quite get it all.”

Goldwater’s work earned him a lifetime membership in the Royal Photographic Society and the praise of noted landscape photographer Ansel Adams, who described the senator as a “fine and eager” amateur photographer who was as accomplished as any professional.

Another granddaughter, Anna Goldwater Alexander, the daughter of Michael and director of photography at Wired magazine, called the senator a “statesman who recorded Arizona history through the lens of a camera” in Arizona Highways’ December issue.

“When I go back through his archive today, I can’t help wondering whether he realized his beautiful photographs not only documented history, but also revealed the sensitive side of his dynamic personality,” Alexander wrote.

As a politician, Goldwater wrote the best-selling “Conscience of a Conservative” and in 1964 famously declared that “extremism in the defense of liberty is no vice” when accepting the Republican nomination. The man known as “Mr. Conservative” lost the presidential race in a landslide to Democratic incumbent Lyndon B. Johnson.

Goldwater served five terms as a senator, from 1953 to 1965 and 1969 to 1987, and was succeeded by John McCain. The former Air Force pilot who served in WWII was also known as the elder party statesman who persuaded Richard Nixon to resign in 1974 when it became clear the president would not survive the Watergate investigation.

Arizona Highways regularly showcased Goldwater’s photographs over the decades, and this month’s special collector’s issue with 46 of his photographs quickly sold out.

“I never had the privilege of meeting the gentleman, but I feel like I know him,” said Arizona Highways Editor Robert Stieve. “He has been a big part of our history since 1938.”

Most of the photos showcased in the special edition also go on display Jan. 6 through June 23 at Scottsdale’s Museum of the West as Photographs by Barry M. Goldwater: The Arizona Highways Collection.

Although many images remain with the family, big parts of the collection are also housed in three institutions: the Center for Creative Photography at the University of Arizona in Tucson, the Hayden Library at Arizona State University in Tempe and the Heard Museum in Phoenix. Ross said the family commissioned the first bit of digitization, but the photography center next year will also start digitizing the hundreds of large format images there, with repair of each negative taking from two to eight hours.

Goldwater also was an avid collector of kachina dolls, wood carvings of Hopi spirits. He donated 400 of them to the Heard Museum in 1969.

Tricia Loscher, the western museum’s assistant director and chief curator of the Goldwater exhibit, said that as a Heard intern in the 1990s she was tasked with cataloging his kachina dolls. With the photo show, “I feel like I’m coming full circle,” she said.

Like Goldwater, Loscher is a lifelong Arizona resident, and she said she appreciated his photographs of the Southwest, images she said “could never be replicated in the Midwest, Northwest or any other place in the world.”

The photographs, she said, “reflect his own brand of sensitivity and clarity, which came from being a native of Arizona, the time in which he lived and the love and respect he had for life.”