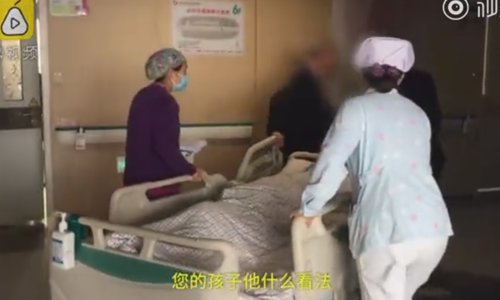 Being taken cared by nurses, a 67-year-old parturient woman (on the hospital bed) leaves the delivery room after safely gave birth to a baby girl on Friday in Zaozhuang, East China's Shandong Province. (Photo: Screenshot from Pear Video)

A 67-year-old woman and her husband claim they are the oldest couple in China to have a naturally conceived baby who was born on Friday. The baby girl is aunt to a niece who is 18 years her senior, and has sisters 40 years older.

"I don't care what my other kids think." said Huang, the 68-year-old new father after reports suggested his adult daughter had broken off ties with her parents after discovering her mother was pregnant with her third child.

Huang, who is a lawyer in Zaozhuang, East China's Shandong Province, told the media he named his baby girl "Tianci," which means "gift from heaven."

"The woman got pregnant naturally as far as we know," said a doctor in a hospital where the baby was delivered by cesarean section.

"There was no miracle. We are going to bring her up," Huang said.

An internet search of third child shows reports of a woman several years older than Tianci's mother giving birth to a baby through in vitro fertilization.

Netizens had a lot to say about the couple's late-in-life baby. Some called them irresponsible and worried the parents won't be able to provide for Tianci's future. Others said age is obviously no barrier to leading a fulfilling, active life in all respects.