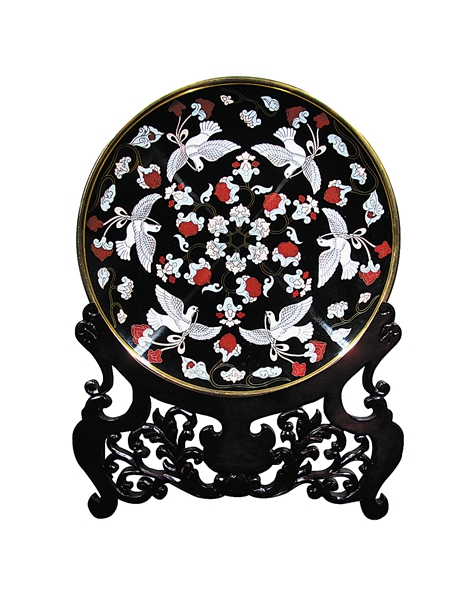 When construction of the Great Hall of the People began in 1958, then-premier Zhou Enlai suggested while overseeing the project that talented young Chinese have the opportunity to participate.

Chang's studies of the intricate patterns and motifs on the murals and Buddhist statues led her to incorporate these elements when designing artworks that used traditional Chinese crafts, such as porcelain, enamel ware and silk items.

Chang was assigned to the team designing the ceiling of the state banquet room at the Great Hall. Her designs of the ceiling patterns employed the symmetrical floral motifs and the color scheme of Dunhuang, and stood out among other proposals. But despite the elegance, her drawings were viewed as "not functional".

"Zhang Bo, one of the architects, said the designs looked quite beautiful but didn't meet the practical requirements of a banquet space," Chang recalls.

"He said I should take into consideration the ceiling's air vents and lights, and the overall architecture and the materials to be used."

Chang, now 88, says she later worked closely with architects and engineers for months to integrate the patterns with the building's structure, including its bases.

The project helped Chang's career to reach a new height as a designer and educator. She retired as the dean of the Central Academy of Arts and Design in 1998. She also designed decorations for some other spaces at the Great Hall in 2006 and 2008. Again, she adopted the patterns from Dunhuang.

It was her father, Chang Shuhong (1904-94), a painter and the founding director of the Dunhuang Academy, who inspired her to follow Dunhuang's art.

Chang Shana was born in France, and her parents returned to China amid wars. They went to Dunhuang, where Chang Shuhong decided to catalog and study the art.

Chang Shana, then 12, had to first cope with the harsh natural environment of Northwest China and later the agony of her mother divorcing her father. But Chang Shana's spiritual world was enriched by the murals and figurines in Dunhuang.

She learned painting from her father, an artist who graduated from Ecole nationale superieure des Beaux-Arts in Paris, the prestigious fine-arts school.

For six years, she made copies of the cave murals, learning also from staff members of the academy and dozens of artists who researched Dunhuang art.

Chang Shana didn't receive systematic training at a formal art school. However, Dunhuang was the first and most important "school" she attended.

She moved to Beijing in the 1950s. But throughout her life, she revisited Dunhuang many times. She regards it as her second hometown, her infinite source of inspiration.

Chang Shuhong dedicated decades to the preservation of Dunhuang art until he was transferred to Beijing in the 1980s. In a letter to his daughter, he wrote: "Shana, don't forget you are from Dunhuang. It is time to raise the profile of Dunhuang to a higher level."

Chang Shana knew that her father hoped she would revive Dunhuang's legacy in a modern way to reach out to more people.

Chang Shuhong is remembered as the "patron saint of Dunhuang", while Chang Shana is acknowledged as the person most committed to deciphering the mysticism of Dunhuang. As she studied and categorized the various types of imagery that appear in Dunhuang murals, such as flowers, jewelry and the hand gestures of deities, she endeavored to use the elements in her designs.

A critical figure in her career as a designer was Lin Huiyin (1904-55), an architect and scholar. After seeing an exhibition of mural copies by Chang Shuhong and Chang Shana in Beijing in the early 1950s, Lin was impressed by Chang Shana's talent, and offered her an assistant's job at Tsinghua University's architecture department where Lin and her husband, Liang Sicheng, then taught.

The architect couple believed that people should find novel ways to integrate the essence of classical Chinese art into industrial designs.

"Lin was sick and often bedridden, and we assistant teachers normally joined her at home at 10 am to begin the research work," Chang Shana recalls.

In 1952, Chang Shana was commissioned to design gifts to be presented to international guests attending the Asia and Pacific Rim Peace Conference in Beijing. Following Lin's guidance, she designed a silk scarf featuring the patterns on the caisson ceilings of Dunhuang's grottoes.

"Lin asked if I had seen the Dove of Peace drawn by Pablo Picasso (the emblem of the First International Peace Conference in Paris in 1949). She suggested I add doves between the patterns of the caissons, and that I better use doves in the Dunhuang murals.

"I remembered Galina Ulanova, a great Russian ballerina, after receiving the scarf, saying, 'It's the best gift presented (to me) by New China.'"

Chang Shana was one of the earliest domestic scholars to carry out research and lecture about the vocabulary of the patterns seen at Dunhuang. She has compiled several catalogs about the outfits and decorative motifs in the murals. She has held exhibitions of her mural copies and mural-inspired designs.

"Chang Shana endured many hardships during her residence in Dunhuang. She learned to keep up the artistic spirit from her father and other researchers and artists," says Wu Weishan, director of the National Art Museum of China.

"In Dunhuang, Chang Shuhong discovered the nobility of traditional art, while Chang Shana discovered the dynamics of these decorative motifs that had survived hundreds of years. She has guided generations of designers to pass on the spirit of Dunhuang."

Chang Shana says the pictorial elements of Dunhuang are so diverse that they can be used in modern objects.

"It's fine that we learn from other countries to develop our creative industries," she says. "But ultimately, we should go back to our origins. We need to allow the core of our cultural traditions to thrive, and Dunhuang is one such important source."