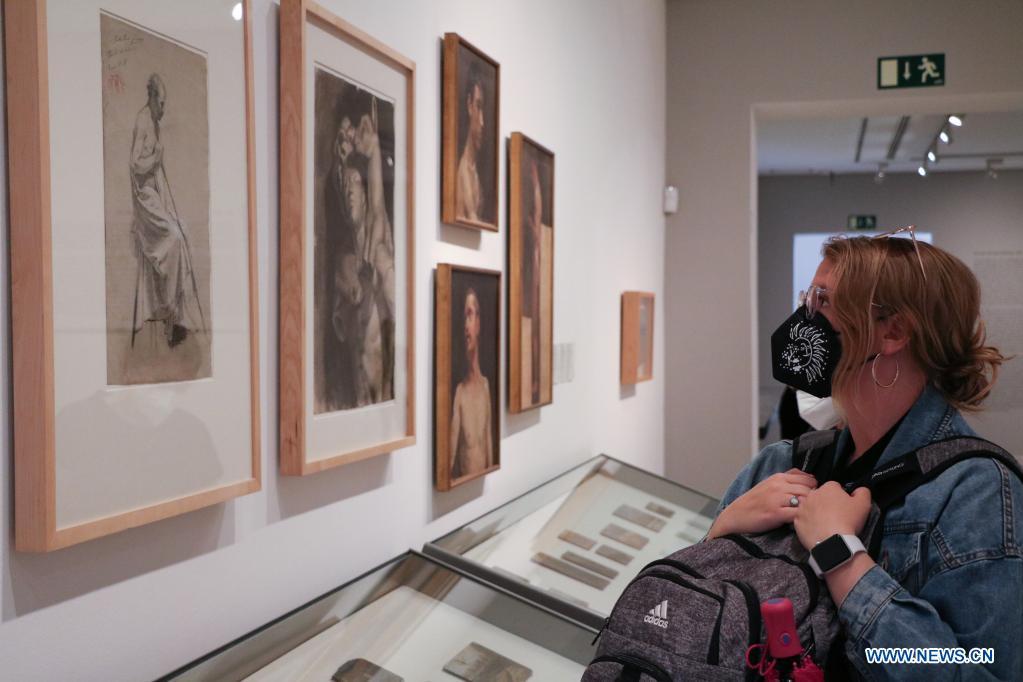 A woman views exhibits at Picasso Museum in Barcelona, Spain, on May 11, 2021. (Photo: Xinhua)

Greece on Tuesday said it had recovered a Picasso painting personally donated by the Spanish master to the Greek people, almost a decade after it was stolen alongside two other artworks in an audacious heist at the National Gallery.

'Head of a Woman', gifted by Pablo Picasso to Greece in 1949, was recovered in Keratea, a rural area some 45 kilometers southeast of Athens, officials told a news conference.

Mendoni said the painting would have been "impossible" to sell as it had a personal inscription by Picasso on the back – "For the Greek people, a tribute by Picasso."

The artist had given the cubist painting to the Greek state in recognition of the country's resistance to Nazi Germany during a painful 1941-44 occupation.

Another painting stolen in the same heist in January 2012, 'Stammer Windmill' by Dutch painter Piet Mondrian, was also found.

It was originally believed that two men broke in, cutting the paintings from their frames.

But police have arrested just one person, a 49-year-old Greek man, in connection with the case.

A sketch by 16th-century Italian artist Guglielmo Caccia, better known as Moncalvo, was also stolen in the same robbery. But state television reported it was damaged in the heist and discarded.

A state report found that the National Gallery's security had not been upgraded for over a decade, with the then police minister calling safeguards "non-existent."

Several areas in the museum were out of range of security cameras, while the alarms were faulty and prone to ringing gratuitously.

In addition, the gallery was on reduced security staffing at the time owing to a three-day staff strike.

On the night of the heist, the burglar had set off an alarm by manipulating an unlocked door to send the sole guard elsewhere in the building.

The guard told police he ran after one thief, who dropped another Mondrian oil painting.

The theft, at the height of the Greek debt crisis, was followed a few months later by another high-profile robbery of nearly 80 archaeological artefacts from a museum in Olympia dedicated to the ancient Olympic Games.

The National Gallery holds a prominent collection of post-Byzantine Greek art, as well as a small collection of Renaissance works and some El Greco paintings.

It reopened in March after an extensive renovation that cost over 59 million euros (US$70 million) and doubled its capacity.