CULTURE Greek marathons: where runners pit themselves against history

Greek marathons: where runners pit themselves against history 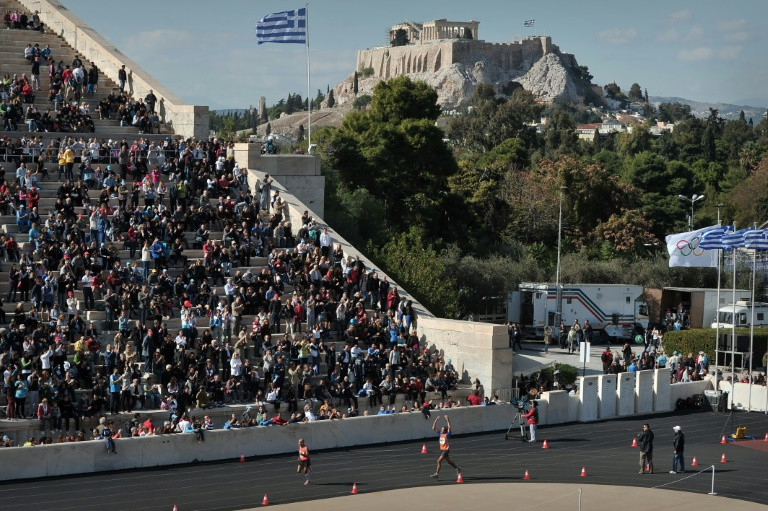 Every year runners from all over the world take part in the classic Athens marathon, which finishes within sight of the Acropolis. Photo: AFP

Athens's classic marathon is the grandsire of all long-distance races and on the bucket list of most self-respecting runners -- but for antiquity buffs, there are other Greek races with an even stronger historical pedigree.

The 42.2-kilometre (26.2-mile) race, named after the small town of Marathon near Athens, has become a byword for 'ordeal' and one of the highlights of every summer Olympics.

It is also largely a late-19th century creation, one of the few sports events specifically crafted to stir interest for the Olympic Games's revival in Athens in 1896.

"If you go to Athens, see if a race can be organised from Marathon (to Athens)... it would give a flavour of antiquity," Breal wrote to Coubertin in 1894.

A classicist, Breal knew the legend of the runner Pheidippides, dispatched to Athens after the Battle of Marathon in 490 BCE to announce, against all odds, that an invading Persian army had been defeated.

"If we knew the time required by the Greek warrior, we could set the record," Breal wrote.

The trouble was, ancient writers left no conclusive evidence on the runner's identity, let alone the exact route he followed.

Herodotus, writing decades after the battle, makes no reference to Pheidippides at Marathon. Later writers have called the legendary runner Philippides, Eucles and Thersippus. 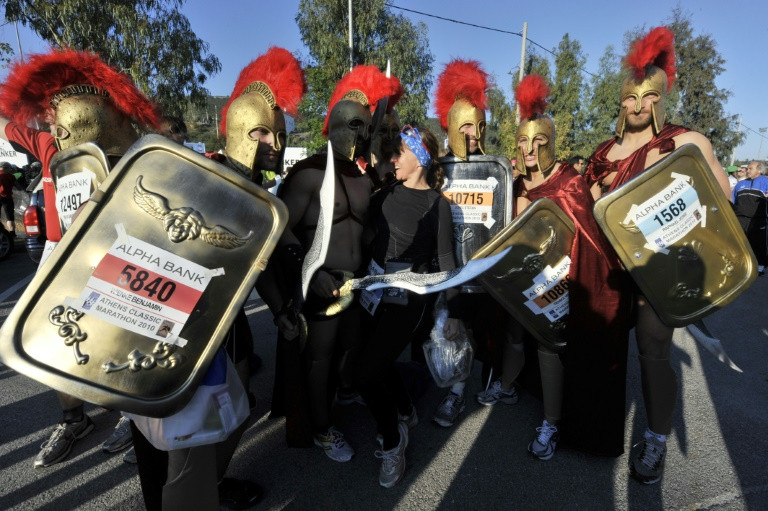 The Athens marathon is on the bucket list for many runners, and some take the opportunity to dress up for the occasion. Photo: AFP

But Herodotus, who based his history on interviews with eye-witnesses of the battle, says Pheidippides managed an even greater achievement -- running some 240 kilometres (150 miles) from Athens to Sparta and back.

Athens had wanted Sparta's renowned warriors to join the fight against the Persians. And Pheidippides was sent to deliver the message.

"He reached Sparta on the very next day," Herodotus wrote.

Sadly, the mission was a failure. The Spartans were in the middle of a religious festival honouring the god Apollo, which prevented them from fighting.

So Pheidippides ran back to Athens empty-handed.

Some 2,400 years on, the episode prompted an RAF wing commander named John Foden to wonder if a modern man could cover the distance in 36 hours.

Foden, who passed away last October, duly travelled to Greece in 1982 with four other RAF officers to test the theory.

He and two others were successful in completing the distance, and the modern ultra-distance Spartathlon event was born.

With an elevation range from sea level to 1,200 metres through rough mountain footpaths, partly in the dead of night and frequently in the rain, the Spartathlon is grueling.

Only about half of those register finish.

Participants have described the experience as life-changing.

"I have never seen a group of strangers so closely united and together, ever in my life," said Briton Paul Beechey after this year's race.

"It is very demanding," said Jo Manta, who set a Spartathlon Greek women's record this year at under 31 hours. "Runners face hard tarmac and alternating gradients, and after a distance the strain from the monotonous shocks to the whole body stretch the difficulty level to extremes," she told AFP.

Held in September, the race culminates at the statue of King Leonidas, the Spartan leader who led 300 warriors to the famous last stand against the Persians at Thermopylae in 480 BCE.

Runners take part in a 90-metre dash at the Ancient Nemea stadium where the Nemean Games took place until the third century BCE. Photo: AFP

But when it comes to actually stepping into history, there are few experiences like the Nemean Games.

Alongside Olympia, Corinth and Delphi, Nemea hosted one of the four Panhellenic Games of ancient Greece.

Held in the very stadium where the Nemean Games took place until the third century BCE, the event invites participants of all ages to step into stone grooves used by ancient athletes.

The starting line or balbis, "was certainly in position by 320 BCE, and perhaps a decade earlier," affirms Stephen G Miller, the Berkeley archaeologist who excavated the stadium in 1973 and has helped supervise the Games's revival since 1994.

The Games are now held every four years in June, focused on "education by, emulation of, and contact with ancient Greece", Miller told AFP.

Runners race in white tunics and no shoes. 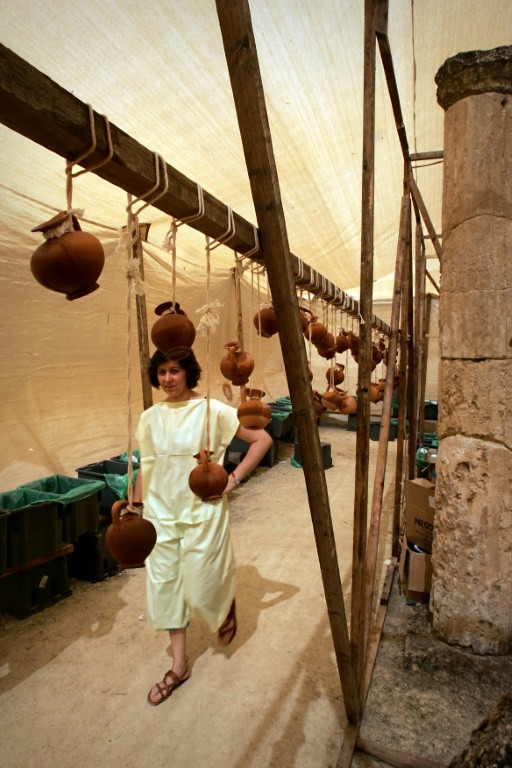 A volunteer posing as 'slave' walks in the remains of the ancient locker room at the Ancient Nemea stadium at the revival of the Nemean Games. Photo: AFP

Volunteers posing as 'slaves' provide assistance in the remains of the ancient locker room, while black-robed 'judges' enforce the rules, wielding a switch to flog lawbreakers, as was done in ancient Greece.

The race is launched with a hysplex, a wooden starting gate whose reconstruction from the ancient version took 25 years "and most of my hair", admits Miller.

The runners take part in a 90-metre dash, grouped by age and gender, with any over the age of five eligible to participate.

Victors are crowned with wreaths of wild celery.

The area is also where according to legend, Hercules slew the Nemean Lion as his first labour.

So there is also a 7.5-kilometre race to Nemea from the neighbouring village of Kleonai, where the feat was apparently accomplished.

This time, modern footwear is allowed.