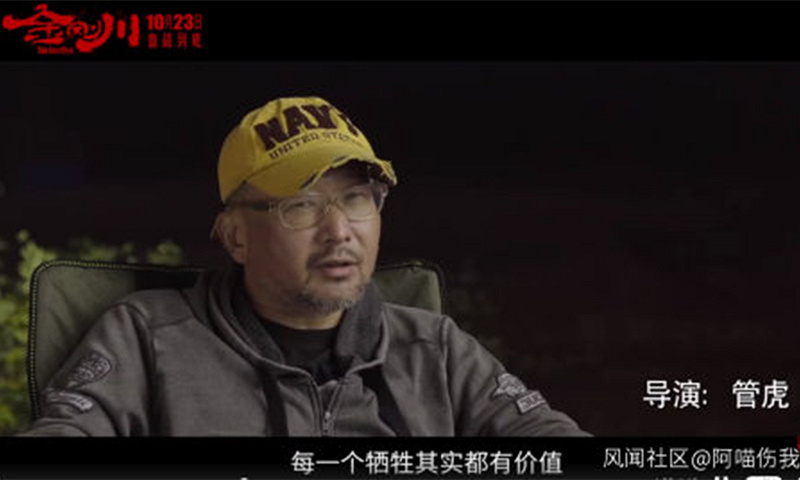 Guan Hu, co-director of the newly-released Korean War blockbuster Sacrifice (or Jin Gang Chuan), was pushed to the forefront of public debate on Chinese social media on Friday, the day of the film's debut. With tens of thousands of moviegoers rushing to cinemas across China to enjoy the patriotic war epic, numerous netizens criticized Guan for "inappropriately" wearing a "US navy cap" in a promotion video of the film.

The cap that Guan wears in the video is a yellow one with "UNITED STATES" and "NAVY" on it. The cap looked "extremely awkward" on Guan when talking about a film being made to commemorate the 70th anniversary of China's entry into the War to Resist US Aggression and Aid Korea (1950-53), also known as the Korean War, Chinese netizens said.

Screenshots of Guan wearing the cap sparked anger on Weibo on Friday, with users criticizing the director for "disrespecting" the Chinese People's Volunteer (CPV) army and their sacrifices in the war.

"The US navy was one of CPV's biggest enemies, causing lots of deaths and injuries to our soldiers at the beginning of the war," a user wrote. "How could Guan wear a cap in support of the 'enemy' when promoting a movie in memory of the CPV?"

His complaint was echoed by another user, who compared Guan's behavior to a hypothetical situation of Steven Spielberg wearing a Nazi cap at promotion events of Saving Private Ryan, which he said would be "definitely not acceptable."

Some users also criticized Guan's posture in mourning for the martyrs who died in the war - bowing with his hands behind his back - as improper and impolite. His posture was shown in a video clip published by Sacrifice's promotional team in late September and was later deleted.

Guan's controversial cap looks quite antipathetic in the video, said Beijing-based film critic Shi Wenxue. "The cap might be fine in private but is ill-suited in a public video related to a film based on resisting US aggression," he told the Global Times on Friday, saying that the cap could be interpreted as a sort of [ideological] sign on such a special occasion.

"Guan and Sacrifice's promotional team should reflect on this 'mistake' and prepare for any bad publicity it may cause," Shi said, noting that Chinese actress Zhao Wei made a public apology in 2001 after facing public outrage for wearing a skirt resembling the Japanese army flag in a fashion shoot.

As a filmmaker, not a politician or public representative, Guan doesn't have to double-check every small aspect of his life to fit the public's expectations of "patriotism," said movie critic and film producer Tan Fei. "Guan shows his patriotism through his movies," Tan told the Global Times on Friday.

Prior to Sacrifice, Guan directed another blockbuster, The Eight Hundred, which depicts Chinese soldiers' resistance against the invading Japanese army during the Battle of Shanghai in 1937. The film has so far grossed more than 3 billion yuan ($448.8 million) at the Chinese mainland box office since it debuted on August 21.