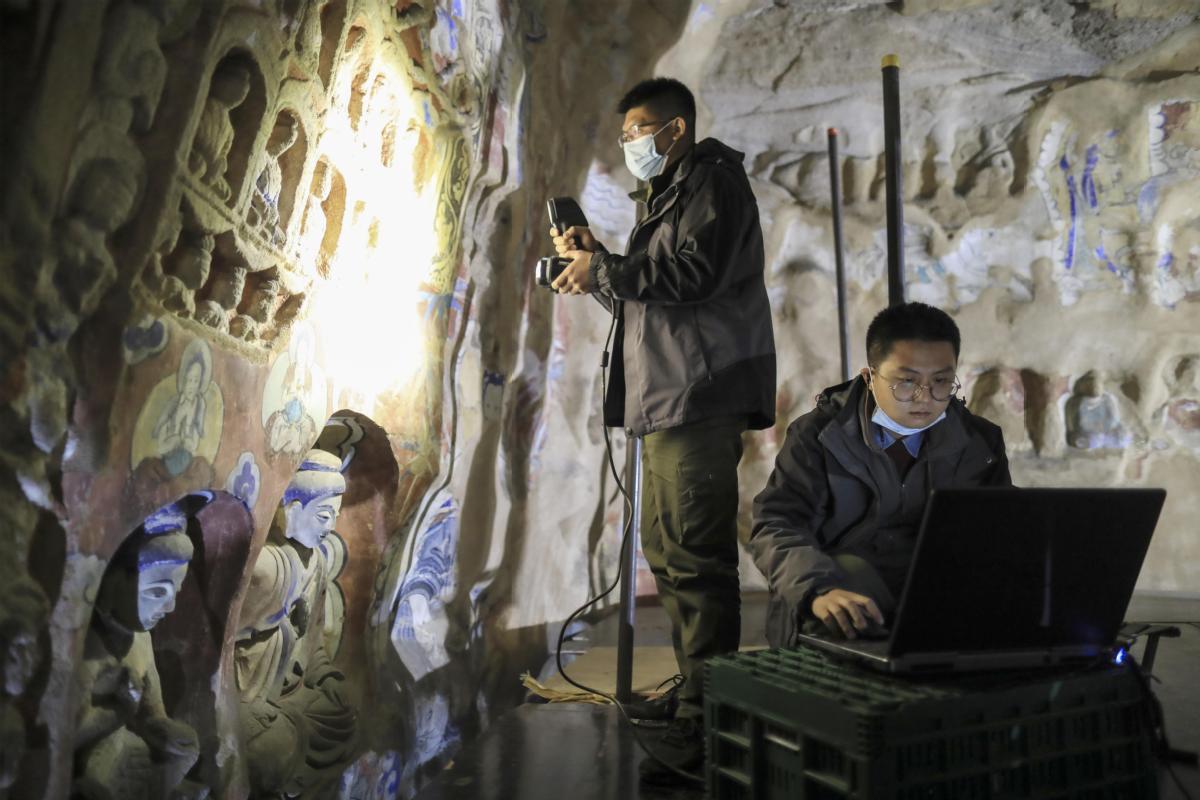 The State Council issued a set of guidelines to enhance protection and studies of the nation's grotto temples.

According to the guidelines, all "major threats" to the safety of the grotto temples should be resolved by 2022, and security arrangements should be made to cover all such sites across China by then. The guidance, drafted in late October, was publicly released on Wednesday.

Within the next five years, a dynamic system for protection is to be established to enable close cooperation among central and local government departments with active participation of the public.

Grotto temples－sites carved into mountains or rocks and frequently visited by religious pilgrims－were introduced into China along the ancient Silk Road in the third century. They became a pillar of Chinese Buddhist art.

Prominent examples became UNESCO World Heritage sites between 1987 and 2014, including Mogao Caves in Dunhuang, Gansu province; Longmen Grottoes in Luoyang, Henan province; Yungang Grottoes in Datong, Shanxi province; and some other Buddhist grottoes along the Silk Road in Gansu and the Xinjiang Uygur autonomous region.

President Xi Jinping, after visiting Yungang on May 11, called for protection of grotto temples to be given priority and urged better presentation of their cultural legacies marking exchanges among different ethnic groups in order to enrich the Chinese nation's sense of a shared community.

It emphasized preservation of the sites, which touch on the inheritance of fine cultural traditions and Belt and Road Initiative values highlighting communication and mutual learning among different civilizations.

"This is the country's first national-level strategic guidance on protection of grotto temples since the founding of New China, and it is like a manifesto to strengthen our cultural confidence through relics," said Lu Jiwen, deputy director of the Yungang Grottoes Research Academy.

"Seeing the grottoes in depth, it will also help people to better understand Chinese philosophy and humanities from a historical perspective," he said.

Lu said the aging grotto temples are fragile and are faced with geological hazards compounded by weathering and unstable rock foundations. This makes their consolidation and preservation an urgent matter, he said.

Technological breakthroughs to handle these issues are still lacking, said Liu Yuzhu, director of the National Cultural Heritage Administration. "The timely guidance meets the need to overcome bottlenecks in protection," said Liu, who answered questions from reporters via written statements on Friday.

A special national fund will be allocated within the next two years to finance projects for developing materials and techniques for restoration.

Since 2012, about 1.04 billion yuan ($157 million) has been allocated in national fiscal expenditures to help protect grotto temples.

But Liu said that scientific preservation of statues and frescos in the grottoes had just started in earnest, and many medium-sized and small grottoes have not been properly preserved in spite of some key sites being consolidated and regularly maintained.

Nationwide research on the status of all the country's ancient grottoes－defined as those carved before 1911－began in September and will continue until June, Liu said. The work will be used to compile a national directory of grottoes and prepare a list of tailored renovations.

A regular evaluation system also is planned to establish a national database of "health" records for the grottoes.

"Prevention of disease is as important as treatment," he said.

Archaeology is another focus of the guideline, which provided a foundation for better display of the cultural significance of the grottoes. But there is not yet enough expertise in niche studies－Liu estimated that only 20-odd experts nationwide are fully devoted to archaeological studies of grotto temples.

To fill the gap, academic foundations nurturing such expertise among graduate students will be set up at Peking University, Zhejiang University, Lanzhou University and Dunhuang Academy by 2022, according to the guidelines. Archaeological reports on the nation's key grottoes are to be published by 2035.

Cross-border archaeological studies and China-led renovation projects on overseas heritage sites with links to grotto temples will be highlighted in the next few years.

Lu from the Yungang academy also said he had great expectations for academic cooperation among various research institutes thanks to the guidelines, which he considered to have established a national platform for coordination.

"When researchers work together, we can have our voice better heard in international academia," he said.

More studies will also lead to better scientific tourism management of the sites. Last week, the National Cultural Heritage Administration and Ministry of Culture and Tourism jointly released an announcement instructing the management offices of all ancient grotto temple sites to set caps on the number of daily visits by the end of this year to ensure the longevity of cultural treasures.

A series of exhibitions on Chinese grotto temples will tour overseas, the guidelines said, and digitization will enable more relics to be seen virtually and academic studies to be more conveniently shared.