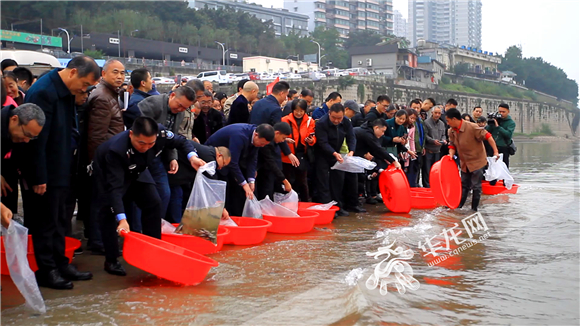 CHONGQING, Nov. 14 (Xinhua) -- Nearly 500,000 rare fish were released into the Yangtze Thursday in a national nature reserve at the upper reaches of the river in southwest China's Chongqing Municipality.

According to the municipal forestry bureau, the batch of released fish included 22 Yangtze sturgeon weighing 1 kg each, 22 mullet and eight other species.

Jiang Huamin, a senior fisheries engineer with the bureau, said Chongqing usually organizes multiple releasing activities throughout the year, and the water temperature now is most suitable for release.

The released fish will help restore the population of endangered fish unique to the Yangtze, purify the water and raise ecological protection awareness among local people, said Yao Weizhi, a professor at the fishery resources and environment research center of Southwest University.A fish preservation team will be cruising by the river for a week to increase fish's survival rate, the bureau said, adding that it will continue to crackdown on illegal fishing, overfishing and sand mining in the river.