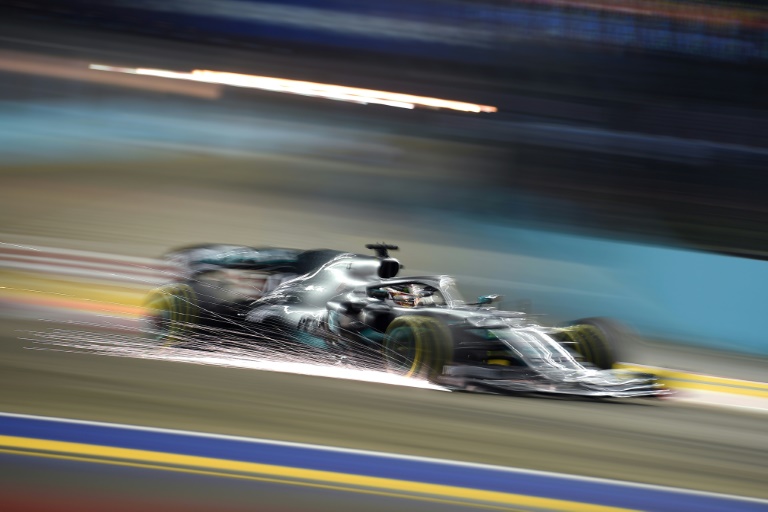 Lewis Hamilton kicked up the sparks in the streets of Singapore, setting the fastest lap in Friday's practice. (Photo: AFP)

Championship leader Lewis Hamilton lived up to his status as pre-race favourite for the Singapore Grand Prix when the Mercedes driver soared to the top of the timesheets with a storming lap in the second free practice session at a floodlit Marina Bay Street Circuit on Friday.

The Briton, who has won four times in Singapore, is well on course for a sixth world title after recording eight victories in 2019.

His scintillating form after two practice sessions around the demanding 23-turn layout suggest he will be celebrating a ninth triumph of the campaign on Sunday night.

Hamilton spent the first session churning out race simulation laps on the more durable hard compound tyres as he clocked the third fastest time behind Red Bull's Max Verstappen and Ferrari's Sebastian Vettel, who had set their best laps on the quicker soft tyres.

However, once the Briton was unleashed with softs fitted on his Mercedes and 50 minutes to go in the second session, he immediately clocked a day's best 1:38.773 seconds to leave all but Verstappen trailing in his wake.

Hamilton's lap was far from perfect as he made a number of mistakes in the first two sectors, but he was still able to record a time 0.184 seconds quicker than his Dutch rival with Vettel leading the rest of the pack a distant 0.818 seconds off the pace.

The Mercedes was even more impressive during the race simulations, but Hamilton will be wary of the threat posed by Red Bull and the Ferraris of Vettel and Charles Leclerc, who has won the last two races.

The Italian team was consistently the fastest in the first sector before losing time through the more technical sections of the layout.

Valtteri Bottas, perhaps mindful of the heavy crash that ended his first practice session, drove cautiously and was more than a second slower than his Mercedes team mate in identical conditions, leaving his chances of eating into Hamilton's 63-point championship lead looking remote at best.

After Bottas smashed into the barriers in the afternoon, the second session passed without any major drama.

Alex Albon's low-speed crash into the run-off area at Turn 10 and a late spin by Romain Grosjean were the only two incidents to bring out yellow caution flags.

Qualifying for Sunday's race takes place at 1300 GMT on Saturday.