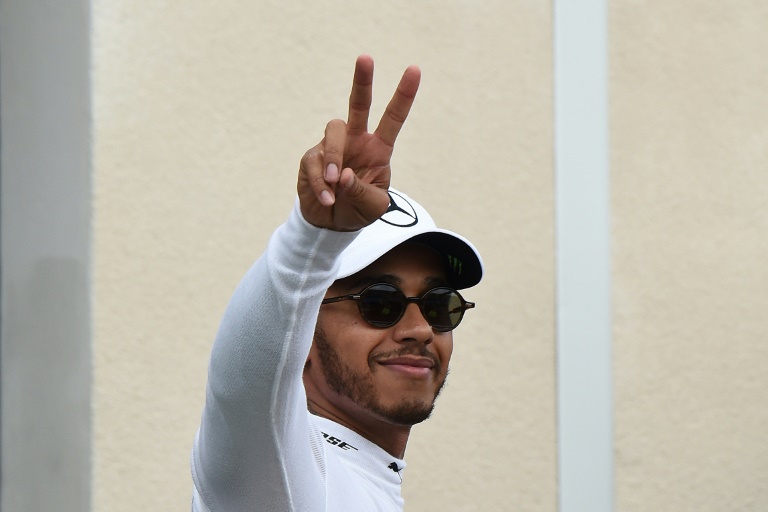 Lewis Hamilton secured pole position for the French Grand Prix ahead of his team-mate Valtteri Bottas as Mercedes dominated Saturday's crash-hit qualifying session to sweep the front row of the grid.

The four-time world champion clocked a best lap in one minute and 30.029 seconds to grab the 75th pole position of his career ahead of Bottas, giving himself a perfect chance to regain the initiative in the title race in Sunday's race.

Championship leader, and fellow four-time world champion, Sebastian Vettel of Ferrari was third, three-tenths off the pace, ahead of Max Verstappen and his Red Bull team-mate Australian Daniel Ricciardo.

Kimi Raikkonen was sixth in the second Ferrari ahead of Carlos Sainz of Renault, Charles Leclerc of Sauber, Kevin Magnussen and his Haas team-mate Romain Grosjean, who crashed during the top-ten shootout, halting the session for eight minutes.

"That wasn't too bad," said Hamilton. "It feels great to be back in France –- it's a beautiful place and we got a great response from the crowd."

Bottas said: "It wasn't a bad lap, not perfect either. I've been struggling to get perfect laps this week -– I was catching up rung by rung, but a one-two here is great. The engine feels good, fresh and powerful."

Vettel admitted he may have pushed too much but was happy with third place.

"I raced in the last French Grand Prix in 2008 and it is amazing to see so many people here and all the excitement for all of us. It is nice to be here –- there's a lot of colour, so it really comes alive."

On an initially dry track following heavy rainstorms, which had curtailed final free practice, the air temperature was 22 degrees Celsius and the track 30 when qualifying began.

Mercedes took control and Hamilton clocked the best time in Q1, which ended, as rain began to fall, with both McLarens and both Williams eliminated -– a sad contrast to the pomp of the once-great British teams, when the French race was last held at the Paul Ricard Circuit 28 years ago.

The luckless New Zealander will start Sunday's race from the back of the grid after being handed a heavy penalty for replacing engine parts.

Hamilton's pace maintained Mercedes supremacy in every session from Friday morning, but as the rain intensified in Q2 he was struggling for comfort in his car.

It did nothing to slow him and as soon as Bottas had gone fastest, Hamilton cut his time by half a second with a scorching lap. Both men were clearly making best use of the new upgraded Mercedes engines.

Ferrari responded by going out on ultra-softs –- Mercedes were on super-softs –- and Vettel jumped to second, Raikkonen to third as the rain relented and the track became faster in the final dramatic minutes of Q2.

A flying late lap by Leclerc lifted him to 10th for Sauber, pushing Esteban Ocon and his Force India team-mate Sergio Perez out of the shootout in 11th and 13th, either side of Nico Hulkenberg of Renault.

Pierre Gasly of Toro Rosso and Marcus Ericsson in the second Sauber were also eliminated.

The top-ten Q3 shootout began with Ferrari hastening to the fray. Hamilton followed and, after the first flying runs, he and Bottas topped the times before the session was red-flagged when Grosjean crashed at Turn Three.

He was unhurt and after climbing from his car walked back to the pits with his helmet firmly in place, before the session resumed and Hamilton scorched to pole on his final flying lap.